Humans may affect the physical climate, but collectively our actions completely determine the investment climate. And we create some strange effects at times. One curious investment phenomenon discovered in the early 1980s is the January Effect - during January, small cap stocks typically have far outperformed large cap stocks and generally have their best month of the year.

In the best-selling book, Stocks for the Long Run, finance professor Jeremy Siegel says that US small cap stocks in the month of January over the period 1925 through 2006 had average returns of 6.1% while the large cap S&P 500 managed only 1.6%, a huge difference of 4.5%. It did not happen every single year, but in all that time, the S&P 500 beat small caps in only 16 Januaries.

The Effect is not just confined to the USA either, as the returns in many other countries, including Canada, exhibit the same pattern.

What causes the January Effect? Despite numerous studies over the many years since its discovery, there is no certain explanation, though a raft of possibilities have been suggested, including: December tax loss selling, especially by small investors who tend to dominate as small cap investors; year-end bonuses being invested; window dressing by fund managers (who sell stocks early in December to get rid of the losers and then buy them back in January); fund manager selling to lock in bonuses once the year's gains have been achieved and; year-end availability of accounting and investment performance data that drives buying.

Does this provide a sure-fire way to make profit? Given that the Effect has been observed most years and that we know that the exact time during which the major gains occur is from the last few trading days in December to mid-January, one could follow the simple trading strategy - buy small caps at the end of the year and sell at the end of January, or perhaps temporarily swap out of large caps into small caps. The problem is that word has got round and other investors have evidently already been doing this (or perhaps the underlying causal conditions have changed). The January Effect has diminished considerably in recent years. Anthony Yanxiang Gu's The Declining January Effect: Experience of Five G7 Countries 2006 paper says it has gone down in Canada, France, Germany, Japan and especially in the UK. In the USA, according to The Disappearing January/Turn of the Year Effect: Evidence From Stock Index Futures and Cash Markets written in 2004 by Andrew C. Szakmary1 and Dean B. Kiefer, the Effect has gone away entirely. For more info, see Behavioural Finance's annotated and linked list of January Effect research papers.

Is the Effect reduced but not gone? Let's see what has happened in recent years since these studies. Our table below uses familiar ETFs to represent markets in the USA - Large Caps by SPDR S&P 500 ETF (symbol: SPY) and Small Caps by iShares Russell 2000 Index (IWM) - and in Canada - Large Caps by iShares S&P/TSX 60 Index Fund (XIU) and Small Caps by iShares S&P TSX Completion Fund (XMD). In only two of the last five years has it happened in the USA but it has continued in four out of five years in Canada. So maybe, in Canada at least, the Effect is down but not out. 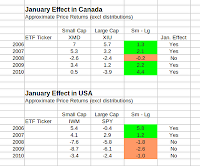 The big question is whether it is worth trying to make a trading profit on the phenomenon. That is a decision every individual investor must make for him or herself. It may be helpful to note that Gu found the Effect to be weaker during periods of slow GDP growth (nowadays), during high inflation (not really the case today) and during high market volatility (can change radically in an instant - one way to check is the CBOE Volatility Index).

How to trade on the January Effect:
The investment climate has likely changed and what used to be a hot investing wind may be more like a warming January thaw. That's still much more welcome than a severe cold snap.

Disclaimer: this post is my opinion only and should not be construed as investment advice. Readers should be aware that the above comparisons are not an investment recommendation. They rest on other sources, whose accuracy is not guaranteed and the article may not interpret such results correctly. Do your homework before making any decisions and consider consulting a professional advisor.
Posted by CanadianInvestor at 11:58

I was surfing net for some finance articles when I got your site and found your articles very unique and interesting.

I am impressed with your site as it is helping people in taking their financial decision. So, I would like to send an article based on your theme to post in your site. My article will be unique and quality one and also help your site to get more traffic. In return you will get a back link from a quality site.

Waiting for your valuable response.

Hi Sandy,
Thanks for the compliment but my blog policy is to write all my own posts. Best investing success to you.
Jean