Hard-pressed governments everywhere are redoubling their efforts to find tax evaders, one of the prime targets being people who hide investments in distant tax havens. Splashy news like the recent CBC post Massive data leak exposes offshore financial secrets heighten the profile of the issue. Everyone should pay their fair share of taxes but innocent people who actually do pay all they owe can get caught in the crossfire through the strict rules put in place to catch cheats. The consequences can be nasty with penalties easily running into thousands of dollars.

Many situations can cause an investor to get exposed to and possibly caught in the tax penalty net:

There's one key form that investors need to check whether they need to complete and file, the innocuously titled Foreign Income Verification Statement Form T1135. As can be seen below, the form asks mostly about assets though there is a question about total foreign income. 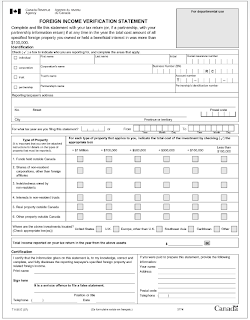 Here are some of the basics of the T1135, bearing in mind that we have summarized and the official source of the government pages, mainly the tax collector, the Canada Revenue Agency, contains more complete information. A tax accountant can be extremely useful to interpret and give guidance on "what ifs" and other scenarios not covered. In case of doubt, it is best to get professional advice since the bad consequences of being wrong are so severe.

Who is subject to the T1135?
What are the criteria for the T1135 filing requirement?
If the "who" above owned during the past tax year:
What must be reported?
What foreign investment property is excluded?
What are the penalties?
For not filing, or filing late, the penalties are severe per this CRA webpage, whether or not any foreign tax is owing or undeclared: $25 per day, up to $2500 per year, repeated for each year filing is missed, even when it is an innocent mistake (e.g. when all foreign income has been declared and tax paid!) is very harsh, as accountant The Blunt Bean Counter noted.

The CRA is unforgiving, as shown by the comments and laments on the T1135 Financial Webring thread, on this BritishExpats.com discussion, by this Advisor.ca post by Jamie Golombek on T1135-sparked court cases and another on a specific case where an honest first-time mistake did not escape the penalty. One lucky taxpayer did successfully fight the penalty but this more the exception than the rule. Potential Gotcha #4 - the fact that all foreign income has been declared and taxes paid does not excuse the necessity of declaring foreign assets and filing the T1135.

With the April 30th deadline only a few days away, there's still time to comply and avoid unnecessary problems, even if your tax return has already been submitted. Figure out where you stand and take action.

Disclaimer: this post is my opinion only and should not be construed as investment or tax advice. This topic in particular can be complicated and it can have severe unwelcome consequences. The commentary rests on other sources, whose accuracy is not guaranteed and the article may not interpret such results correctly. Do your homework before making any decisions and consider consulting a professional advisor.
Posted by CanadianInvestor at 18:24

Thanks, this is a great about about the T1135 situation. My biggest concern was whether Vanguard ETFs held in a Canadian brokerage would be subject to this requirement. It looks like the answer is a clear yes.. which leaves only a few more days to file the T1135 before the deadline.

Anon, good question. I think the answer is that the relevant figure is the cost of the call options themselves not the value of the stock exposure, since the option gives the right, not the obligation, to buy. This is in contrast to the example in the CRA's FAQ where a property is purchased for $50 down but is worth $500k; in that case the T1135 must be submitted. see http://www.cra-arc.gc.ca/tx/nnrsdnts/cmmn/frgn/1135_fq-eng.html#Question19.

A certain adrian2 expressed this opinion as well in this Financial Webring thread http://www.financialwebring.org/forum/viewtopic.php?f=32&t=110637&start=75. Calling the CRA might or might not get you a confirming answer, or, as suggested in the post, talk to an accountant for a professional opinion. Again, note, I am not an accountant. In case of doubt, the safe action is to file the T1135.