Ways to Get Steady Dependable Income from Mortgages

Every adult Canadian knows what a mortgage is and understands that it is a loan against property on which interest must be paid regularly without fail or else there is risk of having the property taken over by the lender. Many of us are mortgage borrowers to buy a home at some point in life. If we put the shoe on the other foot as investors, mortgages can have a definite appeal as a steady income-producing investment that should be quite secure (how many people would easily or willingly default and lose their home?).

Let's look at the alternative ways a Canadian investor can buy into mortgages. Here is a comparison table of the key features of the alternatives we review below.

Mortgage Investment Corporations
MICs are specialty funds to pool investor capital for lending out as mortgages, primarily for residential buildings but with a portion allowed for commercial properties. MICs have a long history going back to the 1970s when the federal government modified the Income Tax Act (in section 130.1) to allow income from mortgage interest to be passed through tax-exempt in the MIC to individual investors for taxation in their hands. Average Joe, instead of paying interest on a mortgage on his home, can turn the tables, invest in a MIC, and collect interest instead.

More detail:
1) CanadianFinancialDIY's Ins and Outs of Mortgage Investment Corporations,
2) Interview about the origins and workings of MICs with Wayne Strandlund, CEO of one of the biggest private MICs Fisgard Capital Corporation on the Canadian Mortgage Trends.com blog,
3) Regulatory restrictions on who can invest in private MICs, which varies by province, also on Canadian Mortgage Trends.com
4) PIC-a-MIC, Fisgard's more-than-thorough 27 point due diligence checklist for investors. This checklist serves very well for any of the types of mortgage investments we discuss now.

Four MIC flavours - The tax-exempt MIC status can be, and is, available in four different types of corporate structures and investor vehicles.
Public Corporation but not a MIC
This publicly-traded company concentrates on mortgages but does not have the tax status of the MIC.
Mortgage Mutual Funds
There are several dozen (37 were found in GlobeInvestor Fund Lookup by typing in "mortgage" as a fund name search term). Such funds typically buy mortgages created by other companies and have a lot of lower yield guaranteed mortgages along with some short term bonds so their yield is less overall.

Mortgage REITs in the USA
The attraction of such funds within registered retirement accounts (RRSPs and the like but not TFSAs or RESPs) is that no tax is payable, not even US Witholding tax). These funds sport very high 12-18% cash payout yields at the moment which looks great but is a strong clue of much higher risk. That risk comes from a business model (see description in the Wall Street Journal) much different to any of the Canadian options above. The mortgage REITs rely on the return boosting effect of borrowing at very low short-term rates to buy mortgage backed securities (basically bundles of mortgages originated and sold on by other firms). Are these yields sustainable? One Seeking Alpha article thinks yes, for some. In addition to the many individual mortgage REITs, ETFdb lists US ETFs that hold mortgage backed securities.

All but one - the exception being First National - of the securities produce income that is taxed as interest despite the misleading name of dividends attached to the distributions. Therefore the best place to hold such mortgage securities is in a RRSP, TFSA, RRIF, LRIF, LIRA or other tax-favoured account.

Payout Stability and Yield
As our table below shows, the cash payouts of the MICs with a longer track record have declined along with interest rates. That's not necessarily a bad thing since they still compare favourably with other short term fixed income as we have already noted. 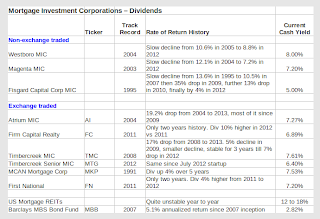 The key to the future is the skill and judgement of the mortgage management team in properly adjusting the risk of the mortgage lending to the interest rate charged while controlling costs and the risk of leverage. To assess that and other factors that can affect the success of a mortgage, it is a wise idea to use the checklist we mentioned above. As usual, the return to be expected, whether it is interest or dividends and capital gains, will be related to the riskiness of the investment.

Is now a bad time to invest in mortgages?
That's a natural question given the slowdown in sales in a number of markets and some reports of impending doom in the Canadian market akin to what happened in the USA and other countries. Of course, the companies say they are still expanding profitably within acceptable risk parameters due in part nowadays to some pullback in lending by the big banks. In our opinion it's too hard to tell if mortgages are a better or worse investment than anything else right now. The best protection lies in the due diligence to pick the solid companies who can survive in bad times as Canada's banks did through the 2008-09 financial crisis.