After we wrote our original comparison last July about Canadian ETFs that focus on dividend paying stocks, fund giant Vanguard entered the fray in December 2012. Let's see how its fund compares to the existing bunch of ETFs in this category while providing some additional perspectives and updates to the previous analysis.

Cash Distribution Yield - payouts are not necessarily stable or always growing
As in July, XEI still offers the highest cash payout yield of 4.6% (based on the trailing twelve months) but the gap with ZDV and XDV has narrowed. HAL still does worst, offering only a bit more at 3.0% than the TSX market average, seen in the broad market ETF from iShares (XIC), of about 2.5%. VDY's poor 2.2% yield we interpret as being being a temporary effect of the recent startup.

The reason we think it is temporary is an additional metric we found on Morningstar.ca where the Portfolio details page shows the projected dividend yield of the combined holdings of an ETF. VDY's is here and it shows as 4.27%. The number is not a forecast since MER, trading costs, index changes, imperfect tracking or dividend changes will cause actuals to fall short but it is a suggestive indicator. ZDY comes out ahead on the forward-looking dividend yield. DXM and PDC's numbers suggest continued more modest payouts though still ahead of our market benchmark XIC's projected 3.04%.

Surprisingly, some of these ETFs hold a good proportion of stocks that have cut their dividends. About 20% of the stocks in both XEI and VDY have lower dividends today than five years ago, which we discovered when we entered the stock symbols for all these ETFs in the free GlobeInvestor My WatchList and displayed the Dividend view. To be sure we didn't exclude stocks that had cuts during the credit crisis but have since got back on track, we did not count those which have increased dividends in the past year even though they had a negative five-year record. The selection method itself for XEI and VDY - based mainly on high dividend yield - may expose them to more volatile dividends and payouts. Whether the offsetting diversification benefit of the ETFs' many holdings is enough to overcome this factor, only time will tell but it cannot be helpful. Funds like CDZ and PDC both are built on selecting only stocks with rising dividends, which eliminates the problem.

Even that is not the end of the story, however. CDZ has a longer track record back to 2006 and we can see in the graph below that CDZ's distributions fell considerably through 2010 and 2011 before going back up somewhat in 2012. The reason is its particular selection criteria which requires that its stocks have rising dividends. As Canadian Couch Potato explains in this post, after the financial crisis the big banks stopped raising their dividends and these stalwarts of CDZ were cast out causing the ETF to shrink in number of holdings and in cash distributions. Meanwhile the investor in XDV, with its looser criteria requiring only avoidance of stocks cutting dividends, fared much better. Distributions fell much less and are up strongly since 2007. 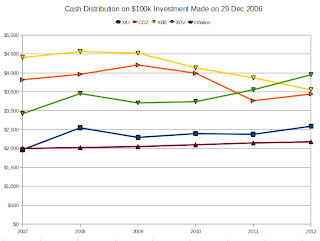 On the assumption the pattern will hold in Canada too we have calculated the weighted average payout ratios for these ETFs also using figures from the Globe WatchList view and find that ZDV and XEI sport the desirable higher payout ratios. DXM's is quite low at 31% while VDY's is next lowest at 35%.

Stock and Sector Concentration
As before XDV and PDC remain too heavily concentrated in a few stocks and in the financial services sector. Surprisingly for a fund that holds the most stocks of any of these ETFs, VDY joins them with 61% of its holdings in the top ten stocks and a 59% overall concentration on financials.

The other ETFs' sector restrictions bring them much closer into line with the overall TSX embodied again by XIC, which has only 34% in the top ten and 33% in financials. 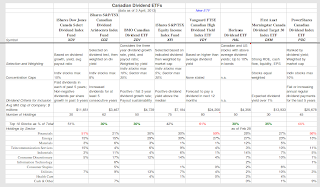 Volatility Riskiness and Performance
Only a few of the ETFs have a long enough track record to get an inkling of their market volatility and performance but they seem to tell the same story. Volatility of market price over the past three years (again obtained from Morningstar) is markedly lower at 8.3 - 8.7% than XIC's 10.7%.

Total returns (dividends plus price appreciation) over both the past three and five years are well ahead of the XIC average, respectively, of 3.2% and 0.7%. What CDZ lost in cash payouts it more than made up in capital gains with total return of 9.4% over 3 years and 6.3% over 5 years. The story of dividend ETFs is not just dividends.

Though much too short to be in any way definitive, these are encouraging signs supporting the basic idea mentioned in our first post of dividend stocks as providing superior stability and better returns.

Bottom line
We still think that ZDV wins our vote with its much lower MER, high payout ratio and good diversification through low concentration across companies and sectors. HAL is still worst with its high MER, low dividend payout and un-dividend investing strategy. CDZ is well diversified but its MER is quite high and its yield is still not far above the TSX. XEI pays the highest yield and it is reasonably well diversified but it has a fairly high MER and includes a high proportion of dividend-cutting companies. DXM is well diversified but its MER is on the high end and the payout ratio of its holdings is quite low. With their poor growth in assets we wonder whether HAL, DXM and PDC will be able to survive long. XDV and PDC are still too concentrated in the financial sector and in a few companies. Newcomer VDY has joined them in that regard and it also includes too many companies that have cut dividends, offsetting its attractively low MER.

Disclaimer: this post is my opinion only and should not be construed as investment advice. Readers should be aware that the above comparisons are not an investment recommendation. They rest on other sources, whose accuracy is not guaranteed and the article may not interpret such results correctly. Do your homework before making any decisions and consider consulting a professional advisor.
Posted by CanadianInvestor at 20:27