Investing Risk: How Badly did Inflation and Currency Hurt Past Returns?

We have been dissecting the impact of various types of risk, seeing what historically has been the worst result for the Canadian investor, starting first with the list of all the main risks, the nature of their effect and counter-measures and then last week with the historical numbers on past market crashes. This week we factor in historical inflation and currency shifts to see what were the net combined worst effects.

Inflation
When Canadian inflation goes up unexpectedly, that is bad for an investor. Though rates have generally been quite stable within the Bank of Canada's target 1-3% range for the last 20 years, data back to the early 1950s shows periods of big jumps and high inflation, such as the chart below from Global-Rates.com. RetailInvestor.org has another chart going back to the 1870s in his discussion of inflation risk. It show huge swings between high inflation and deflation.

Rampant, totally out-of-control inflation can have the same effect as outright default. The chart below from the Credit Suisse Global Investment Returns Yearbook 2011 shows the devastating impact of hyper-inflation on bonds amongst major European countries of France, Italy, Germany and the UK during the 20th century. 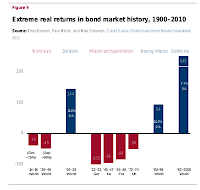 Currency Swings
It wasn't just inflation that experienced large swings in the past. An investor in US securities would also have been affected by the shifting value of of the US dollar against the Canadian dollar. Investments in non-US foreign securities, which have become ever more popular and accessible through funds and ETFs in the last quarter century, would also have been strongly affected by the movement of the Canadian dollar against many foreign currencies.

The Oanda website, from which the chart below is copied, shows Historical Exchange rates for major foreign currencies going back to the early 1950s. Retail Investor.org has a chart on this page for the US vs Canadian dollar back to 1925. These charts show major shifts and upward /downward movements lasting decades, which might, at first glance, be thought to depress returns for the Canadian investor caught on the wrong side of the long term trends.

In a summary of the renowned book Triumph of the Optimists by the same authors as the Credit Suisse Yearbook, the CXO Advisory blog notes that once exchange rates and local country inflation are netted out the real equity return is what counted most and "local exchange rate fluctuations have not presented a significant disincentive to diversifying internationally in equities over the long term".

Including both Inflation and Currency, what were the worst returns for a Canadian investor?
The best available free online resource for seeing the combined effect of inflation and currency for the Canadian investor appears to be Stingy Investor's Asset Mixer. By filling in 100% allocations to each asset class in turn, it is possible to see how each fared over the maximum period of available data. Results are in real-after inflation Canadian dollars and assume no fund fees, which we will look at separately in a future post.

Canadian T-Bills
This is quite a contrast with the finding in our previous post that T-Bills, in nominal terms, had never had a down year. Inflation can be a harsh risk. It undercuts T-Bills' oft-cited safety. T-Bills may be safe but they are still risky!

Developed World Stocks EAFE 1970 to 2010
Emerging Market Stocks 1988 to 2010
Currency has accentuated the downward extremes of foreign stocks for the Canadian investor. The good news is that it exaggerated the upside too. We previously showed how this has worked within a portfolio combining multiple asset classes in Historical Effect of Currency and Inflation.

Bottom Line: Currency and inflation contribute to return downside over periods of up to a decade. The investor must be able to exercise patience.

Disclaimer: this post is my opinion only and should not be construed as investment advice. Readers should be aware that the above comparisons are not an investment recommendation. They rest on other sources, whose accuracy is not guaranteed and the article may not interpret such results correctly. Do your homework before making any decisions and consider consulting a professional advisor.
Posted by CanadianInvestor at 14:16

Of course, too high inflation messes up more than one would think. I would cause decrease of the value of money which leads to the decrease of consumption, higher interest rates , currency depreciation,... Contraty to popular opinion, the inflation does not necessarily mean stormy weather for the economy. For instance, in case of the largest emerging market in the world, China, many economists suggest the annual inflation of 2 % is too low for a developing country and that a higher increase of the price level in China would bring more positive than negative effects on chinese economy. Anyway it seems like the inflation is knocking on the door in Canada so if you are not doing business in China and could use some handy information for investors this article might be the one you are looking for: http://calgaryrealestate.ca/calgary-real-estate/2011/07/analysis-canadian-inflation/.

Bobby6, I'd be surprised to learn that higher inflation is good for developing economies. Always thought money supply should keep pace with economic growth, though it might be harder to match it up in a dynamic growing economy, as opposed to the sluggish low growth developed economies. But am always willing to read serious discussion on the subject. Any links to suggest?

In Canada the main reason any inflation, such as the 1--3% range of the Bank of Canada now, is government policy is that o% is feared to too easily become deflation, which is thought to trigger contraction in the economy.

Nice summary in the link you inserted in your comment.