What is a Viable Mix for Retirement Savings Success?

Are you on track for building a financially sustainable retirement? How can you know if you are making progress whether you are 35 or 55?

Saving and investing enough depends on several factors that inter-twine and affect one another:
- what age you stop working and retire,
- how many years you save,
- your savings rate,
- your desired retirement spending,
- how long you will live,
- the returns from the portfolio where your savings are invested.
In addition, there is the make-up of the portfolio between stocks, bonds and other asset classes to decide.

It is easy to see that deciding on a viable mix can seem dauntingly complex. Obviously, the longer you work and save, delaying retirement, the lower the required savings rate needs to be. The more stocks in the portfolio as opposed to bonds, the higher the return should be, but there is more chance of stocks doing one of their familiar nose-dives at the wrong time, just at the start of retirement. The question everyone faces: what are the numbers to use?

The Past as a Guide
One way to get a good idea, if not a definitive answer, since we can never be sure the future will be exactly the same, is to look at what happened and what worked in the past. Using a long enough period that includes recessions, inflationary periods, depressions, booms, wars, financial crises, bubbles and crashes, we can gain some confidence that the numbers might be worth considering.

Enter researcher professor Wade Pfau of the National Graduate Institute for Policy Studies in Tokyo, Japan, who has done some interesting number-crunching in his paper Getting on Track for a Sustainable Retirement: A Reality Check on Saving and Work. He has figured out what various combinations of retirement age, income replacement level and asset allocation would have ensured that a person would never have run out of money up to age 100 (few of us get to live as long as Jack Rabbit Johannsen) assuming that the person had already saved a certain amount to date. In other words, he has looked at the worst case scenario for anyone retiring anytime during most of the 20th century (though he cannot go beyond anyone who would be less than 100 in 2010 e.g. a 55 year old retiree of 1965, who would have 45 years of retirement by 2010, or a 65 year old retiree of 1975, who would have 35 years).

Taking one example from these tables, we see that a 35 year old with zero retirement savings today could still retire at 66 (blue-circled cell in the table below) at the 50% spending rate by saving 15% per year. 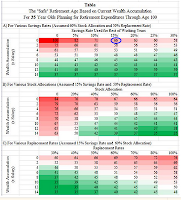 Stock Allocation Sweet Spot 40 to 60%
One fascinating fact coming out of the middle panel of all the tables, whatever the age at which the look forward starts, is that an optimal allocation percentage to stocks looks to lie between 40% and 60%. A higher allocation to stocks lowers possible retirement age little if at all. Below 40%, the safety of fixed income comes with a significantly increasing higher retirement age, due no doubt to the much lower returns historically achieved by fixed income.

Caveats and Cautions
We believe that though very useful, the tables should be used to ballpark and to judge rough trade-offs, not to set precise expectations.
The test that the portfolio should never have run out of money is very stringent. The high required savings rates are necessary in a minority of all the years considered, as Pfau's figure 4 shows. Taking a chance that the retirement years will be blessed with reasonable investment returns may suffice. Which part of the past will the future be like? No one knows. Pfau lays out an ultra-cautious approach. It may not even suffice if the future brings something worse than any period yet recorded. We sincerely hope, and expect, not.

Disclaimer: this post is my opinion only and should not be construed as investment advice. Readers should be aware that the above comparisons are not an investment recommendation. They rest on other sources, whose accuracy is not guaranteed and the article may not interpret such results correctly. Do your homework before making any decisions and consider consulting a professional advisor.
Posted by CanadianInvestor at 12:05

Thank you for the excellent description. I'm the author of the article, and I've added a link to this post on my own blog, because I could not have summarized the article better myself. Also, I agree with your extra interpretations.

Thanks Wade .... now if you could run some Canadian data that would be highly interesting!

I was to give you some more info, but now I'm confused: are you the same "CanadianInvestor" I talked to before who commented on my link I provided below, or are there two of you out there?

In this blog post I did include the historical path of withdrawal rates for Canadians:

I don't have the specific numbers for Canada readily available for "Getting on Track" now, but I will try to look at it sometime. It does seem though that the US and Canada have had somewhat similar experiences regarding these retirement planning issues, which is to say Canada and the US have both provided much better conditions for retirees than most other developed countries. I can't imagine that the numbers for "Getting on Track" will be too different for Canada's case.

Hi Wade, yes the CanadianInvestor of the various comments is the same person, me! The key question seems to be whether the future be like the past. On what basis do we assume it will or won't?