Foreign Investments: What does history tell us about hedging currency?

Returns are boosted from investments in countries whose currency appreciates or reduced when the foreign currency depreciates (About.com walks through an example of how this works here). Should a Canadian investor looking at buying foreign equities or bonds therefore try to avoid the risk of shifts in the value of foreign currencies, for example by buying mutual funds or ETFs that hedge currency? It is an important topic since foreign diversification is on most people's agenda and we've previously posted on this subject several times: how a falling Canadian dollar softened the downward blow in 2008 and whether to hedge or not to hedge in relation to equities.

The recent publication of the Credit Suisse Global Investment Returns Yearbook 2012 adds new information with analysis on many countries worldwide in addition to the USA and Canada over a very long time period going back to 1900 and including bonds as well as equities. Here is what the Yearbook researchers found.

Currency exposure from foreign equity is a valuable benefit not a disadvantage for long term investors
Hedging benefits equity investments in the short term by dampening currency fluctuations but the effects fall off quickly with years invested and by as little as eight years holding period the effect of currency exposure as a protection against domestic inflation becomes a big benefit. As the researchers conclude, "Hedging thus exposes investors to rapid, unexpected inflation in their home country". That's because over the long haul, currencies reflect relative inflation rates. If Canada's inflation rises faster than in other countries the Canadian dollar will fall and that will boost foreign equity returns. That's a valuable benefit for long-term investors who are concerned about the purchasing power of their investments.

In the case of Canada in particular, the graph below from the Yearbook shows the Canadian investor in equities (pointed to by the red arrow on the left which we added to the original) would have had the lowest risk reduction of all from hedging - none at all in the period 1972 -2011. 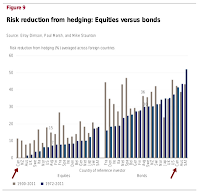 Bonds
The Yearbook tells us that:
Canadian Investors in foreign bonds experienced among the greatest risk reduction from hedging, as shown in the above chart by the red arrow on the right.

Hedging benefits fall quickly with investing time horizon
"Typically, the benefits fall the longer the horizon, and rapidly turn negative. Rather than lowering risk, hedging by longer term investors raises risk." As the Yearbook shows in figure 10, copied below, that can happen with a horizon as short as eight years for both bonds and equities. 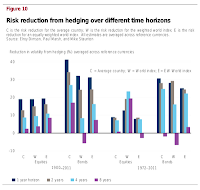 Foreign equities and bonds performed best after currency weakness
A period of currency weakness in a country is more often than not followed by better returns for the foreign investor who held that country's equities or bonds.

That finding might suggest especially good moments to buy in. Does that mean, looking at the US dollar's weakness against every major currency, including the Canadian dollar, over the last three years in the Rates FX chart reproduced below, that now is the time to buy in to US investments?

It is tempting to see opportunity in the USA, especially since the US economy and stock markets seem at last to be on the rebound. However, the Yearbook warns us that anticipating future currency shifts is more or less impossible, let alone how the US market might perform. Averages do not equal certainty and do not guarantee a favorable outcome.

Implications for Canadian Investors:
1) Hedging foreign equities doesn't or shouldn't make much sense for two reasons. First, currency hedging only protects in the short term and in the long term, hedging raises risk from inflation - i.e. not hedging provides the additional benefit of protection against high domestic inflation. Second, anyone with a short term investing horizon should probably not be investing in equities at all, whether foreign or domestic. Money that will be needed in the next year or two should be invested in something much more stable than inherently volatile equities.

2) Hedging foreign bonds can make sense if the holdings are short duration bonds. The greater currency volatility effect on bonds makes hedging more valuable and the long term hedging disadvantage is not brought into play.

3) Wide diversification to many countries (i.e. not just the USA) and a longer time horizon together more or less eliminate the value of hedging foreign investments. Putting all foreign holdings in one country, like the USA, is not advisable from a currency risk viewpoint.

Disclaimer: this post is my opinion only and should not be construed as investment advice. Readers should be aware that the above comparisons are not an investment recommendation. They rest on other sources, whose accuracy is not guaranteed and the article may not interpret such results correctly. Do your homework before making any decisions and consider consulting a professional advisor.
Posted by CanadianInvestor at 11:17