How to Calculate Capital Gains and Other Income Taxes on ETFs

With a month to go before the April 30th income tax filing deadline and with T3 and T5 slips due any day from brokers (see our recent tax calendar post with all the key tax dates for investors), the investor needs to be ready with the correct method for filling out tax forms, especially the tricky bit of calculating capital gains on ETFs.

Example Situation - To demonstrate the ins and outs and variations possible that can be applied generally to all ETFs, we use the example of an ETF that holds US Large Cap Equities but is traded on the TSX in Canada:

Investor buys 1000 shares of XSP on August 2nd, 2011 and then sells them on January 3rd, 2012 in a taxable non-registered account. What happens and what needs to be done on tax returns?

Entering T3 or T5 Boxes on Your Tax Return - First, there are no tax returns to worry about for XSP held within a tax-sheltered account such as a RRSP, RESP, TFSA, LIF, LIRA etc. There are indirect tax consequences explained further on in this post but we start with XSP held in a taxable account.

T3/5 entry is the easy step and it covers all of what you need to do to complete your 2011 tax return. If there is information to report because you hold this or any other ETF in a taxable account, your broker (and not the ETF provider) will send you T3 or T5 slips. Doing your 2011 return is as easy as transferring the amounts from each box into the return where the form or tax software asks for each one. Box 34 contains foreign taxes paid to the USA; you get a tax credit for that amount, which will reduce Canadian taxes owing.

The only box that doesn't get entered on the 2011 return is box 42 Return of Capital, which you only use to calculate an updated Adjusted Cost Base (ACB). The screen image below shows how a T3 as it applies to XSB would appear for you the investor in the 2011 tax year.

Capital Gains Reporting - There are two sources of capital gains within an ETF that an investor might need to report.

1) Gains internal to the ETF: As a result of trading by the ETF managers, for example to rebalance or replace holdings following index changes or sometimes from unintended profits of currency hedging activities (e.g. XSP in 2010), the ETF might end up the year with net capital gains. There could also be net losses for the year but as a trust, under Canadian tax rules, an ETF cannot distribute capital losses to investors, it can only accumulate and carry them forward to offset future gains. Those gains the ETF distributes or attributes to investors for tax purposes and they show up in box 21 on the T3. The investor receives no cash, in fact ETFs reinvest the capital gains. Note that box 21 Capital Gains is blank for XSP in 2011. In past years there have been very large capital gains by XSP for the investor to report, notably in 2007 and 2010, as the Distributions tab for XSP on the iShares website copied in the screen image copy shows. 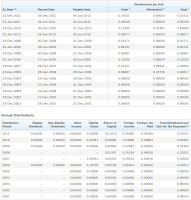 2) Gains the investor creates by buying and selling shares: This is the more obvious and intuitive source of capital gain. But it trickier to calculate correctly for income tax reporting. Applying to XSP the general method we explained in ETFs and Mutual Funds - Calculating Capital Gains, the table below shows the amounts to report spread over 2011 and 2012 tax returns. The formula is:

In both years box 21 is blank but for the 2012 return, the year XSP is sold, the investor must report a capital gain on Schedule 3. The red highlighted lines show the two sources of capital gains.

No capital gains double counting occurs - Some might think that capital gains tax is being levied twice, once through the annual box 21 and secondly through the gain on sale. That is not the case. The reason is that you are able to offset the capital gains that are reinvested within the fund (the type that gets into box 21 on which you pay tax annually) by adding the reinvestment amount to your ACB.

Adjust ACB for every year - If you have owned an ETF for several years and then sell it, be sure to include the ACB adjustments for all the years, not just the most current year.

Other tax categories of income happen unevenly at any time of year - Return of capital, however, may occur throughout the year. In 2011, XSP paid out 0.00419 ROC per share in June and 0.00649 in December. Our source is iShares' 2011 Tax Distribution Characteristics, which breaks down each type of income by payment. That is why our XSP example T3 only reports 1000 x 0.00649 = $6.49. It was only bought in August and missed the June ROC. Similarly, foreign income (box 25) and foreign tax paid (box 34) for XSP is split unevenly between the June and the December distributions, so our T3 reflects that fact. Other ETF providers, unlike iShares, do not publish the tax breakdown within each year. You as an investor need not worry about it since the broker is responsible for preparing and sending out a T3/5 with the correct data.

Cash distribution amounts don't matter for tax calculations - The actual cash distribution for XSP of $143.11 received during the time XSP was owned will not show up on a T3/T5 slip. Cash is irrelevant for taxes. The total of cash plus reinvested distributions in the upper part of the XSP distribution table must equal the sum of the tax breakdown in the lower part of the table (i.e $0.23557 per share in 2011 for XSP) but there is no necessary one to one correspondence between amounts like cash and any particular tax category. Ignore cash and use the T3/5 slips.

Foreign tax paid by XSP is not claimable in registered accounts - There are different tax consequences for XSP within registered accounts - RRSP, RESP, TFSA, LIF, LIRA etc. There is no T3 issued in such registered accounts for any holdings, whether consisting of XSP or any other ETF. There is no way to obtain a tax credit for the foreign tax amount that would appear in box 34. It has been deducted in the USA before reaching iShares. The effect is a permanent real reduction compared to the under-lying S&P 500 Index to XSP's return for the investor that repeats every year XSP is owned.

In our next post, we will compare XSP with four other ETFs in the same US large cap equity category and see how they have significantly different tax profiles, enough perhaps to sway the choice of which is best for particular investor circumstances.

I have some covered call ETFs that distribute largely capital gains (HEE and HEX). If distributions were DRIPed in 2011, am I right in thinking there is no capital gain to claim ... just and ACB adjustment - I didn't get a T3 from Questrade for these. Its my first year investing outside of mutual funds .. quite a lot to track !

Hi Rob,
From reading the Horizons website about HEE and HEX it does appear that taxable income and T3/T5 slips will be issued. If you hold the ETFs in a tax-sheltered account like a TFSA, RRSP, RRIF, RESP etc there is not tax to report and the T slips won't be issued. It might also be that no T slip will be issued for such holdings in a taxable account if the amount is less than a certain small amount, which commonly seems to be $50.

The relevant part of the HEE annual report reads "If you hold this ETF outside of a registered plan, income
and capital gains distributions that are paid to you increase your income for tax purposes whether paid to you in cash or reinvested in additional units. The amount of the reinvested taxable distributions is added to the adjusted cost base of the units that you own. This would decrease your capital gain or increase your capital loss when you later redeem from the ETF, thereby ensuring that you are not taxed on this amount again."