Canadian Dividend ETFs: Which is the Best?

ETFs made up of dividend paying Canadian stocks have gained popularity and the offerings have proliferated. The first one was created in 2005, then another in 2006 and then five more in the last two years. Though they all have the same basic idea of holding dividend stocks, it is no surprise that beneath the surface there are marked differences. So this week we look at them to winnow out the good from the not-so-good.

Distribution yield, aka cash payout
Cutting to the central issue of dividends we see a huge range of payout rates by the funds. Note that the dividend yields of the stocks within doesn't matter, it's what left over after management fees and other costs, the distribution yield (obtained from TMX Money), that counts. XEI wins hand down at the moment with an annualized yield of 4.7%. Others that are quite good with yields above 4% are ZDV, XDV and PDC. Progressively less impressive are DXM and CDZ, whose yields are getting down to not much more than the 3.1% of the standard ETF that represents the overall market of large cap stocks, the iShares TSX 60 (XIU). If the ETF can't do much better than the market, why bother? Pulling up the rear with a below-market 2.6% is HAL, a result that denies the name dividend ETF.

Diversification and concentration riskiness
Spread it out is the basic principle for risk reduction. That means more companies across multiple sectors, with no one company / small number of companies, or industry sector, too dominant. This is where the stock selection and weighting methodology seems to have backed some of the ETFs into a corner, though some of them have built in caps on individual stock and sectors as our table details.

CDZ, XEI, ZDV and DXM seem to do the best overall job of spreading things out. XDV and PDC have too many of their eggs in the Financial Services basket and in a handful of companies i.e. the big banks, though some might think that reassuring and if so, it is easy enough to simply buy stocks of the big five bypassing an ETF. HAL is a strange fish with respect to holdings. Not only does it own some US stocks (10% at the latest report) that do not have the Canadian dividend tax advantage, its prospectus allows it to own fixed income, which are not exactly dividends.

Contrary to the image of dividend payers as being large stable companies, most of our ETFs have a small cap bias. The TSX Composite average market cap is about $14,800 million but CDZ's portfolio only averages a quarter of that and ZDV is just over a third that size. At the other end of the scale, HAL and PDC are portfolios of mega cap companies. Does that make the small cap ETFs riskier in the sense of volatility? 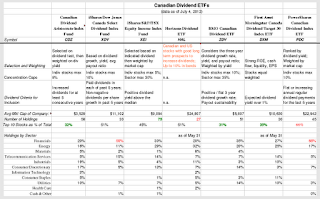 Volatility riskiness
How bumpy is the ride along the way for these ETFs compared to the overall TSX and how has their performance compared? We note again that most have been in existence too short a time to draw any firm conclusions but it is nevertheless interesting to see what has been happening. In this Google chart, we see that since the beginning of 2012, the six ETFs we have chosen (excluding DXM, which was only launched in February) seem to have tracked, per the various coloured lines, above the TSX in the black line. Only XEI has done worse than the TSX.

In another Google chart view of the period through the financial crisis of 2008, we see that the two ETFs (XDV and CDZ) that have existed that long both bumped up and down no worse than the overall TSX. CDZ in particular is well ahead on price - down only 2.4% vs the TSX minus 14.3% in the past five years. When we consider also that the Google chart is price only and does not include dividends, which would have been higher for the dividend ETFs, then the dividend ETFs look even better.

Costs - Management Expense Ratio (MER)
Costs reduce net returns to the investor. Principally made up of management expense but also including ancillary trading and administrative costs, the lower the MER is, the better. On this dimension, ZDV is the clear leader with an MER of only 0.35%. The others are appreciably higher in the range 0.5-0.7% with HAL again pulling up far worse - at 0.99%.

Tax Efficiency
Four of the ETFs made it into our list of Tax Champion ETFs of 2011. ZDV made it into the Gold medal category, though this may not be indicative of future years due to short track record. Longer lived funds XDV and CDZ both made it into the Bronze medal category, as did newcomer XEI. Justin Bender of PWL Capital's post comparing XDV, CDZ and XEI came to the conclusion that XDV would likely have the lowest portfolio turnover and thus less future capital gains for investors to report. His post also gives another perspective on risks of these funds.

Bottom line
Which is best? It is easy to say which which is worst - HAL with its high MER, low dividend payout, un-dividend investing strategy, small number of holdings. XDV and PDC are uncomfortably concentrated in the financial sector and in a few companies. Others have good and bad points - CDZ is well diversified but its MER is quite high and its yield is barely above the TSX. XEI pays the highest yield by quite a bit and it is reasonably well diversified but it has a fairly high MER. DXM spreads holdings really well across companies and sectors but its MER is also on the high end (and it will be higher than the 0.60% management fee in a year once trading and admin costs get added in) while its yield is not outstanding. ZDV wins our vote by a hair with its significantly lower MER, high payout ratio and good diversification through low concentration across companies and sectors. Its only drawback is its relative youth and resulting short track record. Some might be put off by its portfolio not holding any of some of the major banks (there's no Scotiabank or TD Bank at all) and its relative bent towards smaller cap stocks. But we like it. And, of course, investors reading this can and should make up their own mind.

Disclaimer: this post is my opinion only and should not be construed as investment advice. Readers should be aware that the above comparisons are not an investment recommendation. They rest on other sources, whose accuracy is not guaranteed and the article may not interpret such results correctly. Do your homework before making any decisions and consider consulting a professional advisor.
Posted by CanadianInvestor at 13:59

Hi Bean C, thanks for dropping in. I must note to other readers that your blog has varied, insightful and useful tax and personal finance content too and is worth a visit - see http://www.thebluntbeancounter.com/

I totally agree with your opinion. The companies usually promote the hard cash dividend recipients to reinvest them in the firm. The reinvestment of dividends is not one and only benefit of the institution but besides the shareholders themselves. So this is good way to get benefits.

I've just been learning about these top etfs. Thanks for explaining this, it definitely helped clear things up.