The Crucial Difference between Price and Income Stability of Equities

Stock markets are volatile, there's no denying it, the latest gut-wrenching downward episode being the credit and financial crisis of 2008, which saw the TSX Composite plunge 48% between June 2008 and March 2009. Bonds, on the other hand, have been quite stable, steady performers. This classic widely-known view is well illustrated by the annual returns in the chart below of three of the most popular ETFs in Canada - the flagship equity iShares S&P/TSX 60 Index Fund (TSX: XIU), the dividend focussed equity iShares Dow Jones Canada Select Dividend Index Fund (XDV) and the broad bond iShares DEX Universe Bond Index Fund (XBB). 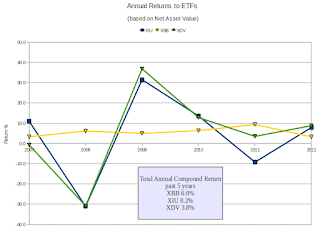 Apart from the wild ups and downs of the two equity ETFs, they have both turned in poorer total performance than XBB.

Is that it, case closed, bonds are clearly superior, especially for an investor interested in steady income, like a retiree? Let's consider a bit more history and where we might be headed in future.

Income volatility of stocks and bonds looks quite similar
Total returns and income do not follow the same pattern. Unlike the price volatility noted above, the actual hard cash paid to investors by the ETFs - the income - has not varied much year to year. That probably isn't surprising about the bond ETF XBB but look at the chart below, which we compiled from the data in the Distributions tab for each ETF on the iShares website. The two equity ETFs are as steady in paying out cash as XBB! XDV, built as a dividend fund, has paid out more than XIU.

Bond income has trended down while equity income is on the way up
The yellow line of XBB's cash payouts has declined considerably while that of XIU and XDV have gone up. We note especially that the severe recession of 2009 - one of the worst in the past century - put hardly a dent in the equity fund payouts. The slow (XIU) or fast (XDV) upward rise in their distributions has resumed since then.

It is little surprise that XBB's payouts have steadily declined. As interest rates have fallen, lower coupon paying bonds have gradually replaced higher paying bonds in the holdings. What does the future hold? For now, and perhaps the next few years, central banks seem intent on keeping rates at the current rock bottom level to encourage economic growth. Based on XBB's average coupon rate of 3.86%, which drives the cash distribution rate pre-expenses (XBB's MER is 0.33%), the 2012 distribution payout rate of 3.6% is likely to stay about the same. If / when interest rates start to rise, then gradually existing low coupon bonds will be replaced by new higher coupon bonds and the payout yield will start to gradually rise again. At the same time of course, the rise in interest rates will cause the principal value of the existing bonds to fall and XBB may well see negative total returns.

Rising income for equity is a typical pattern
It is also no surprise that both equity funds have increased payouts over the years. This is typical for equities and has been sustained over many years in other countries. Moreover, the rise in dividends more than keeps pace with inflation over the long run. Look at this chart for the USA's S&P 500 index from the presentation Assessing the Relative Value of Stocks, Bonds,and Other Asset Classes by Wharton School professor and author Jeremy J. Siegel. 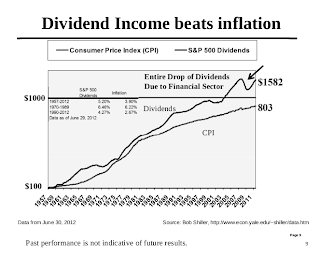 The same pattern - equity income rising and at a faster rate than inflation - can be seen in Canada. To illustrate, we pretended to invest $100,000 in each of our example ETFs at the end of December 2006. If we simply bought and held the original share units, not reinvesting any distributions, the chart below shows the actual cash amount we would have received. The cash from XIU and XDV goes up nicely over the five years and at a faster clip than inflation (using Total CPI figures from the Bank of Canada). (Though distributions do not strictly equate to dividends - some years there are other types of income, the annual tax type breakdown on the iShares website shows the exact composition - XDV and XIU distribute as cash mostly dividends received from the companies in their holdings.) 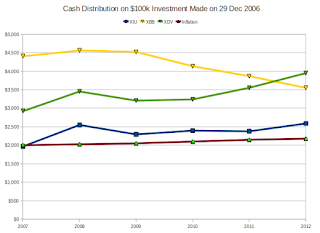 Notice how XDV's distributions now exceed those of XBB by 2012 after starting from a much lower base. That's impressive and enticing!

Equity income is attractive in a non-registered taxable account
The lower tax rates (see Ernst & Young tax calculator for rates by province) on dividends (or occasional capital gains) in XDV and XIU versus interest income in XBB can make a big difference to net after-tax cash. Due to the preponderance of dividend income, XDV was a bronze medalist in our evaluation last year of the 2011 ETF tax champions.

Potential to use equity as part of a retirement income strategy
The idea of using dividend paying equities as an integrated part of a plan to continually generate income during retirement is expanded in Thornburg Investment Management's Investing in Retirement Using a Global Dividend Income Strategy. US and international equities, which exhibit the same long term rising dividends, are combined with shorter term fixed income and cash to produce dependable and increasing income. The example they present using data from the supposedly "lost decade" of the years from 2000 to 2011 makes for thought-provoking reading. Thornburg's balanced approach addresses the obvious danger of an equity-only portfolio: being subject to wild short-term volatility of the equity principal, unexpected spending needs above the regular income stream could require cashing in shares at the worst possible time during a market plunge. Such forced sales can permanently damage the portfolio.

Regular equity income can diminish panic selling urges
When we see that cash distributions from equity are, in fact, quite stable, we can be reassured and be less prone to selling out at market lows. Having cash around for near-term spending, as Thornburg suggests, also reduces these self-destructive urges.

Bottom line
Dividends have always been a steady and important part of total returns, as we discussed here. Now that we see how stable this income from equity is, equity ETFs look quite attractive for their long term income-generating potential.

N.B. XDV is not the only choice amongst Canadian equity dividend ETFs. We reviewed XDV and its Canadian dividend rivals in this post.