Return of Capital - Examples of Good and Bad among ETFs

Return of Capital (ROC) can be a thorny problem for investors seeking the highest after-tax income in a taxable account, though it can be a serious negative in tax-sheltered accounts too if it means the ETF is simply giving you your money back (that's bad ROC). Some ETFs deliberately distribute ROC-type cash, which in some cases is good and other cases is bad. For a taxable investor, good ROC helps because such a distribution of an ETF's return is not immediately taxable. Instead, the ROC is received tax-free, to be taxed only later as a capital gain when the investment is sold. Bad ROC for the taxable investor is a non-event - why should anyone be happy about getting their own money back?

The principles of good vs bad ROC
We had previously outlined the nature and the source of good vs bad ROC in this post. Morningstar.com also has an excellent explanation of ROC in a three part series of slides on this page. A third worthwhile rundown is offered by The Wealth Steward blogger Dan Hallett writing about mutual funds, though the same principles apply to ETFs, in T Series Funds: The Tax Efficiency Myth and Structural Risk.

Calculating after-tax efficiency and yield of ETF distributions for 2012
To find the ETFs which might attract an income investor with high payouts, amongst which we are also more likely find examples of bad ROC, we used the ETF screener at BMO InvestorLine (see our previous post ETF Screeners Compared for other options). to pick the ETFs with the highest dividend/distribution yield.

We then carried out the laborious manual work whose results are shown in the comparison table below. Mostly we used the websites of the various ETF providers who provide the raw breakdowns of distributions and their tax types (ROC, capital gains, reinvested capital gains, dividends, other income i.e. interest and foreign income) and the Net Asset Value (NAV) price history. Tax rates for these types of income came from TaxTips.ca. We used Ontario rates for a middle and a high bracket taxpayer. Though the exact amounts will vary by province, the pattern will be the same - higher brackets pay more overall and the advantage of dividends over capital gains in the middle bracket reverses for the higher bracket. 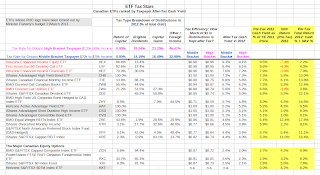 ETF distributions for 2012 - which ETFs were good and which bad?
It is perhaps little surprise that several of the most efficient and highest yielding ETFs suffer considerably from bad ROC. Horizons' funds with symbols HEX and HEF, First Asset's LXF and BMO Financial's ZWU all simply gave back investors some of their own capital. When the NAV of the ETF at the end of the year is lower than it was at the beginning, the amount of the reduction is simply giving back capital. The high cash distribution was only partly made up of real income or gains from the fund's holdings.

There were however, a number of funds that distributed very attractive after-tax cash yields at double or more that of ETFs tracking the main equity indices. Some included nothing but ROC - iShares' CHB, CSD and CVD and Horizons' HAF. That's good ROC. In fact, these ETFs have been designed to create only immediate capital gains or ROC for deferred capital gains (see our last post which examined another ETF of the same type the iShares CAB for links to how these ETFs work). Alas, these ETFs seem to have worked too well, the federal government has taken note and the March 21st budget announced the intention (see Investment Executive article) to close down the tax loophole that can transform high-taxed interest into deferred capital gains taxed at half the rate. In the case of one fund we have marked as being threatened in the table above - Horizons' HXT - the ETF provider believes that fund will escape the budget restriction since it makes no distributions. Of course, there is no law yet so we investors will need to take note when the federal government passes the relevant law and regulations to see exactly what is ultimately affected, including possibly HXT.

Another lesson from our table is that a number of ETFs with no- or low-ROC still gave off high after-tax yields, though their tax efficiency was less e.g. iShares' FIE and CDZ and BMO's ZHY.

Of course, our results are for 2012 only. An important question for the investor is whether the future will be like the past. How sustainable are the distributions of the high-yielders? We'll take a look in our next post.

Disclaimer: this post is my opinion only and should not be construed as investment advice. Readers should be aware that the above comparisons are not an investment recommendation. They rest on other sources, whose accuracy is not guaranteed and the article may not interpret such results correctly. Do your homework before making any decisions and consider consulting a professional advisor.
Posted by CanadianInvestor at 13:32