A few weeks back, we introduced the various alternatives for investors to obtain steady dependable income from mortgages. Today let's go a little deeper and compare the seven mortgage-focused companies available through online brokers and traded on the TSX. In particular, we want to see what the chances are that these companies will be able to maintain their current attractive distribution yield rates of 6 to 7%. Many of these companies state outright that they aim to provide a return of 4 to 4.5% over the federal Treasury Bill rate while safely preserving capital. We'll use the excellent guidelines PIC-A-MIC from Fisgard as our checklist of factors to consider.

Tax treatment matters and it differs a lot
A MIC's tax-exemption only means the income is passed along to the investor to be taxed in his/her hands, which in turn could be in a tax-exempt TFSA or a tax-deferred RRSP, LIF, LRIF, LIRA or a tax-advantaged RESP. Since the five MICs in our list all distribute interest income which is subject to the highest tax rate, these stocks should preferably go into a TFSA, RRSP (or the like) or a RESP, or simply in a taxable account.

The other two funds, FN and FNM.UN, are taxable. FN distributes primarily eligible dividends and sporadic small capital gains so it can go well in an investor's taxable account. FNM.UN uses a forward agreement to transform interest income into primarily return of capital distributions. Unfortunately, as mentioned in our previous post, the recent federal budget said it would prevent these arrangements but the company believes the existing FNM.UN will be able to continue till the forward agreement expires in December 2017. Since return of capital is effectively deferred capital gains, investors can continue to benefit for up to almost five years of tax advantaged income. As such, FNM.UN fits nicely into a taxable account.

Trading below or above Net Asset Value (NAV)
Perhaps the uncertainty about FNM.UN explains the fact it is trading at 1.8% below the net asset value of its holdings. In contrast, TMC is trading a fairly significant 7% over NAV and MTG is at 1.6% above NAV. Some investors may be chasing the yield without noticing what each fund is really worth.

Cash yield is often supplemented at year end
The MICs all must distribute all their income to retain their tax-exempt status so they typically set a conservative monthly amount to distribute. Then at year end there is an extra top-up amount to parcel out the remainder, which means the indicated cash yield in our table most probably under-estimates what the investor will eventually get by year end.

Distributions have trended in different directions
Disappointing - TMC and AI have seen their distributions fall appreciably over the past several years.
Pleasing - MKP, FN  and FC have been increasing their regular monthly distributions.
The other two don't have a long enough track record to detect any trend.

Dividend reinvestment plans at discounted price
Five funds offer the opportunity to reinvest distributions at no brokerage cost and at a 2% - MKP, FC and AI - or a 5% discount - TMC and MTG - to current market price of the shares.

Risks - Things that could go wrong
Look at any prospectus for these companies on Sedar and there is a long list of factors that can knock down the distributions and the capital value of the shares:
It is impossible to precisely assess the exposure, probability and potential impact of any or all these factors. The PIC-A-MIC list and our table below gives an idea of the current state of affairs for the most likely and most influential factors. 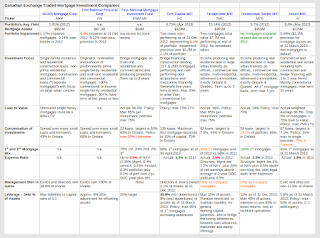 Mortgage portfolio holdings average yield mostly above payout rates
FC, TMC, MTG and AI all sport portfolios whose yields exceed the rate they pay out, which leaves a better chance that after costs are deducted there will be enough to sustain payouts.

In MKP's case, the portfolio yield at end of 2012 was only 5.81%, a lot less than the 7.74% paid out to shareowners. The difference can only come from leverage. But in MKP's case that doesn't necessarily mean huge extra risk. As a deposit taking financial institution, it can, unlike the others in our list, get cheap funding by issuing plenty of low interest term deposits just like the mainstream banks to lend out for higher rate mortgages. The interest rate spread of many such transactions can create a big sum for the many fewer shareholders of MKP shares. The fact that it has been in existence since 1991 and is regulated by the OSFI adds to the comfort that it knows what it is doing and can sustain the business model and the distribution.

Mortgage assets and concentration of loans
A bigger asset base gives more scope for spreading things out and being less exposed to any one borrower or geographic area. Another row in the comparison table shows how concentrated are the portfolios of the various companies. FN and MKP come out looking safest on this dimension.

Investment focus, term duration, loan-to-value ratio and 1st vs 2nd proportions exhibit trade-offs of one factor vs another
What they may lack in strength from concentration or smaller size, the other companies make up for with more protection in the form of shorter lending term, lower loan-to-property value and greater proportions of higher ranking first mortgages.

Portfolio impairment and loan losses across the board look to be acceptably low
The proof of lending quality, or deficiencies therein, ultimately comes out as repossessions, foreclosures and losses on loans. None of the companies seems to be facing any serious losses at the moment.

Expense ratios high for two companies
TMC, at 2.6%, and FNM.UN, at 2.5%, appear to be on the too-high end of expenses compared to the others.

Management skin in the game varies from none to dominance
When there is significant share ownership by the executives and directors who run the company, outside investors get more reassurance that attention will be paid to keeping the company profitable and the cash flowing. MKP, FN and AI look especially good on manager ownership stakes. It is interesting also that the three companies with the higher expense ratios - FNM.UN, TMC and MTG - seem to have no shares owned by the managers/executives.

Amount of leverage employed varies from zero to several multiples
TMC is the one company that so far refuses to use any leverage to boost returns. Its only borrowing is strictly to facilitate timing differences in cash flows. The others run the gamut from modest 5.8% liabilities vs assets at AI to 83% at MKP. However, as noted above, the borrowing base of term deposits is very cheap and stable at MKP so it isn't clear the risk is much more, if any.

Bottom Line
It's hard to say that any company stands out as especially weak-looking overall. MKP noses ahead to grab best choice in our opinion for its combination of pluses - starting with a high base cash yield, that has grown steadily over the years, a long track record of profitability, a dividend reinvestment program, low loan losses, a very diversified loan portfolio and a significant management stake.

Disclaimer: this post is my opinion only and should not be construed as investment advice. Readers should be aware that the above comparisons are not an investment recommendation. They rest on other sources, whose accuracy is not guaranteed and the article may not interpret such results correctly. Do your homework before making any decisions and consider consulting a professional advisor.
Posted by CanadianInvestor at 11:40

Hello, Thanks for this excellent review. I was wondering if you could briefly comment on MIC offerings from TrezCapital. The seem to offer diversification in different commercial and geographic areas. I'm not sure I completely understand the difference between the Senior and Junior funds, specifically the hurdle rate of the latter. It would be nice if you could go through all the relevant points as done with the MICs above.

Get mortgage information from more than one lender. Don't just go to your personal bank. Shop around for mortgages as much as possible, not only at commercial banks, but at thrift institutions, credit unions and mortgage companies. It's the only way to make sure you've found the best price on your mortgage.
Easy Mortgage Calculator


How mortgage loan rates are determined and what causes them to move is an absolute mystery to most folks - and those who think they know are usually wrong. As a former mortgage banker
I can tell you that a lot of people in the mortgage industry can't even give you an accurate answer to that question. best mortgage rates ontario