Canadian Superstar Investors - How good is their performance?

A few years ago, the book Stock Market Superstars captured the thoughts of a dozen of Canada's biggest names in stock investing. A book review at the time noted that the 2008 financial crisis had severely knocked down all of a selection of funds managed by the Superstars. With drops of 41 to 57%, the Superstar funds fared much worse than the 33% fall of the TSX Composite. However, one bad year needs to be taken in a longer term context. How have these funds recovered and performed since then? Let's take a look. The table below shows the performance results we have compiled primarily using Morningstar Canada with supplementary data from the individual fund websites. All returns are net of fees.

One big winner
John Thiessen at the moment is the only investor who is still indubitably performing like a superstar. His Vertex Fund follows a very complex investing strategy, including considerable short positions and it seems to work. Vertex has bounced back strongly and is again handily beating benchmarks. The 2008 crisis looks like a temporary though gigantic dip in a steady upward climb. 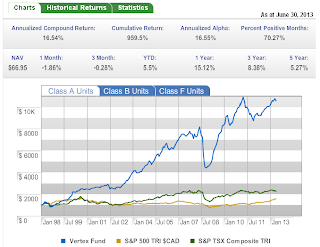 Three "OK" mixed results
Three funds have achieved above-benchmark performance over either the latest five or ten years:
Eight significantly under-performing
The rest are falling well short of benchmarks over the past five years, seemingly not able to recover from the huge decline of late 2008 to early 2009. In several cases, where figures are available, the poor past five years have eroded tremendous out-performance up to 2008 to the point of now significantly under-performing benchmarks.

Very high volatility across the board
The superstars certainly have followed their philosophy of being different from the index, with the high numbers in the standard deviation column showing by how much more that has caused fund values to swing up and down. Hitching an investing ride with the superstars will be much wilder than a benchmark index and investors will tend to win big or lose big. The volatility can easily be seen in the following Morningstar price chart of the Resolute Fund, the most volatile and worst performing of all. 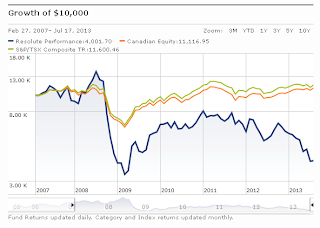 What to make of these results?
The first lesson is certainly that consistently beating an index over a long period is difficult, even for managers who have a reputation in the industry as being top guns. A second lesson might be that for many investors a simple and effective course would be to buy a broad market index fund such as the various ETFs we have reviewed in the past (e.g. in the case of Canadian equities, our reviews of large cap ETFs and low volatility vs large cap).

Disclaimer: this post is my opinion only and should not be construed as investment advice. Readers should be aware that the above comparisons are not an investment recommendation. They rest on other sources, whose accuracy is not guaranteed and the article may not interpret such results correctly. Do your homework before making any decisions and consider consulting a professional advisor.
Posted by CanadianInvestor at 15:15