Inspired by the upcoming start of the 22nd Olympic Winter Games in Sochi, we decided to look at what's inside the Canadian equity dividend ETFs that we reviewed last week to pick out the athletes (companies) who qualify for gold, silver and bronze medals. Our selection method is similar to many Olympic sports like figure skating and freestyle skiing - the judges decide, in this case the managers of the various ETFs. Who scores the most points, i.e. which stocks show up in the holdings of the most ETFs? These stocks can be good candidates for investors who want to directly build a portfolio of solid dividend payers.

The 15 Medalists are (please stand for the national anthem) ...
Gold
It's not who you might think, like the Royal Bank, Canada's largest company by market capitalization, or any of the other banks, though there are a bunch in the medals. The one and only gold medal, since it is the only stock that appears in every single dividend ETF, goes to IGM Financial Inc. (TSX symbol: IGM) manager and distributor of financial products, mainly mutual funds under banners such as Investors Group, Mackenzie and AGF.

Silver
There are nine stocks in this group (it must be other countries who won the gold) as all but one of the ETFs, or seven out of eight, hold them:
Bronze
The competition is fierce and there are only five stocks that appear in six out of eight of the ETFs:
Our comparison table below shows which stocks appear in which ETFs. It confirms that most of the ETFs are quite alike for a good chunk of their holdings, the exception being iShares S&P/TSX Canadian Dividend Aristocrats Index Fund (CDZ) whose selection criteria based strictly on increasing dividend payers has excluded most of the big banks since the 2008 financial crisis.

To get an idea of what might make these stocks so attractive, we created a watchlist in Globe Investor's old WatchList tool, entered the stock symbols and manipulated the columns with the result in the screenshot below. All the stocks have healthy five-year returns and a higher than average (the TSX Composite is about 2.7% at the moment) dividend yields that look quite sustainable given payout ratios. Only two stocks - COS and GWO - are very volatile compared to the market, i.e. sport a beta much over the market average of 1.0. 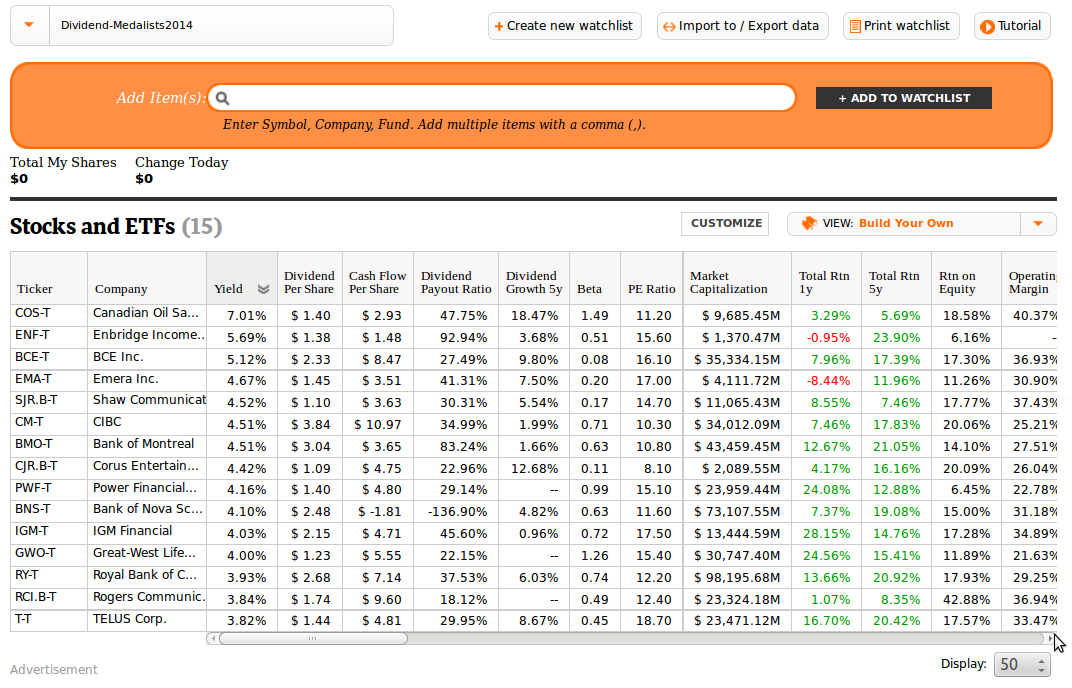 We note in passing that we investors should always be aware that data errors can creep into any source - Bank of Nova Scotia does not have negative cash flow!! If some number looks odd, it is well worth digging into. We also found a bunch of companies that had actually increased their dividends over the past five years, unlike what the Globe WatchList says. In this and the honourable mention list below, this includes ticker symbols RCI.B, CPG, MIC, MTL and RUS. Raw basic data generally is ok, it is derived values like ratios and growth rates where things get messed up. Globe and other resources like online brokers rely on outside data gathering companies who have a difficult job to compile the huge amounts of data investors want so errors do occur regularly.

Close but no medal
There is also a group of strong competitors, the chasing pack one might say, who appear in at least half the ETFs. The list of twenty-five stocks looks as follows:

We finally see stocks in sectors not represented at all amongst the medal winners, such as real estate, materials and industrials.The ETF CDZ widens its difference with the other ETFs, with even less of its holdings over-lapping.

The data for these stocks looks generally positive too, though returns haven't been as uniformly good, there are more volatile stocks and some have very high Price to Earnings ratios. 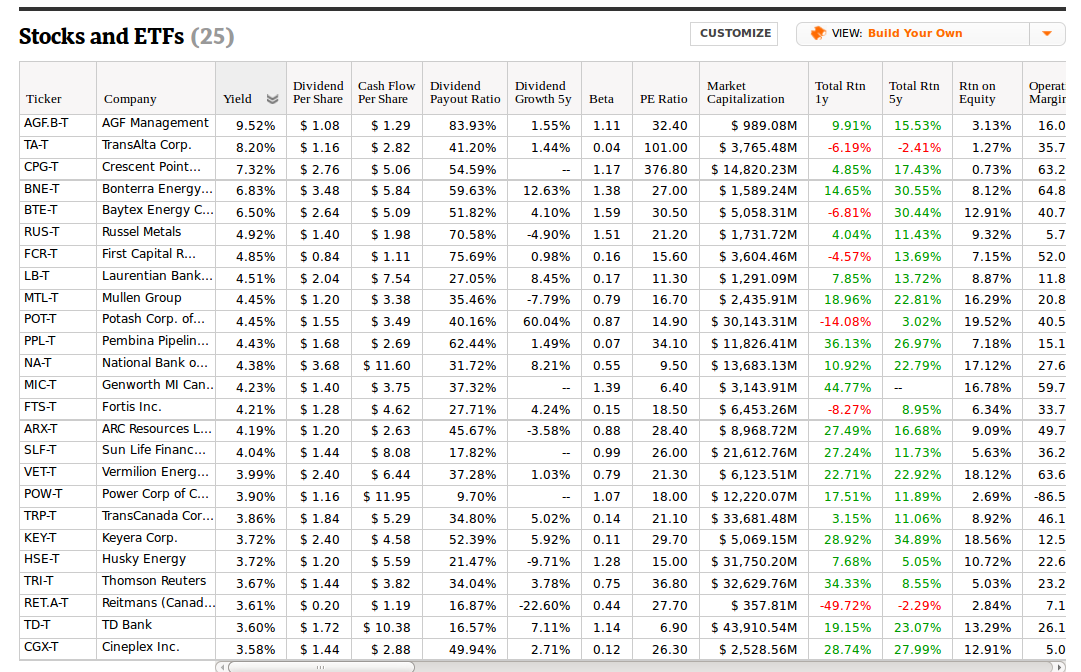 Bottom line:
The above stocks are a pretty good starting list for assembling a dividend portfolio. But it's good to keep in mind what can happen in the Olympics, especially when judges are involved - the winner isn't necessarily the best, only the one they liked the best. There may be one-performance wonders too. Be your own judge, as we are sure everyone likes to do anyway when watching the excitement of Olympic competition.

Disclaimer: This post is my opinion only and should not be construed as investment advice. Readers should be aware that the above comparisons are not an investment recommendation. They rest on other sources, whose accuracy is not guaranteed and the article may not interpret such results correctly. Do your homework before making any decisions and consider consulting a professional advisor.
Posted by CanadianInvestor at 10:00