Dogs of the Dow and the TSX - Are they nasty or nice investing pets?

It's now the dog days of summer, so it's a good time to write about an investing theory referring to dogs that seems to have worked pretty well since it was first put forward by Michael O'Higgins in his 1991 book Beating the Dow.

The theory is called the Dogs of the Dow. The method is ultra-simple: once a year, take the list of the 30 stocks in the Dow Jones Industrial Average, sort them by dividend yield, and buy an equal amount of the ten highest yielding stocks. Hold them for a year and then the following year, sell the stocks no longer in the top ten and buy the replacements. By convention the buying and selling is done on January 1st, though there is nothing to prevent anyone from starting at any time during the year.

The popularity of the strategy has even led to the creation of a dedicated Dogs of the Dow website, where the 2014 January 1st list of Dogs is shown in blue. For someone buying today, a stock screener such as Finviz.com with the DJIA index selected, will list all its components, which can then be sorted by yield.

The logic and rationale of the Dogs method is that the dividend yield indicates stocks which are out of favour, usually only temporarily. Dividend yield is defined as dividends over current stock price so the yield of a stock rises when price declines i.e. the stock falls out of favour. Thus, the Dogs strategy is often described as a simple, crude strategy for identifying Value stocks.

Performance - Up-to-date total return data seems difficult to find, but up to 2011 the Dogs strategy performed the same as the overall DJIA with a 10.8% average over the preceding 20 years according to Dogs of the Dow. Since then, the Dogs have edged ahead, judging by the price in blue in the chart below of the sole ETN that tracks the Dogs, the Deutsche Bank AG ELEMENTS Dogs of the Dow Total Return Index Note (NYSE: DOD, MER 0.75%) compared to the red line of the DJIA. 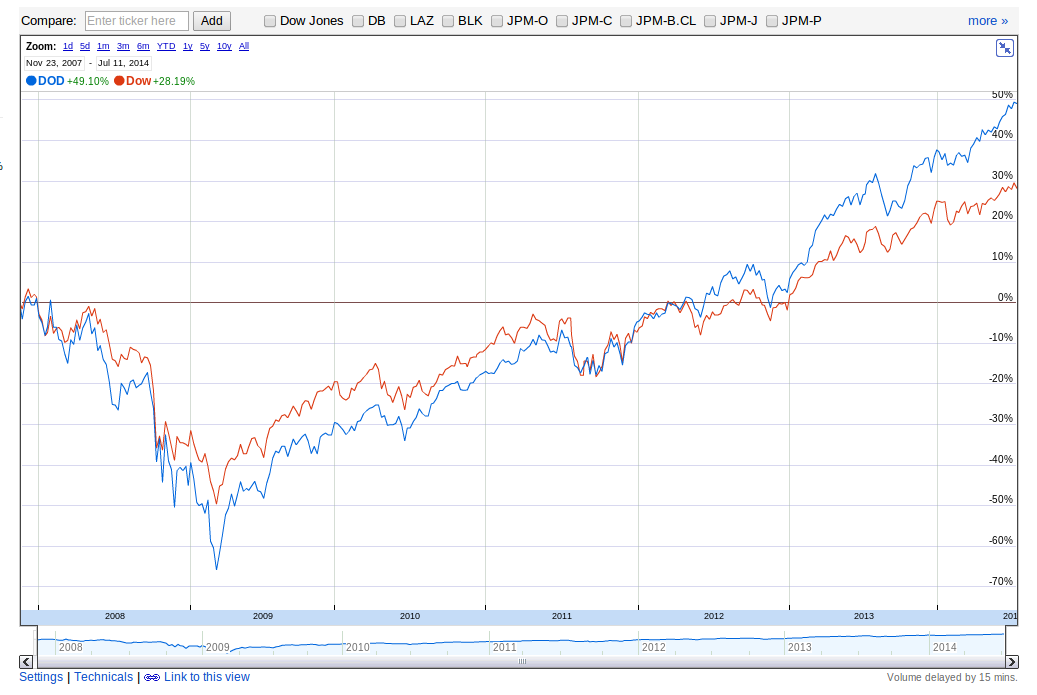 Criticisms and caveats:
Dogs of the TSX
The same idea has been applied in Canada on stocks in the TSX 60 Index, though with some modifications by the originator of the Canadian version Dave Stanley, like the exclusion of deliberately high-yielding income trusts and former trusts (as described in the Beating the TSX Finiki article and as discussed in this thread on the Financial Wisdom Forum), to ensure a similar focus on blue chip, large cap stocks.

Current List of TSX Dogs:
Using the superb Stock Rover screener, we extracted all the high yielding larger cap stocks on the TSX, then filtered out all stocks that are not included (rows highlighted in pale yellow) in the TSX 60 Index, as well as any income trusts and former income trusts (rows in tan) not already excluded to come up with the table below. The white rows are the TSX Dogs as of July 11. 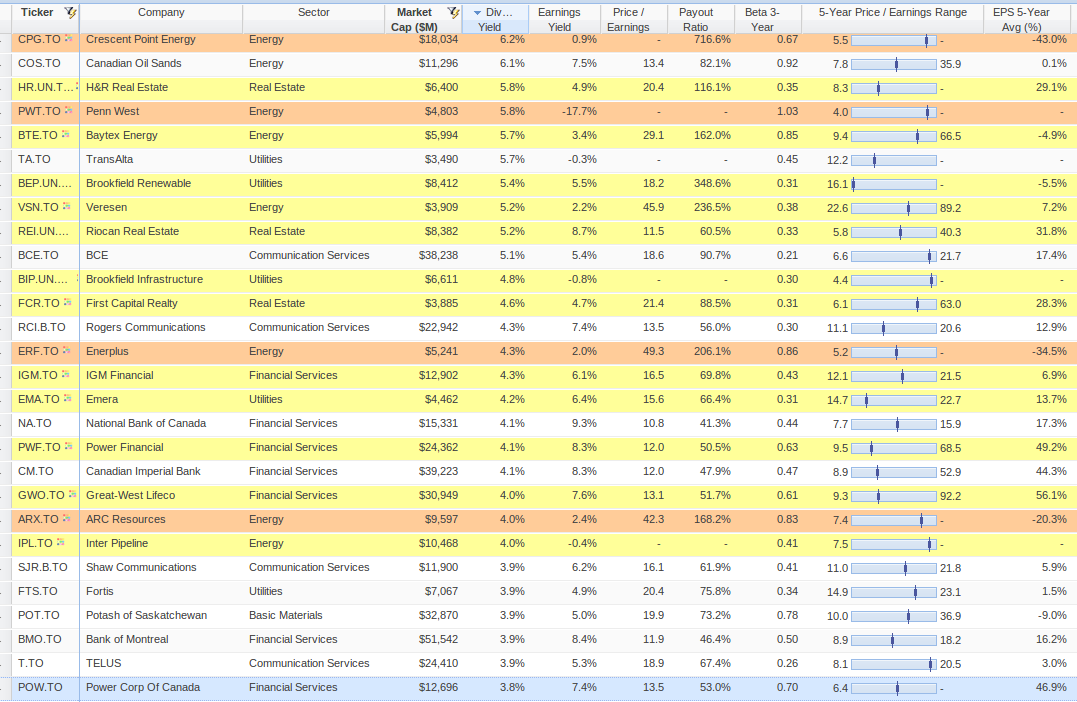 The rules of selecting the Dogs are not set in stone. It's an active strategy, not a passive one and we investors can change what we want.  Some of the companies may be in the doghouse for good reason. Norm Rothery of Stingy Investor has just published in MoneySense his list of Top Dogs of the TSX, filtering out stocks where the dividend may be in danger, as indicated by dividends that exceed earnings. Notice how TransAlta (TSX: TA), top of the list above with highest yield, got dropped, no surprise given its negative earnings. Some investors might consider TransAlta a good buy as a turnaround candidate but others, who want only to buy high quality blue chip companies and their dividends, may well want to exclude TA, which is not even a very large cap company.

Other differences between our list above and Rothery's probably arise because his list came from data as of June 30th. Two on his list - Telus (TSX: T) and Power Corporation (TSX: POW) - are 11th and 12th in line in the Stock Rover screen. Market prices are always changing.

The resulting Dogs looks less like ones that will bite you and more like faithful companions. Most of the current Dogs have shown up in our previous posts of centenarian companies (National Bank, CIBC, BCE and Bank of Montreal and blue chips (as well as the centenarians, Potash Corp, Rogers, Shaw) or dependable utilities (Fortis).

Other variations of the Dogs selection method are also possible e.g.:
Due to the lack of diversification / the high sector concentration (4 out of 10, or 40% on an equal investment basis, are in Communication Services, with none in Industrials or Consumer stocks and only 10% each in Energy and Materials), we would not think it advisable to put all a Canadian equity allocation into this strategy. However it does offer a way to identify stocks that currently offer higher dividends at a reasonable price and to establish long term positions in high quality companies.

Disclaimer: This post is my opinion only and should not be construed as investment advice. Readers should be aware that the above comparisons are not an investment recommendation. They rest on other sources, whose accuracy is not guaranteed and the article may not interpret such results correctly. Do your homework before making any decisions and consider consulting a professional advisor.
Posted by CanadianInvestor at 07:09