We've previously noted the income and return attractions of high dividend stocks and ETFs concentrated in such stocks. After all, producing cash for shareholders is ultimately what investors want from companies. But dividend investing is evolving. Instead of only considering the dividend cash payout, some adjustments and refinements have been found by researchers to be worthwhile.

1) Dividend Yield = The latest quarterly dividend per share multiplied by four to get a projected yearly total and then showing that as a percentage of the current stock price.

This is the long-recognized traditional measure used by dividend investors to find attractive companies and it does still work, just not as well as Shareholder Yield.

2) Net Share Buyback Yield = The net amount of shares bought back by the company in the previous year, after subtracting shares issued.

Although the most accurate calculation would be in dollar terms, expressed as a percentage of current company market capitalization, an accurate enough simplification is simply to take the percentage change in common shares outstanding (as Mebane Faber points out in his excellent mini-book Shareholder Yield; the book's website also contains links to various research articles on the topic).

The reason it is important to consider share buybacks and issuance is that some years ago companies, especially in the USA, began returning cash to shareholders by buying back their shares in the open market. Changes in relative tax rates that favoured capital gains, or stopped favouring dividends, are often cited as a key reason stimulating the shift to buybacks. In any case, the chart below from index providers Standard & Poors, detailing the rise of buybacks from negligible amounts in 1980 to as much or more than actual dividends today in the USA, shows it is essential to consider repurchases. 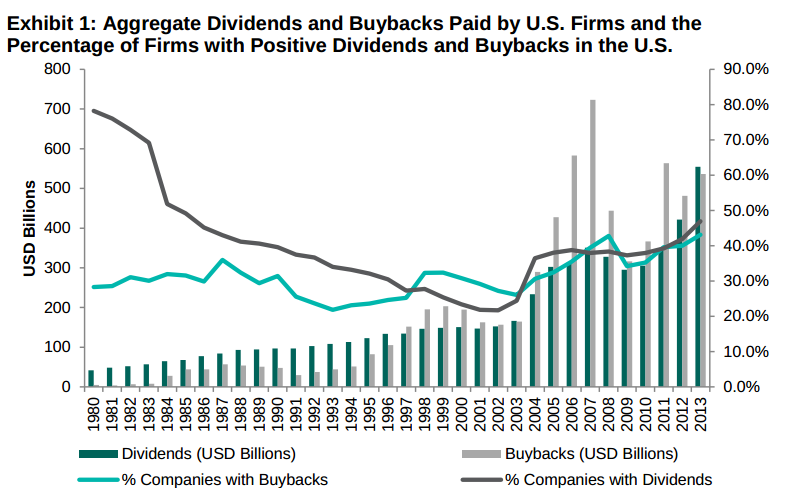 In Canada, the relative tax attractiveness to investors of dividends versus the capital gains that buybacks engender for the investor, has remained much more muted than in the USA (see Table 2 in Taxation, Dividends and Share Repurchases: Taking Evidence Global by Marcus and Martin Jacob for the tax penalty on dividends through the years in Canada, the USA and 23 other major countries). There is not such a large incentive for Canadian companies to send cash back to shareholders by buybacks instead of dividends. But there are still many companies in Canada, as we see below in our comparison table of some Canadian dividend stocks, where net repurchases or issuance, dwarf the effects of cash dividends.

3) Net Debt Paydown Yield = The year over year difference in the debt load of a company as a percentage of market capitalization.

This metric is not measuring return of cash to shareholders. Rather, it measures the judicious use of cash by company executives in a way that ultimately benefits shareholders. Instead of wasting cash inflows / profits in empire-building like poor acquisitions or low-return projects, the executives avoid temptation by paying down debt. Shareholders benefit since less cash inflow goes to paying interest on debt and more to profits and potentially higher dividends down the road. In their research paper Enhancing the Investment Performance of Yield-Based Strategies Wesley Gray and Jack Vogel discovered that incorporating debt paydown in picking better stocks resulted in higher returns ... not without fail in every case, it should be noted, but as a strong average.

The Return Difference - Example of the S&P 500 from 1982 to 2011
Gray and Vogel found that selecting stocks with the highest yield for the three components of Shareholder Yield, taking each component by itself, produced significantly higher returns than the S&P 500 index average, repeating the findings of many other studies. But they also found that picking stocks with the highest yield combination of all three, Shareholder Yield, produced the best return of all.

Unfortunately, there does not seem to be a free website that provides Shareholder Yield already calculated for Canadian stocks. We had to do our own calculations, which is not too complicated though it takes a while for many stocks. In our table below, dividend yield, dividend growth and total 5-year return came straight out of GlobeInvestor WatchList. Google Finance Canada provides quarterly Balance Sheet numbers for total debt and number of common shares (e.g. for Enbridge here) that, along with the market cap from GlobeWatchList, allowed us to work out the change over the most recent four quarters to come up with net buyback yield and net debt paydown yield.

We've taken the top/best and bottom/worst parts of CDZ's companies sorted by Shareholder Yield in the light blue column. 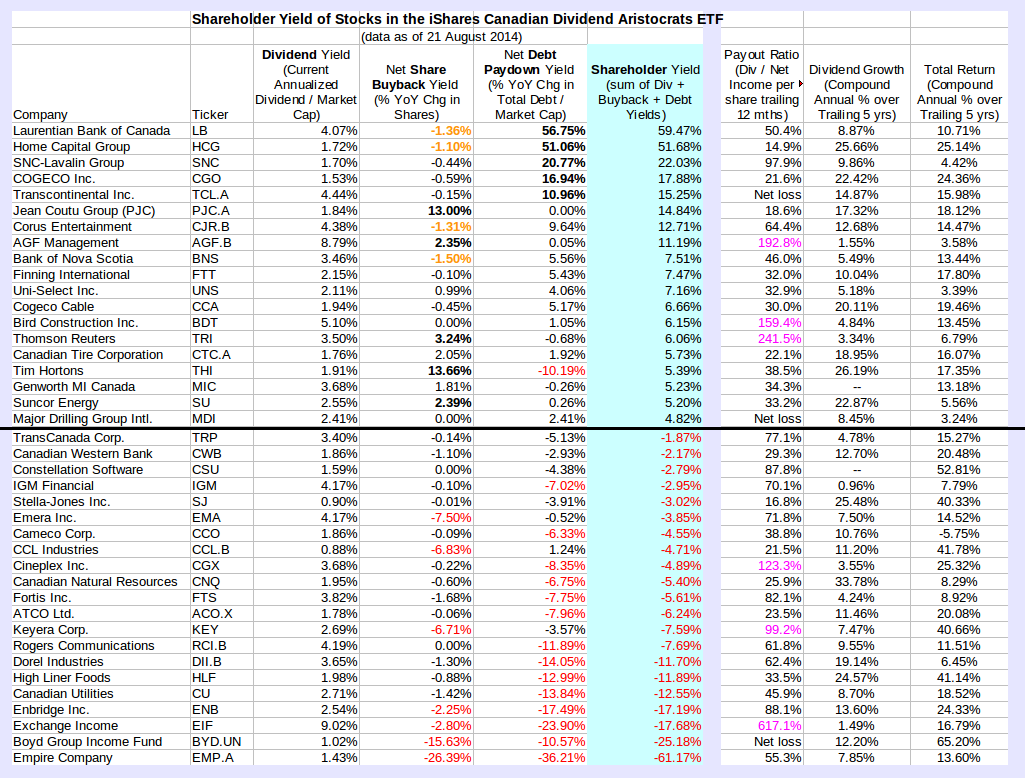 The results are surprising. There is little relation between Dividend Yield and Shareholder Yield. At the top of the table, some companies with modest dividends like Home Capital Group and SNC-Lavalin have extremely high Shareholder Yield by virtue of significant debt reduction. A handful, like Jean Coutu and Tim Hortons have instead relied on big share buybacks to deliver high Shareholder Yield. Several companies like AGF, Bird Construction and Thomson Reuters have good-looking Shareholder Yield numbers yet their dividend payouts (cf the Payout Ratio column) far exceed net income and may thus not be sustainable. Yet others - Transcontinental and Major Drilling - have net losses, raising the same question even more urgently.

At the bottom of the table are many companies that have been counter-acting their sometimes elevated dividends with share and/or debt issuance to reduce Shareholder Yield to a negative number. In the case of Exchange Income Corp (EIF) both debt and share issuance are allied with a payout ratio of dividends more than six times recent net income. No wonder bad news articles like this one in the Globe are appearing about EIF. In the case of Empire, which last year swallowed a huge acquisition in Safeway, the piling on of new debt and shares to finance the acquisition may make good business sense. Empire's Payout ratio still looks sustainable at 55% though it used to be below 20% before the Safeway acquisition. It is worth looking at Shareholder Yield in combination with Payout ratio - Gray and Vogel found that among low Yield companies, those with the highest Payout ratios tended to under-perform.

Bottom Line: Shareholder Yield appears to offer an additional angle, though not a complete definitive answer, to the assessment of individual stocks. It suggest further useful questions to ask, such as reasons for share or debt issuance and the sustainability of dividends and repurchases.

ETFs based on these factors
The ETF providers have observed the importance of share buybacks, especially in the USA, and have stepped forward with funds that select holdings on more than high dividends.

Disclaimer: This post is my opinion only and should not be construed as investment advice. Readers should be aware that the above comparisons are not an investment recommendation. They rest on other sources, whose accuracy is not guaranteed and the article may not interpret such results correctly. Do your homework before making any decisions and consider consulting a professional advisor.
Posted by CanadianInvestor at 18:21