Safe stocks?
Is there any simple way to invest in equities while protecting against downside risk like the huge dip of the 2008 credit crisis? Take a look at the Google Finance chart below. Suppose you had invested in a combination of the three stocks in the chart - Fairfax Financial Holdings (TSX: FFH), Metro Inc (TSX: MRU.A) and Shoppers Drug Mart (TSX: SC) - which happen to be three of the top holdings in the BMO ETF we discuss below. The crash would have been a minor blip at most.

The idea of stable safe stocks, so-called blue chips or perhaps defensive stocks, has long been put in terms of certain sectors like utilities and er, banks. But try adding banks, such as Canada's two largest - Royal Bank of Canada (TSX: RY) and Toronto Dominion (TSX: TD) - e.g. in this Google chart. The banks went down right along with the TSX, in fact leading the way since banks comprise such a big chunk of the TSX. In 2001-02, the previous major market crash, banks would have been fine holdings while Fairfax tanked like tech stocks and the TSX. What to do?

Pick stocks with recent low volatility - By going directly to the challenge and gauging stocks by their recent (past 12-36 months) daily price volatility, it turns out that it is possible to assemble stock portfolios which provide considerable downside protection. Various research studies (cited and summarized in Why Low Volatility Wins on the Pension and Investments page for the recent Low Volatility Summit conference) going back to the 1970s and using data going as far back as 1968, show that taking the least volatile individual stocks produces the amazing dual result of, 1) lower overall variability and lesser drops during market crashes and; 2) higher, a lot higher - 2 to 4% per year - long term annualized returns. Meanwhile the most volatile stocks significantly under-perform. This spectacular anomaly to market theory that says risk and return should be related has been found to exist not only where it was first detected in the USA but in many other countries, notably including Canada, as the slide image below copied from the presentation shows for developed countries. 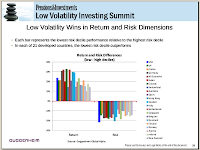 Sounds too good to be true, huh? - The cautious investor is always well advised to look closely when such a surprising result is presented. Yet the academic researchers, who are the most impartial and rigorously critical people around, spend their time trying to explain why the anomaly is there, and not denying its existence e.g. Harvard finance professor Malcolm Baker and two others in this recent paper, or the presenters of the slides linked to above. Among the multiple explanations for the anomaly offered:
Possible ETF implementation issues
The difference between research findings, in which taxes, management fees and transaction costs for rebalancing and reconstitution are ignored, and ETFs based on the findings that have to face these issues, may make or break the practical viability of low volatility ETFs. Since all low volatility ETFs are very new - less than a year since inception - there is no track record to prove how they will actually perform net overall.

The actual ETFs vary somewhat from the models that produced the research results. Variations include: restricting rebalancing to quarterly or semi-annually instead of monthly to contain turnover transaction costs; limiting candidate stocks to liquid, large cap stocks; using "recent" volatility to mean the past 12 or 36 months; picking component stocks based on price volatility for each stock independently, or volatility relative to the overall index i.e. beta, or as a volatility relative to each other in the whole portfolio. These ETF variations do not appear, from reading the testing done in the finance research, likely to change the pre-tax performance results much. Tax effects from probable more frequent distributions have not been examined but may lower net results for taxable investors somewhat.

Of course, the lower the expense ratio, the less net return loss for the investor. At 0.25% to 0.35%, the ETF expenses are reasonable, though not near the lowest of benchmark market ETFs, which hover around 0.1 - 0.2%

What do low volatility ETFs look like and how will they probably perform?
Here are some common features of the few existing low-vol ETFs:
Likely (intended) performance features:
Available ETFs (updated 3 May 2012)
Likely to change fast, as several have been added in the past few weeks, following on the huge success of the original Powershares ETF, which garnered over $1 billion in assets since its May 2011 inception.

To date, the low-vol ETFs' performance seems to be enticing. ZLB is well ahead of the TSX, while SPLV is a bit behind the S&P 500 despite experiencing a much smaller decline in the November dip - see the Google chart below where SPY represents the S&P 500.

In Aesop's fable of the Tortoise and the Hare, the slow steady progress of the Tortoise wins out over the much faster but erratic Hare. So it is with investing, or was. Will history repeat itself, or is this one of those cases where, as those disclaimers always say, "past performance is not indicative of future results"?

Disclaimer: this post is my opinion only and should not be construed as investment advice. Readers should be aware that the above comparisons are not an investment recommendation. They rest on other sources, whose accuracy is not guaranteed and the article may not interpret such results correctly. Do your homework before making any decisions and consider consulting a professional advisor.
Posted by CanadianInvestor at 04:27

Thanks for the article. I've printed this to read as I trust your analysis and need to learn more about this option. It's a name I see a lot but don't know all that much about.

Thanks Wade, and may I return the compliment for any readers here, your blog Pensions, Retirement Planning and Economics at http://wpfau.blogspot.com/ has a lot of worthwhile material on issues like withdrawal during retirement.