Last week's post pinned donkey ears on those CEOs with the largest gap between what they earned in 2010 and large losses investors experienced. This week, let's take the same list of best paid CEOs to see which ones provided excellent returns for shareholders and thus earned their pay.

Stocks with big investor bang for CEO bucks
Several ways are possible to rate CEO compensation against investor returns. We have used 5-year total returns (which includes both dividends and stock price appreciation) to avoid short-term year to year variations. Then we took that return and divided by CEO pay, as reported in Canada's CEO Elite 100 to give us the pale yellow column in our Bang for Bucks table below. The higher the number the better, i.e. more return "bang" for CEO "bucks". It is important to note that 5-year returns were as of November 2011 per the Globe and Mail's 2011 Board Games Governance rankings of Canadian companies on the TSX. Even five year results can change quickly, as we explore below. 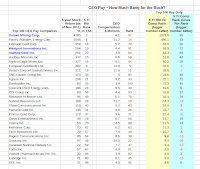 We also used as a secondary measure the relative position (rank) in the CEO pay table against the position in the returns table, as shown in the pale blue column. When a company is way down at 95th in the pay column but high up at 2nd in the returns results, as our top company Osisko Mining Corp (TSX: OSK) is, that's really good. A negative number, such as minus 18 at Gabriel Resources shows a situation where the CEO was higher up relatively than the investor. At least Gabriel's returns were strongly positive for the investor.

Bang for bucks not great compared to all TSX companies
What about the companies whose CEOs were below the Top-100 pay level? That would mean less bucks and possibly more bang. Since we do not have the pay data for everyone, we have kludged a relative ranking evaluation (same as the second method above) by arbitrarily assigning 101st position to all the other TSX companies. Comparing thereby against all TSX-traded companies we find that only a few companies - three amongst the top 30 as highlighted in blue - manage to stay in the upper reaches of great investor results for CEO pay: Osisko Mining, Westport Innovations (TSX: WPT) and Alamos Gold (TSX: AGI). A strong caution about the limits of using only CEO pay to judge a company is the appearance of investor disaster Sino-Forest amongst the top TSX list. 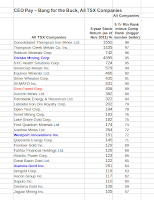 Success may be fleeting
Even in the short space of a few months, the results can go topsy-turvy. We took the best 30 companies in our first table and quickly created a Watchlist in GlobeInvestor (it's as easy as entering the stock symbols or company name) and find in the snapshot table image below that many of our previous stars have lost much luster. Research in Motion (TSX: RIM) now has a significantly negative five year cumulative return of minus 21%. HudBay Minerals (TSX: HBM) is also into investor pain territory at minus 13%. Even our top performer Osisko has gone backwards to a modest 14% five-year return.

The Watchlist table contains some of the many other user-selectable data items available in that tool, of which we have picked a few, such as recent earnings, return on equity, profit growth, P/E ratio and dividend growth, that either reassure or caution about these companies. The moral of the story for the investor is that reasonable CEO pay is one indicator but certainly not the only one to consider in deciding whether the company is well run and a good investment.

Disclaimer: this post is my opinion only and should not be construed as investment advice. Readers should be aware that the above comparisons are not an investment recommendation. They rest on other sources, whose accuracy is not guaranteed and the article may not interpret such results correctly. Do your homework before making any decisions and consider consulting a professional advisor.
Posted by CanadianInvestor at 09:51