As we have been doing every six months or so, we are again taking a look at the Canadian equities market to see which sectors and companies are currently in hot demand (the Darlings) or out of favour (the Dogs). To do that we compare the relative weightings of sectors and stocks in two ETFs:
We will also examine interesting changes in the Darlings and Dogs from previous comparisons in February 2013, August 2012, January 2012, June 2011 and the original post in April 2010.

The Numbers
The table below shows the companies and the sectors colour-coded - Darlings in Green and the Dogs in Red with the really big differences between XIU and CRQ highlighted in Yellow. The table also shows the change in internal weighting over the past six months for each ETF, which tells us stocks and sectors that have been moving up or down, either in terms of price (XIU) or fundamentals (CRQ). The bigger shifts are highlighted in Bold. 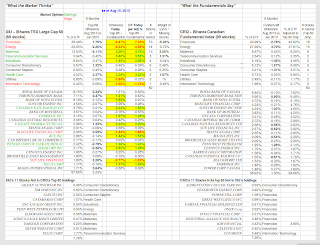 As a cross-check to be sure the sector differences are not due to the fact that CRQ has 28 more holdings than XIU's 60 (which might tend to result in XIU being more concentrated and have higher individual percentages than CRQ) we've re-calculated weights for CRQ using only its top 60 holdings like XIU. This adjustment for the most part makes little difference to the results but it does matter a lot for the Utilities sector and a couple of banks.

Financials - This is a sector where the market view and the fundamental view have been converging. Market value has been rising while the fundamental value has been dropping. As a result, today there are no real Darlings, and the Dogs - Manulife (MFC) and Sun Life (SLF) - are much less pronounced than previously.  That CRQ continues to have a much heavier weighting in our table in the Financials seems to be a quirk of XIU's construction.  Several Financial companies that are in CRQ such as Great West Life, Power Financial, Fairfax Financial Holdings (see the list of the main stocks not held by the other fund at the bottom of the table) don't even figure in the XIU portfolio. And those companies are firmly within the top 60 largest market cap stocks on the TSX.

Energy - In this sector, there has been a convergence of market view, which in this case has been falling in total weight from the February update, while the fundamentals have been rising in weight in CRQ. Now CRQ has more weight in Energy than XIU. This is a dramatic reversal of situation from a few years ago. Only one big company - Enbridge (ENB) - remains as a market Darling.

Encana (ECA) meanwhile remains as the perpetual Dog. It has been sliding down the cap-weight table since it dropped out of the top 20 a year ago.

Materials - The recent battering of miners has definitely reduced the love factor but our previous description as perpetual Darlings still seems apt. Potash Corp (POT) and Goldcorp Inc (G) still are priced at levels significantly higher than accounting fundamentals justify. Apart from those two stocks, the difference in weight between XIU and CRQ is due to the fact that XIU includes several miners excluded from CRQ, and whose cap weight is not in the top 60 anyway.

Telecommunications - The story is exactly the same as in February - the two Darlings BCE Inc (BCE) and Telus (T) continue to be the object of market desire, being vastly overweight in XIU compared to CRQ.

Industrials - Neutral no longer, the rebirth of Canadian Pacific Railway (CP) has made it a Darling, which along with a continuing Darling - Canadian National Railway (CNR) - makes the whole sector so.

Consumer Discretionary - Steady as she goes is the byword, this sector remains neutral. Market views and fundamentals are closely in balance.

Consumer Staples - This sector has made resurgence since February and is no longer a Dog. It is now neutral. The individual companies themselves look pretty much in balance too.

Health Care - There is one big love in this sector - Valeant Pharmaceuticals (VRX) is the sole health care company in both XIU and CRQ. The market must be anticipating very good times ahead for VRX.

Utilities - If we adjust for the fact that there are more utilities in CRQ and take only the top 60 holdings in CRQ, then the smaller utilities fall away and XIU is reasonably closely in balance with CRQ. The sector and individual companies are neutral.

Information Technology - Research in Motion (RIM)'s name change to Blackberry (BB) has not made much difference. The weight based on fundamentals is slowly falling but not nearly as fast as the weight set by the market view. So the company and the sector as a result remain a firm Dog.

The Darling and Dog sectors and stocks since 2010
Some sectors and companies are still in the same rut of being either Darlings - Materials (Potash Corp and Goldcorp) and Telecommunications (BCE and Telus) - or Dogs - Financials (Manulife and Sun Life) and Encana. The other sectors and stocks have shifted into or out of favour. For the first time since 2010, when we started this series of posts, there are more Darling (4) than Dog (3) sectors. 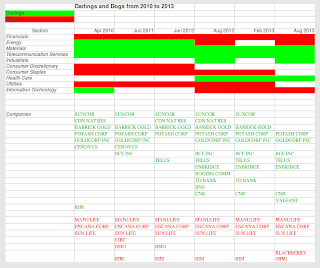 How do the Darlings and Dogs stocks' numbers look?
Again, we checked the stocks in a Globe&Mail WatchList to see if the stock evaluation data it contains could suggest whether they really have been good or bad. The tale is quite similar to February. The table screenshot below shows that ranking the stocks by Return on Equity puts two of the Dogs at the bottom. The most notable change is that Manulife has been making a resurgence in its financial and market returns performance. Perhaps there is more value yet to be recognized. 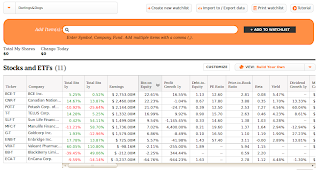 The stocks with the most extreme divergence between the market view and the fundamentals are the best candidates to offer the greatest future surprise. That's probably good hunting ground for the investor looking for under-valued stocks.

XIU and CRQ can also be used directly as nicely-diversified investments for those investors who do not feel confident, or who don't have the time, to investigate individual stocks. The differences in weightings and holdings are only a couple of aspects in comparing the two ETFs. See our previous posts reviewing Canadian equity ETFs here, here and here.

Disclaimer: this post is my opinion only and should not be construed as investment advice. Readers should be aware that the above comparisons are not an investment recommendation. They rest on other sources, whose accuracy is not guaranteed and the article may not interpret such results correctly. Do your homework before making any decisions and consider consulting a professional advisor.
Posted by CanadianInvestor at 14:15