Our May review of Canadian high-yielding mortgage companies listed seven publicly-traded choices facing the investor. We missed a few very new offerings, as we found out when reading MoneySense magazine's MICs: Make money on debt article. The article provides only some basic info on the various options so let's take a closer look to help readers possibly interested in adding this type of holding to their portfolio. In addition, we'll see how the on-set of rising interest rates is affecting mortgage companies.

I) The New Entrants
There are six companies that are new on the market since the beginning of 2012. An over-riding challenge is thus that there is little track record to help our assessment.

Hold in registered accounts for some, in non-registered for the others
In our comparison table above the first thing we notice, a critical factor for appropriate choice of account in which to hold these funds, is that there is a mix of tax status - ERM, TZZ and TZS are true MICs that are tax-exempt themselves if they pass all income, which is 100% ordinary interest, through to investors for taxation in investor hands. The ROI funds are all taxable closed-end funds that distribute, for the moment at least, lesser-taxed capital gains or non-taxed return of income.

The ROI funds are excellent for non-registered taxable accounts, until the complicated forward agreement that transforms interest into capital gains runs out. The March 2013 federal budget announced that this tax loophole would henceforth be closed and these three funds have been caught in the net. Perhaps that is the reason these funds all trade at a considerable discount to their Net Asset Value (NAV), or maybe it is the discount often observed on closed-end funds. Certainly the unitholder's right to redemption at NAV once a year doesn't work very well to let arbitrageurs trade away the discount as no more than 15% of outstanding units may be redeemed per year. Another possible reason for a fairly big discount to NAV may be lingering doubt following a temporary suspension of redemptions in 2012, an action that caused internal review and the eventual launch of ROI funds later in 2012 onto the TSX public market. After the forward agreements expire, the ordinary interest income that will be distributed henceforth means that holdings of ROI funds would then also work best in a registered account.

Distribution re-investment good for some, bad for others
The DRIP plans of the ROI funds, which re-invest at NAV, are useless for the investor as long as NAV is below market price. Better are Trez Capital's plan which re-invests at the lower of market price or NAV within limits.

With such new funds and no track record, we are faced with a difficult job to try judging whether these companies can maintain, let alone increase, their cash payouts over time. Our second table below presents some pertinent information. Unfortunately, as we show, Eclipse and ROI do not even reveal the average yield of their holdings. Trez's monthly portfolio summaries show a pie chart with the spread of mortgage holdings' interest rates that suggest the bulk garner a rate above what the MICs pay out, so that is a positive sign. 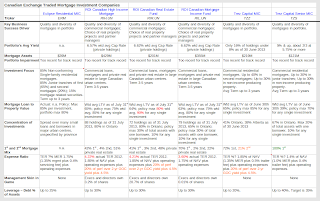 Two of the ROI funds - RIH.un and RIR.UN - have experienced steadily declining NAV in their short lives, a sign that they have been paying out more cash than the holdings have been generating.

Beyond interest revenue, the other key to sustainable distributions is the level of expenses, which reduce cash available to distribute. The published management expense ratio is not the whole story. Service / trailer fees paid out to financial advisors or brokers whose investor clients hold the securities, must be added in, as well as operating expenses and performance fees. Performance fees (paid for returns that exceed a benchmark like a 2-year Government of Canada bond rate plus either 4 or 4.5%) in particular must make the investor wary since they appear destined to push up total fund expenses considerably. Two of our previous batch of mortgage companies that carry such a performance fee - First National Mortgage Investment Fund (FNM.UN) and Timbercreek MIC ((TMC) - have had higher actual total expense ratios. It will not be surprising to see the companies in our new batch with performance fees - RIH.UN, RIR.UN and TZZ - generate high total expenses when they come to publish their first annual reports (which is where this information can be found).

The funds with performance fees also hold more aggressive, riskier mortgage portfolios, with higher percentages of junior first (see explanation of differences in precedence in the Eclipse Prospectus on page 14) and second mortgages and higher ratios of mortgage loan to property value. As a consequence, the interest rates charged and the payouts to investors are higher.

The ROI funds have a final source of uncertainty that could be good or bad for returns and ultimately, payouts. Unlike MICs, which are not permitted to do so, the ROI funds all develop and own property with other partners.

Concentration of mortgage assets
ERM and TZZ have the most diversified assets in terms of geographic spread and limits per borrower.

Investment focus, term duration, loan-to-value ratio and 1st vs 2nd proportions
The safest offering appears to be TZS. It is the only one to hold 100% first mortgages, the least in junior tranches and the lowest loan to value actual ratio and policy limit.

Management skin in the game is either none or significant
Only in the case of RIR.UN, where managers and directors own about 21% of the units, does management hold any significant stake in the success of the stock.

Amount of leverage employed
TZZ has the lowest limit on the use of leverage and TZS the highest. The thinking appears to be that it is ok to put more leverage on a safer portfolio. It does lessen TZS' safety back towards the other stocks though.

II) Effect of rising interest rates
Since early May interest rates have started rising. The effect on all our mortgage companies, both the present and the previous group, has been to lower stock price. It makes sense since they all offer stable relatively fixed income and as is the usual case for fixed income, rising interest rates, aka required return, means a falling price. The charts below from Yahoo Finance show the almost universal effect. 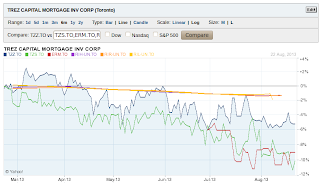 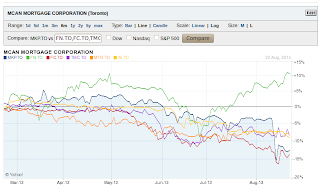 The same effect can be seen in the table below of the change in cash yield (current payout as a percentage of stock price) from May to today. These changes are mostly roughly in line with the 0.3% or so rise in 2 to 3 year Government of Canada bond rates. 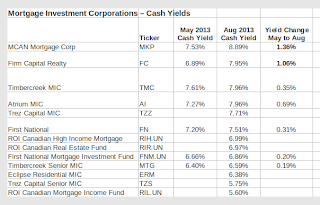 Two companies have had much bigger price declines / yield rises. MCAN Mortgage has just released poor financial results with earnings per share down 27% and taxable income down 64%, the latter figure which the company warned may well cause a reduction in the cash distribution. It is perhaps little wonder the CFO was replaced in June. Firm Capital's (FC) fall is harder to explain with tangible news - its latest quarterly results showed only a small 1.8% decline in profits. The figures do not threaten a distribution cut. FC looks like a reasonable value at the moment.

Bottom Line
Of the new offerings, TZS offers the best choice of safety and probable stability of distributions along with a low expense ratio. However, a very similar offering from the May post list, Timbercreek Senior MIC (MTG) is even more attractive. First, it provides a 0.8% higher yield. The company has also announced a conversion plan (still to be approved by shareholders) that would amongst other effects, eliminate the 0.5% trailer fee and thus appreciably reduce expenses.

The recent disappointment of MCAN, which looked good back in May, illustrates well how even the amount of digging we have done is not necessarily sufficient to avoid trouble and obtain the steady high income we seek. Heavy insider selling in late May and early June would have been a warning sign, as would have been the resignation of the CFO. Now that the price has dropped a lot the insiders are buying.

Disclaimer: this post is my opinion only and should not be construed as investment advice. Readers should be aware that the above comparisons are not an investment recommendation. They rest on other sources, whose accuracy is not guaranteed and the article may not interpret such results correctly. Do your homework before making any decisions and consider consulting a professional advisor.
Posted by CanadianInvestor at 15:39

How did you find the cash yield for these MICS?

Do you have a completed list of the public mics that have been traded in the market?

The cash payout amount can most reliably found on the website of the company itself.e.g. Timbercreek - http://www.timbercreek.com/investments/timbercreek-mortgage-investment-corporation/overview

Then the yield is a matter of dividing the annualized payout by the current share price.