Hedging Foreign Currency Exposure - Is it worth it? CalPERS Changes Tack and ETF Case Studies

A few weeks ago, the California Public Employees' Retirement System (CalPERS) reviewed its Currency Overlay Program review and decided to stop hedging its foreign currency exposure. Hedging aims to eliminate the effect of foreign currency swings on the returns of foreign holdings, especially to mitigate the steady appreciation of one's own currency which reduces foreign returns. That the sixth largest pension fund in the world, which is about 50% bigger than Canada's national CPPIB fund, has made that decision should cause us to reflect.

Currency hedging has not helped CalPERS
CalPERS' aim when it set up the program in 1992 was to reduce the volatility of the total fund portfolio arising from the rise and fall of foreign currencies against the US dollar associated with its substantial foreign holdings. But CalPERS has found that ... "There are no statistically significant benefits, such as • Decreases in volatility, and • Increases in net returns". In addition, they have found that the hedging is costly and complicated to carry out.

Pension fund peers for the most part do not hedge either
Part of CalPERS decision process was to review what other pension funds are doing about their foreign investment currency exposure. More than half, according to Appendix 2 (image below) of the Currency Overlay Program document, don't have a policy to hedge and of those that do, only apply it to specific types of assets like fixed income or a minor portion of equity. CalPERS itself only hedged 15% of its foreign positions up to the change. 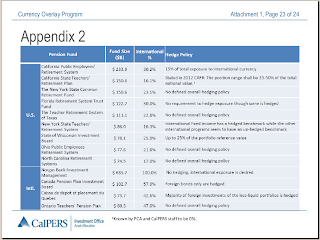 Canadian Dollar-Hedged ETFs are popular in Canada
There are quite a few Canadian-based ETFs that hedge their foreign currency exposure. A search on ETF Insight for US equity ETFs traded in Canada pulls up 41 ETFs, of which more than half - 21 - hedge against US dollar shifts. The ETF with the largest assets by far - iShares S&P 500 Index Fund (CAD-Hedged) (TSX symbol: XSP) - is hedged. Similarly, the largest foreign equity developed country ETF - iShares MSCI EAFE Index Fund (CAD-Hedged) (XIN) - is hedged. (Important note: the hedge in XIN is against the currencies of the under-lying foreign countries like Euro/Yen/Sterling versus the Canadian dollar, NOT the US dollar, even though XIN holds the US dollar-traded iShares MSCI EAFE (EFA) - Canadian Couch Potato explains the idea and CanadianFinancialDIY gives a numerical example.)

Why are hedged ETFs so popular?
Likely it's the reaction of investors to the trend in the Canadian dollar (CAD) versus the US dollar (USD), shown in the Trading Economics chart below. The chart line displays the number of Canadian dollars per USD. The rising line up to about 2002 meant that it took more and more CAD to buy one USD, the peak being around $1.60 CAD per USD i.e. CAD depreciation. Depreciating CAD means an investor's USD investments are worth more when translated back into CAD. That boosts returns in terms of CAD. Thus, we have labelled that part of the line with green text since it is beneficial for a Canadian investor. Conversely, since 2002 CAD has been appreciating vs USD (fewer CAD required to buy one USD). The line has been generally trending down and that has had a negative effect on a Canadian's USD investments - thus our red text. The trend was temporarily interrupted during the 2008 financial crisis as the flight to the safety of the USD caused a large spike of USD appreciation/CAD depreciation. That turned out to be hugely beneficial for Canadian investors with USD holdings since it offset a significant portion of the equity market drop, as we wrote at the time and show below in discussing an investment in the S&P 500. 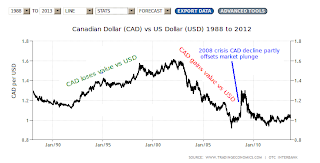 S&P 500 Case Study
How would a Canadian investor in the main US equity benchmark the S&P 500 have fared? Would it have been better to hedge against currency effects or not? We'll use the Stingy Investor Asset Mixer tool, which gives us historical results and conveniently has a selector to display returns either in CAD (i.e. unhedged) or in USD (hedged). The tool allows selection of start and stop years for annual returns back to 1970. We'll compare results against the most popular CAD-hedged S&P 500 ETF mentioned above, iShares' XSP, which has now been in existence for ten years.

The results are in the comparison table below. As usual green numbers are good, red are bad and the red outline cells are especially shocking. 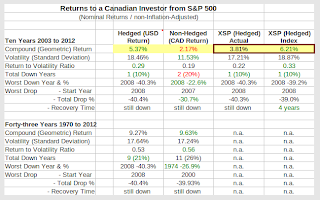 Returns in the last ten years (2003-2012) have been better for a CAD-hedged S&P 500, which jives with the return-sapping effect of a Canadian dollar that appreciated during that period. That first line of our table, highlighted in yellow, shows the benefit of hedging. But note the red outline cells - the actual compound return of XSP the ETF falls way short of its CAD-hedged index. Why? The idea of hedging is simple but it is very challenging in practice to carry out effectively. It's one of the reasons CalPERS cited for abandoning its hedging program.

A second result of note is that the non-hedged S&P 500 experienced much less volatility and a much smaller drop in 2008 when translated into CAD.

The third point we note is that in the long term (we've used the maximum data available from Stingy Investor of 43 years from 1970-2012), things even out a lot. There hasn't been a huge difference in returns between hedging and not hedging ... except that the results are before the practical difficulties and the return reduction from implementing hedging are factored in. The Stingy tool uses index returns so it is useful for comparing two indices but not for what actual ETF results will be.

MSCI EAFE Case Study
The same pattern of results comes from comparing the developed country MSCI EAFE (Europe, Australasia, Far East) index and its Canadian hedged version from iShares (TSX: XIN). 1) The hedged index return exceeds the non-hedged index in the short term of the last ten years but in the long term it evens out considerably; 2) the worst drop was much less for the non-hedged vs the hedged EAFE; 3) the actual ETF XIN's return is substantially below that of its index and on the basis of return to risk / volatility the unhedged version does better. A non-hedged EAFE ETF will not incur the large and chronic return reductions from the practicalities of the hedging activity, as we note when comparing the index vs ETF actual results for the under-lying fund of XIN, the iShares MSCI EAFE (NYSE: EFA). EFA's 10-year compound total return up to the end of 2012 was 5.27% and its index was 5.32%, a much smaller shortfall than XIN's. 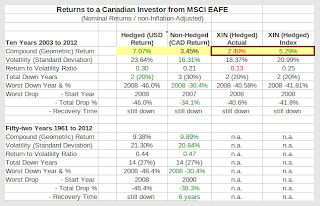 Bottom Line: It does not appear to be worthwhile for the long term Canadian investor to hold currency hedged ETFs. The non-hedged versions, whether traded in Canada or the USA, make more sense.