The TSX Composite - Which are the real blue chips?

A "Blue-Chip" stock is supposed to be a solid, dependable, financially sound company that has been around a long time. Let's have a look backwards at the biggest companies on the TSX to see which ones can claim to have performed like a blue chip. We'll go back to 1995 since that is the first year available in the University of Western Ontario annual lists of the TSX Composite Index component companies. Four years ago we did a similar review, so it will be interesting to see how the situation has evolved since. We'll broaden our review to the top 50 companies instead of only the top 25.

The Top 50 in 1995 - Creative destruction at work
The idea of capitalism being a system of creative destruction, where progress happens when the "newer better" replaces the "older less efficient" seems to have been at work on the TSX since 1995. As our table below shows with blue text companies being those still around in 2013 and the normal text being those that have disappeared in one way or another, there has been a lot of change. Less than half - only 23 companies - are still there in their old 1995 recognizable form. Half (25) were bought out or merged into larger entities. Two, in red text - Nortel and Loewen Group - went bankrupt. 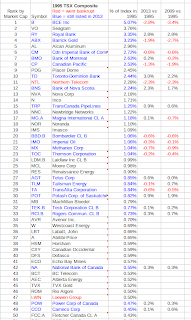 The biggest slide in relative market size was BCE Inc (TSX symbol: BCE). Its market cap dropped from 5.07% of the TSX Index in 1995 to 2.25% now. Some 1% of that can be attributed to its spinoff of ill-fated Nortel in 2000 but the company lost ground in the Internet and mobile telephone revolution. Interestingly, it has recovered 0.6% of that lost ground since 2009 so maybe there is hope yet. Perhaps it is finally adapting to the new reality. A couple of other companies have seen their market cap share drop substantially - Barrick Gold (ABX) and Canadian Pacific (CP). In CP's case, some of that decline was due to various spin-offs but part was also due to poor performance of the remaining railway against recently privatized and surging Canadian National Railway (CNR). Barrick just seems to have had poor performance as it combined with #9 Placer Dome and still lost ground.

Another company that has destroyed value is Kinross (not shown at #98 on the 1995 list). It is notable for having acquired two companies - TVX Gold and Echo Bay - in the top 50 and still lost ground.

The greatest destruction happened amongst forestry companies as former giants MacMillan Bloedel (#31), Avenor (34), Abitibi-Price (37) shrank and merged and were bought out. Today there is not a single forestry company in the top 50.

The Top 50 in in 2013 - Banks become more dominant and many new players
"What financial and credit crisis?", the banks and their shareholders might be asking. As our second table below of the top 50 in 2013 shows, all but one (CIBC) of the big 6 banks have gained in relative market weight and rank in the TSX. 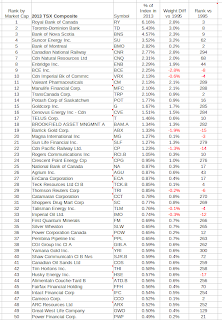 The second dramatic change is the arrival in top of the TSX of a whole raft of companies that did not exist or were at the bottom of the table in 1995. Starting with the privatized CNR (later in 1995) currently at number six by market cap and proceeding down through Valeant Pharmaceutical (VRX) whose predecessor Biovail was only first listed on the TSX in 1996, there are no less than 20 companies in the top 50 today that were ranked 200 or below in 1995 (to give a rank difference to those not even present in 1995, we have arbitrarily assigned those companies the lowest 1995 rank of 300). The new entrants are in every sector, except banking, where the dominant players are unchallenged.

Overall there is only a handful of nine companies that lost market cap weight or position from 1995 and still managed to stay in the top 50 in 2013. When a leading company weakens it tends to get bought out.

The big question is whether they will continue to perform or whether some of the new players will prove to be better blue chips for the future. The past may provide some indication of a durable corporate culture and product but it is not a guarantee.

Those who do not want the trouble of trying to figure out which will be the blue chips may simply wish to buy an index ETF, such as the BMO S&P/TSX Capped Composite Index ETF (ZCN), which holds all the TSX Composite Index or the iShares S&P/TSX 60 Index Fund (XIU), which holds the 60 largest companies. These ETFs automatically add and remove those stocks that no longer qualify, giving the average performance of the good and the bad.

Disclaimer: this post is my opinion only and should not be construed as investment advice. Readers should be aware that the above comparisons are not an investment recommendation. They rest on other sources, whose accuracy is not guaranteed and the article may not interpret such results correctly. Do your homework before making any decisions and consider consulting a professional advisor.
Posted by CanadianInvestor at 17:24

There are many companies who are provides blue chip stocks services. So, what are the things that we have to investigate before invest our money in a company.

Daniel, It is no accident that the list of blue chips obtained from looking at those which have stayed in the top of the TSX overlaps a lot with the Purple Chips list you link to, which is based on long term earnings growth. As you might have noticed, I did a blog post on Purple Chips last year - http://howtoinvestonline.blogspot.co.uk/2012/05/purple-chips-yet-another-angle-to.html