Are Stocks less, or more, risky in the long run?

Today we look at an investing question that divides investing and finance heavyweights like Vanguard founder John Bogle, Wharton School professor and best-selling Stocks for the Long Run author Jeremy Siegel, Princeton professor and best-selling A Random Walk Down Wall Street author Burton Malkiel, Boston University professor and standard finance textbook Investments author Zvi Bodie, Nobel winning economist Paul Samuelson and even 2013 Nobel laureate Robert Shiller, amongst many others. The subject of their dispute: whether an investment in stocks gets more or less risky as years invested rises. Surely such a straightforward question should be easy to answer and not subject to disagreement amongst such smart, well-informed people who aren't cynically trying to deceive us. The answer is important to deciding whether it makes sense to invest more in stocks when one's investing time horizon is longer.

Why the disagreement? It seems that much of it arises from differing meanings of risk. So we shall present the arguments and readers can decide which they think is best.

First, we'll point out that the debate is not about owning the stock of a single company. Companies regularly do go belly up and short term success can turn into total failure and loss of capital and most companies have a relatively short life (and it's been getting much shorter). Rather the debate is about owning a widely diversified index of stocks, such as the TSX Composite in Canada or the S&P 500 in the USA, where the losers like Nortel continually disappear and get replaced by new vigorous upstarts. Owners of iShares S&P TSX Capped Composite ETF (TSX symbol: XIC) or SPDR S&P 500 Trust ETF (NYSE: SPY) may not even notice, and probably don't care, about any of the hundreds of component holdings inside. It's what happens to the ETF over longer and longer runs that matters.

Less risky (Siegel, Malkiel, Bogle)
The justification: History tells us that the longer the holding time period, on a basis of real/inflation-adjusted, buy and hold, total return/ reinvest dividends,
i) the lower is the range of minimum to maximum returns,
ii) the lower is the chance of making a loss,
iii) the progressively smaller is the maximum negative return, turning into a progressively larger positive return.

The chart below, from Siegel's 4th edition (the 5th, updated for data through the recent financial crisis, is to be released in January), shows the numbers from 1802 to 2006 for the USA 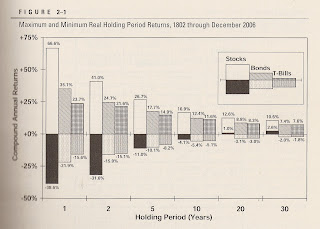 Beyond about 17 years holding period according to Siegel, stocks never had a negative holding period return while both bonds and T-Bills did due to high inflation at certain times. Through all this time period, stocks earned an average compound real 6.5% total return following a trend line where some years of deviation above or below meant going the other direction eventually.

It is possible to slice and dice the data differently, for example by starting and ending in a month/year combination (see the IFA Index Calculator and pick S&P 500 in the IFA Index drop-down menu of box 1) rather than the calendar year ends that Siegel uses. Unfortunately IFA doesn't have bond and T-Bill data. But it does have S&P 500 through the financial crisis data up to 2013. The numbers for time periods will vary but the same patterns emerge. An investor in the S&P 500 who had bought 15 years before in 1984 and sold out in panic at the bottom of the credit crisis in March 2009 would still have realized a 3.33% annual compound return. 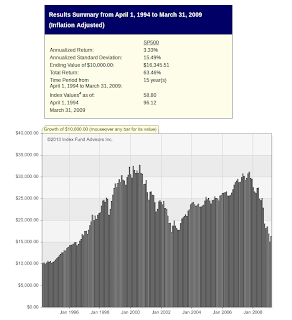 Start in 2008 and end in March 2013 through the lost decade of the 2000s and the investor would have realized a puny but positive 1.79% compound annual return.

The big questions regarding this argument:

More risky (Bodie, Samuelson, Shiller)
Justification #1: The spread of possible ending dollar values gets wider, not narrower, with time. Though the probability of loss may decline and the possible range of rates of return may lessen, the effects of compounding over longer time periods means that the investor faces a broadening fan of ending total dollars accumulated. In the more technical language of a popularized explanation by Northwestern University professor John Norstad, "The standard deviation of the total continuously compounded returns increases in proportion to the square root of the time horizon. Thus, for example, a 16 year investment is 4 times as uncertain as a 1 year investment if we measure "uncertainty" as standard deviation of continuously compounded total return". The theoretical chart he posts is this: 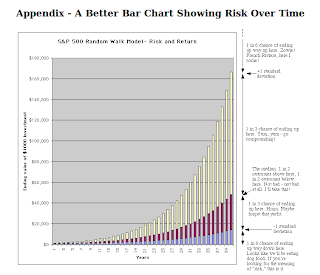 ... and a chart published by FinaMetrica from the real world of the widening spread up to 120 months/10 years holding period in Australian stocks (which over the long term bested the USA compound stock returns). Note that after ten years the worst outcome would have seen a real loss, though the amount lessened progressively from 24 through 120 months holding period just like Siegel's US chart.

So the argument is that if stocks behave as they have in the past, stocks are "risky" because holding on for 15+ years means a widening difference between a more and more decent amount of money and filthy to obscenely rich.

Justification #2: Stocks may have lengthy episodes of underperforming bonds or T-Bills. It's true and we have just lived through such a period. The Credit Suisse Yearbook tells us that for the 12 years between 2000 and 2012 in Canada, the TSX underperformed long term government bonds by 3.2% real return annually. However, the TSX did provide a 3.4% positive return per year. Again, it's a case of well off vs really well off. If possibly not keeping up with the Joneses is your measure of a bad outcome, then stocks are indeed risky.

We also note, that starting at ten years holding period, in the chart from Siegel the worst return of stocks at -4.1% turned out better than the worst return of both bonds (long term US government bonds) at -5.4% and US Treasury T-Bills at -5.1%. An investor lost less money with stocks than supposedly safe T-Bills.

Justification #3: The distribution of possible stock values from year to year varies more and more the longer the holding period. The idea here is that market declines any time during the holding period, not just at the end, may matter. Mark Kritzman has highlighted the fact that the longer you are in the market the more likely your are to be exposed at some point to bigger negative returns. Volatility will manifest itself. He says it matters for institutional investors like foundations whose spending is limited by account value thresholds, financial institutions with reserve requirements or hedge funds with margin limits, or for a homeowner whose mortgage requires him/her to maintain a certain net worth.

A corollary is that your actual holding period may be a lot shorter than the intended holding period. You may panic and sell out much earlier than intended. Apparently, research firm Dalbar has found that the average fund holding period of US investors is only 2.5 years (cited by Jack Duval in The Myth of Time Diversification), which is much less than the 15 to 20 years it took historically to always get a positive return from stocks. As the comic strip Pogo long ago said, "we have met the enemy and he is us". Other bad events that could shorten actual holding period like health problems, job loss, unexpected early retirement, disability mentioned by Duval are challenges that we feel should be addressed by insurance, emergency funds or shorter terms assets like GICs. If your risk tolerance and your risk capacity, or your risk need, are not suited to it, you shouldn't own much stocks.

Justification #4: Famous finance professor theorists tell us so. Paul Samuelson (see summary explanation without the math in Duval's paper) uses utility theory and the possible growing magnitude of loss to come to the conclusion that merely increasing time horizon does not justify an increased portfolio allocation to stocks. The crux of the matter is the same as in Justification #1 - is it possible that stocks will deliver a lengthy string of negative returns creating bigger and bigger losses the longer the holding period, instead of what has happened historically as Siegel documents?

Zvi Bodie used option pricing theory to prove in the paper On the Risk of Stocks in the Long Run, that the risk of stocks increases with time because the cost of insuring against earning less than the risk-free rate goes up with time. There are no options on any stock index extending out to 15 or 20 years that would back up the theory with fact, though there is some evidence with LEAPS going out up to three years that the option price does increase for a longer term. This paper is widely cited and for most seems to be the definitive statement though British actuary David Wilkie, musters plenty of math as he disagrees - "Bodie's conclusion is unambiguously wrong". To perplex us all, Wilkie instead concludes that "The risk of stocks may increase with term, or fall, or rise and fall, or fall and rise, depending on the form of the guarantee and the measure chosen to represent risk".

So there it is, the various arguments for why stocks might be more or less risky in the long run. Take your pick. The situation reminds us of that long past TV commercial now on YouTube which debated whether Certs is a candy mint or a breath mint.

Bottom Line: We believe the proposition that investing in stocks does pay off in the long run. We are optimists, as professors Elroy Dimson, Paul Marsh and Mike Staunton painted the dominance of equities worldwide over more than a hundred years in Triumph of the Optimists. However, we think it worthwhile to be cautious and not to invest exclusively in stocks even with a time horizon of decades. Fixed income and cash-like investments make sense for near term spending or if our time horizon gets shortened unexpectedly. Other asset classes also work well in a portfolio to take advantage of rebalancing when they respond differently to varying economic conditions. Diversifying beyond Canadian and US stocks makes sense too.

Disclosure: At the moment, this blogger's portfolio is about 65% invested in stocks and stock ETFs worldwide.

Disclaimer: This post is my opinion only and should not be construed as investment advice. Readers should be aware that the above comparisons are not an investment recommendation. They rest on other sources, whose accuracy is not guaranteed and the article may not interpret such results correctly. Do your homework before making any decisions and consider consulting a professional advisor.
Posted by CanadianInvestor at 17:32