Forget gold. Laugh if you wish but wine and whisky can also be considered an investment. In The Price of Wine, professors Elroy Dimson, Peter Rousseau and Christophe Spaenjers recently discovered that top grade French wines (Haut-Brion, Lafite-Rothschild, Latour, Margaux, and Mouton-Rothschild) outperformed government bonds with annualized real returns of 4.1% between 1900 and 2012 as the chart below from the paper shows. 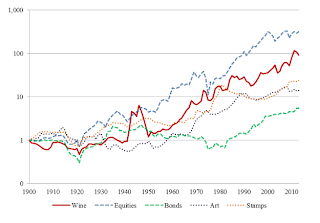 The wine didn't do as well as British equities on a straight financial basis but it seems that there is a non-financial "psychic return" of at least 1% from the pleasure of owning wines. What stock could possibly give the same fun as owning a rare famous vintage?

Note their finding that the highest rates of appreciation were for young high-quality wines that are still maturing. There are plenty of easily-found online websites selling such wines whose prices range upwards from thousands of dollars a bottle. Or we could do like Chinese billionaires who are apparently snapping up whole French chateau vineyards.

Whisky is well on its way to emulating wine as an investment. The single malts of Scotland, produced in limited quantities and flavoured in subtle ways un-reproducible anywhere else in the world have been growing in popularity by leaps and bounds according to the BBC. The very rare and very old bottlings can command enormous prices - witness the record-breaking bottle of Macallan 64 year old, yes ONE bottle, that sold in 2010 for $460,000 US dollars ($490,000 Canadian dollars). That's more than a famously expensive share of Warren Buffett's Berkshire Hathaway stock. It's liquid gold indeed.

The Current Record Holder - Macallan 64 in a Lalique crystal decanter 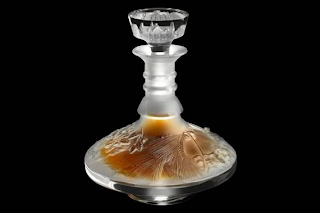 It's now possible to find mainstream media articles on the best whiskies to buy as an investment, such as this one from Huffington Post. There are even indices of "investment grade scotch", some of them strongly upward sloping, but others showing losses. Popularity and price can be fickle. Another article asks whether the boom can continue. Of course, apart from the usual investment risks, wine and whisky face a very special risk, chillingly demonstrated in this YouTube video about a special bottling apparently owned by none other than Prince William.

Disclosure: This blogger owns several bottles of fine wine and single malt whisky, though they all succumb to that other behavioural investment risk, consuming the profits.

Disclaimer: this post is my opinion only and should not be construed as investment advice. Readers should be aware that the above comparisons are not an investment recommendation. They rest on other sources, whose accuracy is not guaranteed and the article may not interpret such results correctly. Do your homework before making any decisions and consider consulting a professional advisor.
Posted by CanadianInvestor at 19:12