Top-100 Canadian CEOs Update: Who is the most Over-Paid?

The Canadian Centre for Policy Alternatives' Hugh Mackenzie has come out with All in a Day's Work? (CEO Pay in Canada) which shows how much the best paid 100 CEOs of Canada's biggest public companies received in 2012. There is no doubt every one of them was paid a lot, but for the investor, whether that was too much or too little depends on how the company has done for the investor. The report doesn't address that issue so this week, we'll look at those companies who we think have over-paid, those combining Top-100 pay with poor returns. We'll also take a look at the fate of companies that were on our previous list two years ago of the most Over-Paid CEOs.

The Eleven Losers - lousy investor bang for CEO bucks
As can be seen in the table below from GlobeInvestor's WatchList, the stock and company performance numbers don't come anywhere near to matching up with the Top-100 pay of their CEOs. Poor total stock returns along with operating or net losses, no dividend growth, low or negative Return on Equity suggest strongly that the CEO did not earn his, or in the case of TransAlta her, high pay.

The most egregious transgressor has to be Niko Resources (TSX symbol: NKO). While CEO Edward Sampson has been getting rich, investors have been getting poor. Most galling and surprising, Sampson and Niko were also in the most over-paid list two years ago. Niko's latest quarterly income statements on TMX Money show no sign of improvement. Why analysts would even give this stock as much as a Hold rating mystifies us. The stock has followed a steady downward path for years now as the Yahoo Finance chart below shows. 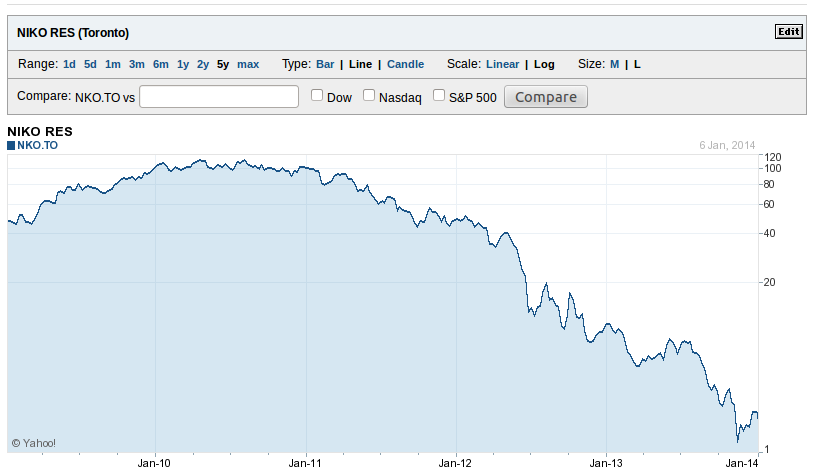 Blackberry's (TSX: BB, formerly Research in Motion, which is what appears in the Mackenzie report, though the name change hasn't helped the reality) slide has been a painful public spectacle, painful, to be precise, for investors, but not the 2012 CEO Thorsten Heins. Is the high CEO pay compensation for having to endure the frustration of inability to turn the company around? Heins probably did not get all the $10.2 million in 2012 pay since his $9.5 million award in stock would have gone down too. But his 2013 pay will show handsome recompense as he was given a $22 million settlement when he was fired in November. Looks like a classic "heads, I (CEO Heins) win, tails, you (investors) lose".

The gold stock slump has hit a number of companies in our most over-paid list. Some show bad business performance while others are faring better. Barrick Gold Corp, Turquoise Hill Resources, Goldcorp Inc, Detour Gold and Kinross Gold are uniformly bad - poor stock performance and money-losing business results. Agnico-Eagle Mines and Eldorado Gold have experienced lower profits but they are still profitable. The two companies were among the miners who looked like stronger bets in our recent review.

Similarly, EnCana and TransAlta have gone through slumping business income while remaining profitable. Nevertheless, it sure looks like these CEOs, by remaining in the Top 100, are being paid primarily for the size of their empire instead of results.

Though not in our table, another CEO who received far too much in 2012 is Benoit La Salle of gold miner Semafo, whose $4.0 million included a special payment of $3.0 million, which appears to be a good-bye bonus, when he stepped down as CEO in August 2012. That was just before the ensuing series of quarterly results have reported unrelenting large losses.

The 2012 Over-Paid - How things sort themselves out over time
Two years on, the formerly over-paid have mostly found their proper place in a couple of ways:

1) Falling pay drops CEO out of Top-100 - Yellow Media, Nordion, Air Canada and Cott have all reduced their CEO's pay in absolute terms and relative to other companies. For example, Nordion CEO Steven West's pay of $1.2 million in 2012 is much saner than the $13.1 million handed over to the previous CEO in 2010. Interestingly, its stock has done very well in the past year too. Less pay equals better performance?

2) Better company and stock performance - Cameco, Manulife, Sun Life and Magna have all improved since 2010 so that the balance of pay with results is much less out of whack.

Perhaps RONA will attain this status if new CEO Robert Sawyer (since November 2012) does a better job than Robert Dutton, who received a severance package of $4.5 million. There have been big quarterly losses until the most recent quarter along with much restructuring. We won't know how much Sawyer is paid until the Proxy Circular for the next annual meeting is issued around the end of March. Or perhaps RONA will fall into the next category.

3) Still way over-paid - To Niko, we add Sherritt, the shrinking mining company. Sherritt CEO David Pathe's $2.7 million pay in 2012 puts him a fair distance below the #100 spot's pay of $3.8 million and well below former CEO Ian Delaney's $4.2 million 2010 pay. However, the company is now losing money and having to shed assets.

Outlandish CEO pay can be a warning sign for investors as an indicator of a company run by the managers for the managers and not by the Board for the shareholders. It's another tool in the analysis toolbox.

Disclaimer: This post is my opinion only and should not be construed as investment advice. Readers should be aware that the above comparisons are not an investment recommendation. They rest on other sources, whose accuracy is not guaranteed and the article may not interpret such results correctly. Do your homework before making any decisions and consider consulting a professional advisor.
Posted by CanadianInvestor at 06:19