Picking Countries with a Weak Currency - How did it perform?

About a year ago in Using Weak Currencies to Find Foreign Equity Investment Opportunity, we wrote about research findings that found that equities in countries which had experienced prolonged weakness in their currency subsequently performed much better than the average. We dug up the data and identified seven individual countries and the Euro area, all of whose currencies had taken a battering. Let's now see what happened. Did those countries' equity equity markets do well for a Canadian investor?

The Eight Weak Currency Countries of Last Year - Win big or lose big
Last year's post listed available ETFs for each country and the Euro area, so we simply went to the ETF provider's website to get the return performance. Then we adjusted the return for the fact that since many of the ETFs trade in US dollars on US exchanges, the fall in value of the Canadian dollar (CAD) against the US dollar (USD) boosted results for a Canadian investor (i.e. each USD bought more and more CAD over the year). In fact, the USD went from buying $1.0285 CAD to $1.1065 between 1st March 2013 and 28th February 2014, a 7.58% rise, which is what we added to the returns for each of the US quoted ETFs.

That's an outstanding return, far ahead of a benchmark such as one for all non-North American developed countries, which happens to have a heavy loading of Euro holdings, the EAFE (Europe, Australia, Asia and the Far East) ETF from iShares Canada, iShares MSCI EAFE IMI Index ETF (TSX symbol: XEM). XEM's return was also outstanding but considerably less at +29.3%.

2) Denmark:
That's amazing return (imagine the TSX rising that much in a year!) and far better than the EAFE benchmark.

3) India:
These slightly different funds gave slightly different results. However, it is worth noting that the total return of the Canadian quoted funds, taken directly from the provider website, ended up in the same ballpark, after the CAD vs USD return is taken into account, as for the US-quoted INDY, whose USD return was -2.47% before the currency return was added. This demonstrates what we have noted before - that the currency change that matters is not the USD in which the ETF is traded but the shift between CAD the relevant country currency.

Note also that this positive return handily exceeds the return from the average of Emerging market countries in a benchmark fund such as the iShares MSCI Emerging Markets ETF (NYSE: EEM), whose total return was +1.0%.

4) Brazil:
This is far worse than the EEM benchmark.

5) Indonesia:
This is also far worse than the EEM benchmark.

And another EEM benchmark beater.

8) Turkey:
This is another massive under-performer of the EEM benchmark. 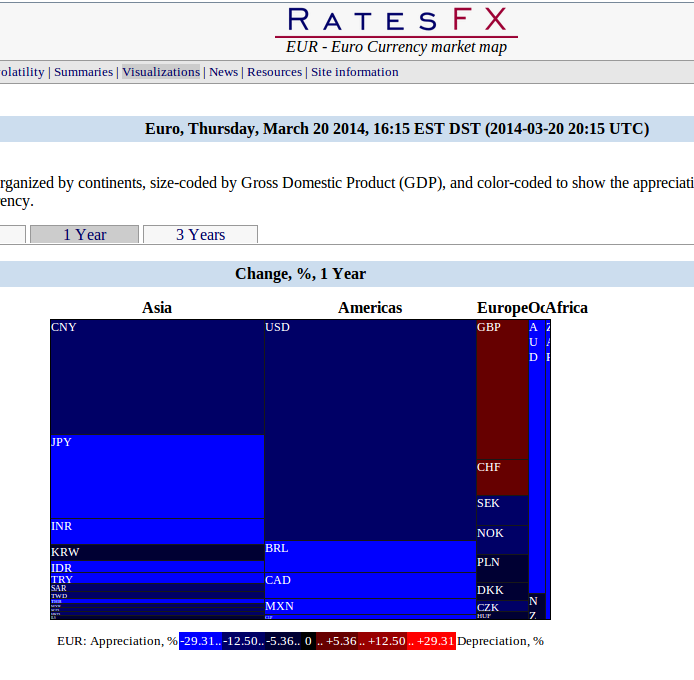 India and South Africa's currencies had strong bright red depreciation with modest though benchmark-exceeding returns. Last year they evidently hadn't yet hit the bottom of the currency path. Maybe the strong returns are to come.

The latest weak currency countries
Going through the same scan of the latest three-year currency performance on RatesFX, the countries with the telltale red of depreciation are:

1) Japan - Performance of Japanese equities was excellent in the 12 months ending February 28th, aided by the weak currency for a Canadian investor - up 21.3% in the iShares MSCI Japan ETF (NYSE: EWJ). Perhaps after many years of stagnation, market returns will remain positive. The Credit Suisse study we cited last year found that superior equity returns subsequent to currency weakness could persist for years. The valuation metrics on EWJ's webpage are moderately attractive - a fairly high Price/Earnings of 19.3 and a low Price/Book of 1.7.

Other ETFs to invest in Japanese equities, all traded on US stock markets, are listed in the ETFdb. There is only one unleveraged Japan-only equity traded in Canada, the iShares Japan Fundamental Index Fund (CJP), which is CAD-hedged, a feature that isolates market moves from currency moves in the short term, though it does impose a significant drag on returns in the long term, as we discussed in this post.

2) Chile - The equity market, as tracked by the iShares MSCI Chile Capped ETF (NYSE: ECH), did very poorly in the last twelve months, returning a huge decline of 25.2% for a Canadian investor. EWJ's valuation metrics are only somewhat appealing with a high P/E of 22.8 and a low P/B of 2.0.

3) Canada! - Except for other countries, several noted above, whose currencies are even weaker, the CAD has a weak track 3-year record against all major currencies (chart below). Choices of ETFs to invest in Canadian equity are many - see our reviews of Canadian large cap equity ETFs and a comparison of Canadian low-volatility with cap-weight ETFs. 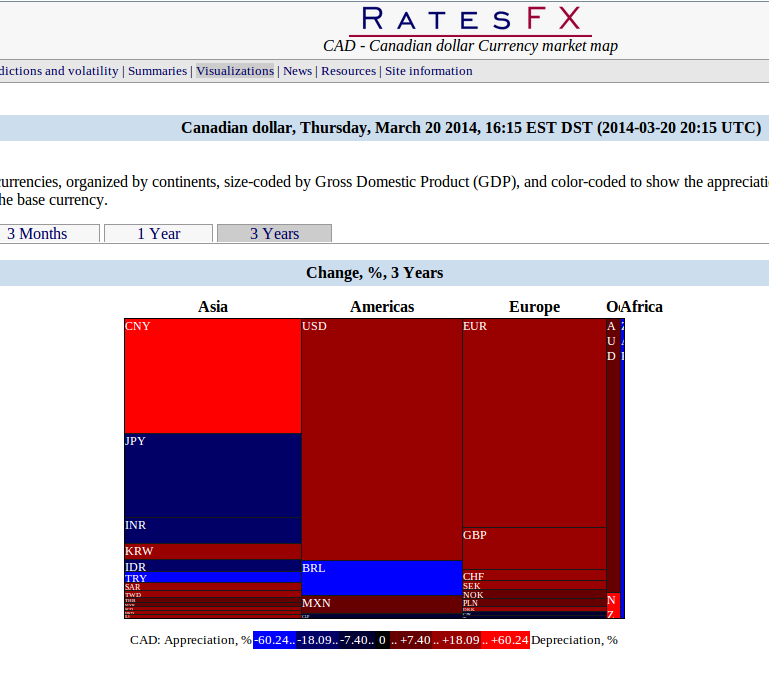 Valuation metrics of the Canadian equity benchmark iShares S&P/TSX Capped Composite Index Fund (TSX: XIC) are quite reasonable - a P/E of 16.6 and P/B of 2.0. Perhaps good returns are in the offing for investors in Canada's equity market.

Bottom line: Like all long term statistical relationships determined across many countries and multiple years, the one where weak currency presages stronger equity equity returns doesn't work without fail in every instance and it hasn't worked in the past year for every currency/country, only a majority of five out of eight. It also seems to be a "win big or lose big" proposition.

As for implementing a strategy to exploit the weak currency phenomenon, our post last year noted what we think are steps in a prudent approach. In addition,To adopt such a strategy is probably not for everyone. The best option for most investors who don't wish to take the time and trouble to track, then buy and sell the individual country holdings, is to invest in a few broad index funds like the benchmarks above (or the best in each category - see our comparisons of Emerging Market equity ETFs and diversified Developed Country ETFs).

Disclaimer: This post is my opinion only and should not be construed as investment advice. Readers should be aware that the above comparisons are not an investment recommendation. They rest on other sources, whose accuracy is not guaranteed and the article may not interpret such results correctly. Do your homework before making any decisions and consider consulting a professional advisor.
Posted by CanadianInvestor at 16:08