Some investors, especially those in high income brackets or those who save a lot, may have run out of RRSP and TFSA room, yet still want or need (e.g. because of a target asset allocation) to hold interest-paying fixed income in a non-registered taxable account. What are the options for such investments and how do they compare? A prime consideration is naturally after-tax income - which gives the best return after-tax and how much difference do the options generate? How do the options compare regarding other factors such as credit risk and interest rate risk and ease of portfolio management?

A couple of new ETFs - BMO's discount bond fund and First Asset's strip bond fund
A brand new ETF entered the scene just a few weeks ago, the BMO Discount Bond Index ETF (TSX symbol: ZDB). It holds a basket of high quality investment grade bonds whose key differentiating characteristic is a discount price to par value. That means return is partly capital gains as the bonds return to par value at maturity. On the web page of ZDB, the fact that the weighted average (of the holdings) coupon rate currently at 2.34% is less than the weighted average yield to maturity of 2.5% tells us so. (Note: The latter number is not yet posted on the fund's webpage, though the ETF's fund profile contains the 2.5% figure. BMO says the number will be posted and updated daily after the fund makes its first distribution on March 6.)

Back in June 2013, First Asset launched the First Asset DEX 1-5 Year Laddered Government Strip Bond Index ETF (BXF). It holds a basket of coupons and residuals that pay no interest; they only pay their principal back at maturity. Taxes are levied annually on the annual yield of each coupon or residual as if it were interest. The way the implicit interest is calculated and tax reported on an accruing rising basis (see TaxTips.ca explanation and example here) there is some tax efficiency in that more of the interest is reported in later years. BXF is thus a bit more tax efficient than a GIC. But it does not defer tax or pay out part of its return as lower-taxed capital gains. BXF primarily avoids the big problem today, that the vast majority of bonds are premium bonds that pay out more in interest coupons than the yield.  Canadian Couch Potato recently posted a good explanation of the discount bond benefit for taxable accounts and a review of ZDB, with links back to a previous post on BXF.

Bad Effects of Premium Bonds and Good Effects of Discount Bonds in a Taxable Account
We've taken a mix of a high interst savings account, GICs with terms ranging from one to ten years, individual bonds, the two ETFs mentioned above and as a benchmark, the iShares DEX Universe Bond Index Fund (XBB). Our comparison table below shows the results, before tax, such as would be achieved holding such investments in a registered account, and after-tax in a taxable account. 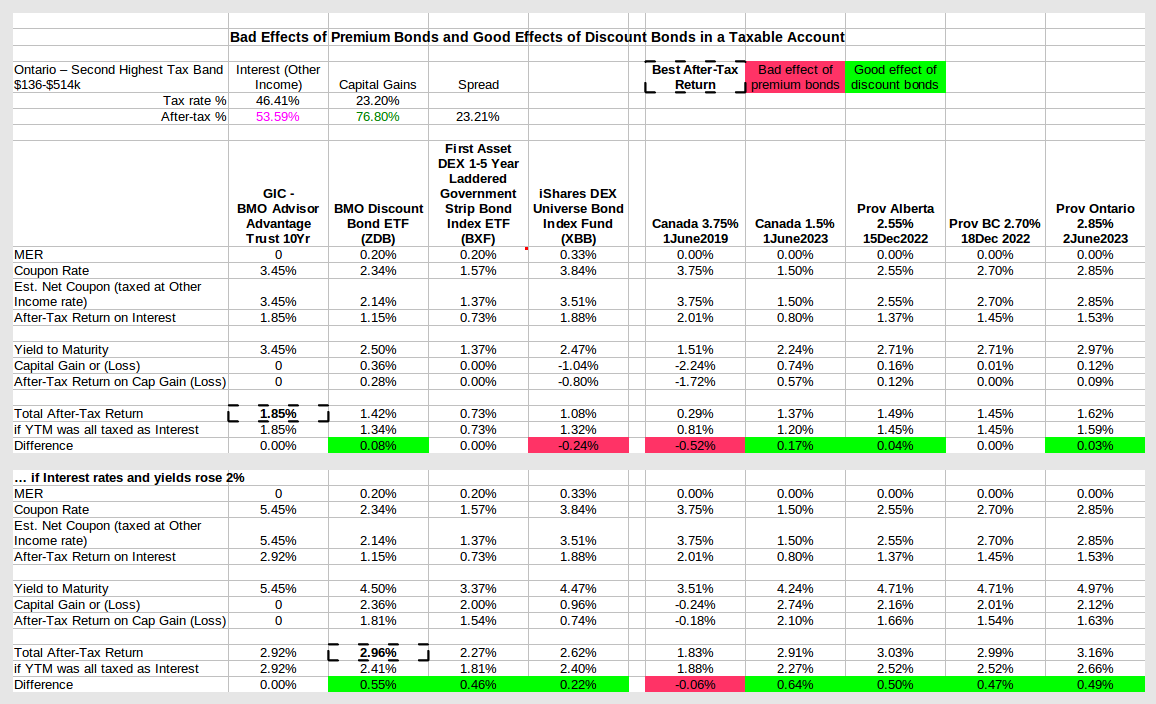 Discount bonds help mostly by avoiding the premium bond penalty
ZDB and the individual discount bonds save only a little on tax compared to what the investor would pay if all the return was taxed at the rate of ordinary interest income. The green highlighted cells show a benefit of 0.04% to 0.17% extra return - not much. In contrast the benchmark XBB, which contains a preponderance of premium bonds, suffers a bigger 0.24% return penalty and one highly premium bond, the Canada 1 June 2019 maturity paying a 3.75% coupon and only yielding 1.51%, suffers even more.

Things would change if interest rates rose appreciably
It doesn't look as though interest rates in Canada are poised to rise anytime soon (2015 at the earliest, per the Bank of Canada) but if they did rise by 2% tomorrow, the advantage would shift strongly to discount bonds, as the lower half of the table shows. The ETF holdings don't change, so the coupon rate would stay quite stable in the immediate term (as we discussed in our review of XBB in a climate of rising interest rates). But the 2% risein required yield would mean that many premium bonds' falling price would make them discount bonds. XBB itself would become a discount bond fund. ZDB would even beat out after tax a GIC whose rate had gone up 2% to 5.45%.

BXF would shed its discount bond advantage much more quickly than ZDB and XBB since it only has a five year ladder and replaces about one fifth of its holdings every year, while the other two ETFs hold a vast range of bond maturities and they replace a much smaller proportion of their holdings annually. The more strongly interest rates / required yields rise, the more discount bonds there will be around and the bigger the discount, giving ZDB an increasing attractiveness.

Benefits of discount bonds vary a lot by Province
The relatively low taxation of interest in Alberta and Nunavut means that residents of those Provinces will gain much less from discount bonds than the highly-taxed residents of Quebec and Nova Scotia. 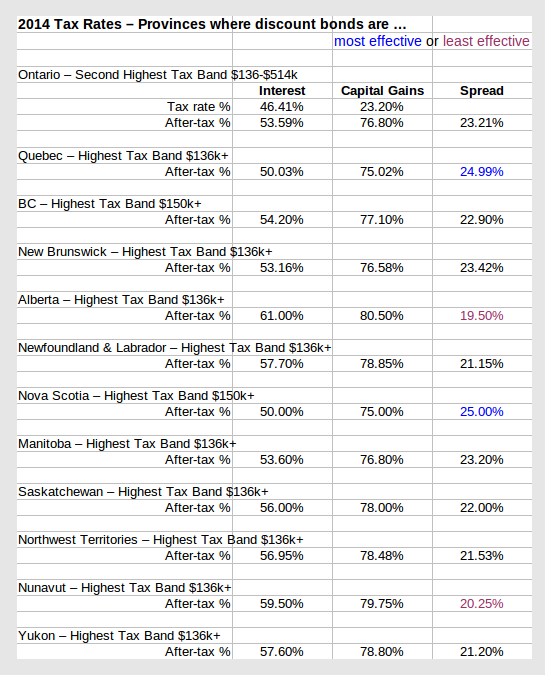 After-Tax Returns not very good - most options can't beat inflation
At any maturity, our summary table of all the results shows that the best quality credit risk fixed income options provide weak returns - in most cases not even beating the latest low inflation rate of 1.5%. Only a couple of GICs do so along with one Province of Ontario bond. 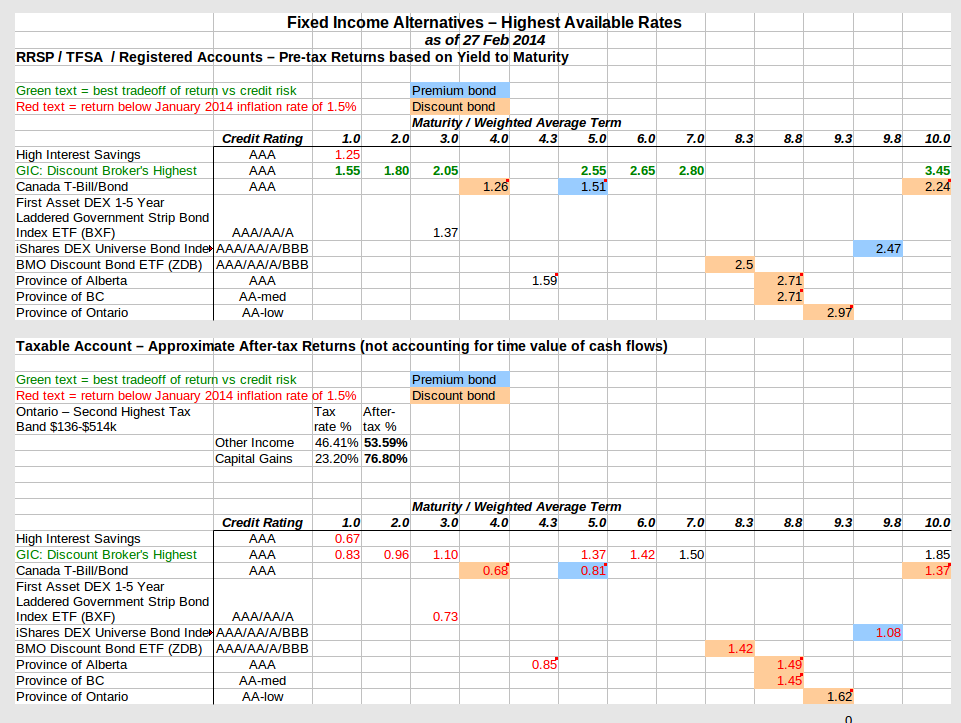 The GIC beats them all after tax
From the 1-year GIC on up to the 10-year GIC paying 3.45% interest, each has an appreciably higher return after-tax than any other option with comparable maturity. That's considering pure return only but there might be other reasons an investor might need or want to pick a fund instead of using GICs in a ladder.

Other considerations - GIC vs a discount bond fund

Bottom Line - Discount bonds help boost after-tax returns in taxable accounts though GICs produce higher returns at the moment. In addition, the discount bond benefit is not very pronounced right now but the more interest rates rise, the greater will be the effect, especially in higher tax Provinces. ZDB will provide stronger benefits to taxable investors than BXF.

PS Thanks to reader sleepydoc for suggesting the topic.

Disclaimer: This post is my opinion only and should not be construed as investment advice. Readers should be aware that the above comparisons are not an investment recommendation. They rest on other sources, whose accuracy is not guaranteed and the article may not interpret such results correctly. Do your homework before making any decisions and consider consulting a professional advisor.
Posted by CanadianInvestor at 11:30

Excellent analysis once again, thank you ! I've been looking for that kind of information but couldn't find anything near the quality of what you did. Greatly appreciated.

Top notch analysis, new money is being put in ZDB !

CanadianInvestor
Late-60s Canadian who has been managing own investments for about eighteen years in taxable accounts. RRSPs, RESPs, LIRAs, trust accounts. Personal finance blogger since early 2007. Former career in government and corporations with a long-ago MBA.