Last week's post showed the past success of the Permanent Portfolio (PP), in which only four holdings - a domestic broad stock index fund, long term government bonds, cash or a money market fund and gold bullion - are combined in equal 25% amounts that are annually rebalanced. This week we look inside the workings of the PP to see what has driven that success and why that may well continue.

Consistent low correlation of returns
The single most influential and persistent quality of the PP's construction is that it holds four assets that have consistently worked out of sync with each other. In technical jargon they have had consistently low and sometimes even negative correlation of their returns. A visual impression of this is in the Stingy Investor Periodic Table of Annual Returns for the four holdings. Below are screenshots for annual real returns, which includes a reduction for the year's inflation and another to estimate ETF-level fees, in successive periods starting 1970, 1981, 1992 and 2003. The best performing holding changes frequently, and often dramatically from worst to best or vice versa. Even steady plodding T-Bills sometimes offered the highest return in a year. Not once in all 44 years does every holding lose money - at least one is up though the others are down, such as in 2013, where the positive TSX Composite return was not enough to offset losses amongst the three other holdings.

Putting the same data along with the overall portfolio return onto one graph below shows the often wild swings of the individual holdings result in a much more stable net portfolio result (the red line) year by year. 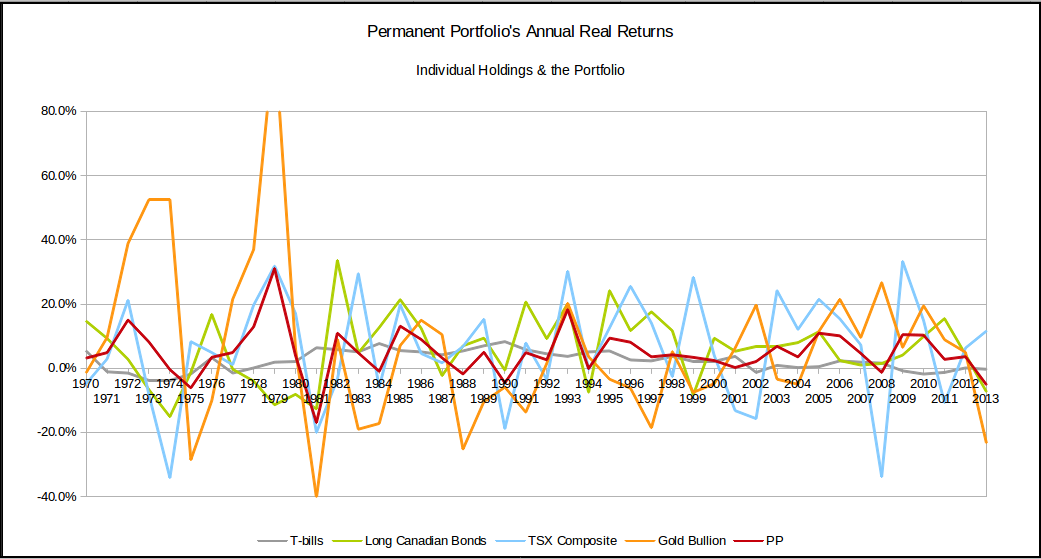 The way to measure the zigging vs zagging behaviour of the holdings against each other is a statistic called correlation. A correlation of +1.0 between any two assets means they always move in perfect lockstep i.e. in the same direction (though not necessarily by the same amount) while a correlation of -1.0 would mean they always move in opposite directions. The lower the number towards -1.0 the better and the higher the number towards +1.0 the less of the so-called diversification benefit there is. In practice, any correlation amongst available investment asset classes that ranges from slightly negative to around +0.2 is considered excellent. (See our previous post on how different correlation numbers can dramatically change the volatility of a portfolio)

Here's the good news about the PP. William Coaker, senior managing director of equity investments at the University of California, studied the variability of correlations of many asset classes in different time periods in this paper and then in this paper. He did indeed find lots of undesirable changes and instability in correlations. But he also found - see his table Correlation Matrix for 20 Asset Classes during Five Time Periods - that some asset classes exhibited consistent low correlations through thick and thin. Especially good together were the four of the PP - US Treasuries (aka cash), US bonds (as close as we could match to long term US government bonds), gold and S&P 500 (aka US equity). The highest average correlation of any holding with any other of the four over the whole time period 1970 to 2009 was only 0.37 (Treasuries with Bonds). More importantly, through several sub-periods of the 2000s, the highest correlation of all was 0.49 between Gold and Bonds during the 2007-2009 financial crisis (when both provided positive returns offsetting hugely negative equity returns as we can see in the above tables). Every other sub-period for all other correlation combinations, the correlations remained solidly in the best / lowest category of below 0.4. That's what has made the PP so good. The logic of the PP and its strategy to own assets that correspond  and respond to the different economic environments of prosperity, recession, inflation and deflation is supported by the consistently low correlations.

Will low correlations continue?
As long as the PP's four holdings maintain their low correlation, it will be a very effective portfolio. Will they? Of course, it's impossible to tell with certainty but the 44 year history above gives a fair dollop of support to answering yes they will.

The other question many investors would have is about the possibility of continuing the experience of 2013's negative returns, where a small rise in interest rates in mid-year hurt bond returns while remaining so low that T-Bills / cash yielded less than inflation. Most would have confidence in equities when economic growth has renewed. The big question is around gold, which few model mainstream portfolios hold in such large amounts. It's not an income-producing asset but rather a commodity whose long term returns only match inflation. It's principal portfolio role as an insurance policy against very high-inflation and extreme crises means that at other times its price behaviour might be in sync with the other holdings and not provide diversification. In the past that behaviour of being in sync on the downside seems not to have lasted very long. As it happens, gold seems to be recovering in 2014 after a big dip in 2013 as this chart from the World Gold Council shows.

Bottom line: As we delve into it the PP looks more credible and solid. It's still a big departure from the mainstream.

Disclaimer: This post is my opinion only and should not be construed as investment advice. Readers should be aware that the above comparisons are not an investment recommendation. They rest on other sources, whose accuracy is not guaranteed and the article may not interpret such results correctly. Do your homework before making any decisions and consider consulting a professional advisor.
Posted by CanadianInvestor at 17:58