The Permanent Portfolio: Pros and Cons for Canadian Savers and Retirees

Harry Browne's Permanent Portfolio (PP) idea, as explained in his book Fail-Safe Investing: Lifelong Financial Security in 30 Minutes, has been around for over three decades. Though he passed away in 2006 his ideas still influence many investors. It is a portfolio strategy with much appeal.

First, it has achieved excellent returns, a 9.6% annual before-inflation compound growth rate with very few years of losses, and fairly small losses at that, according to stats on present-day acolyte Craig Rowlands' Crawling Road blog.

Second, PP is dead simple to implement and maintain quite cheaply with ETFs - only four holdings - cash (government T-Bills or money market funds), long term federal government bonds, domestic equities and physical gold - that need rebalancing trades once a year back to an equal 25% allocation.

Third, it is based on an intuitive logic, that it's goal is to withstand the four major economic conditions - prosperity, recession, inflation and deflation by the choice of the four asset types which counterbalance and complement each other by having at least one do well while other(s) do poorly. It's a similar idea to the possible range of economic conditions driving the portfolio structure we described last year in New Improved Model Portfolio: the Smart Beta. Though growth of the portfolio is an objective, even more important is the goal to preserve wealth.

This latter idea of protecting against the downside makes the strategy, if it works, especially appealing to retirees who do not want their withdrawals during negative market events or economic phases to irreversibly wipe out capital. We'll examine the PP both for a retiree withdrawing some money every year and for a person in the savings accumulation phase of life, i.e. not withdrawing any money.

Testing required - Is Canada the same?
But the USA is not Canada, things might not work the same, especially since the US dollar is a safe haven currency. When the the 2008 crisis hit, the Canadian dollar got hammered. Did that matter? Would a Canadian have achieved lower volatility and a minimum of mild down years?

For an approximate answer, we turned to a favorite free tool, Stingy Investor's Asset Mixer. We can get roughly the asset classes for a Canadian version, i.e. using Canadian investments, of the Permanent Portfolio. We can even apply MER-like fees, in the form of negative "alpha" in the tool, at ETF levels in this test, to make results more realistic. The data goes back 44 years to 1970 and forward to 2013, so we get coverage through the nastiness of the high inflation 1970s, many recessions and growth periods, and various market crises, including the latest one, the 2008 financial crisis. The main misalignment is that the Asset Mixer uses an index of corporate plus government bonds, whereas the PP includes only government bonds. This matters when, for instance, the financial crisis hit in 2008 and government bonds held up while corporate bonds plunged. We compared results to an ultra-simple conservative Benchmark portfolio - 60% Long Canadian bonds and 40% TSX Composite Index Canadian equity.

Results
Scenario: Retired investor withdrawing 4.5% per year on a $100,000 starting value in 1970 (screenshots of Asset Mixer output below) 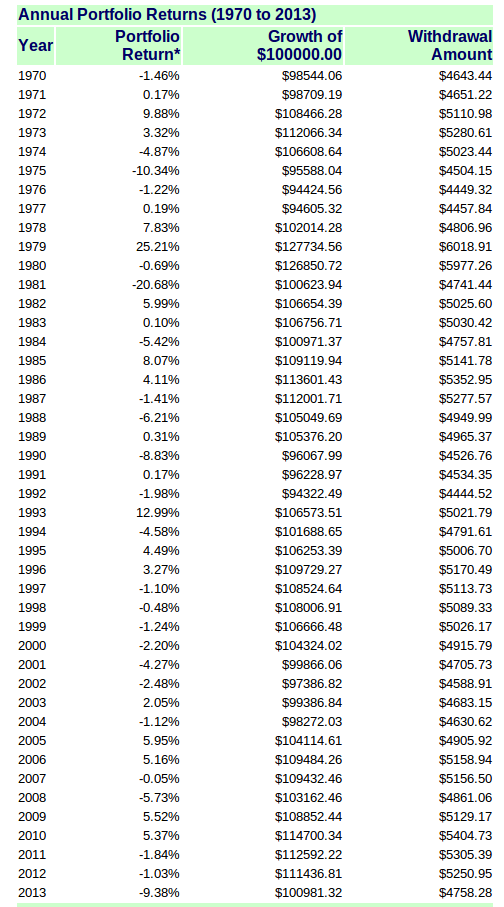 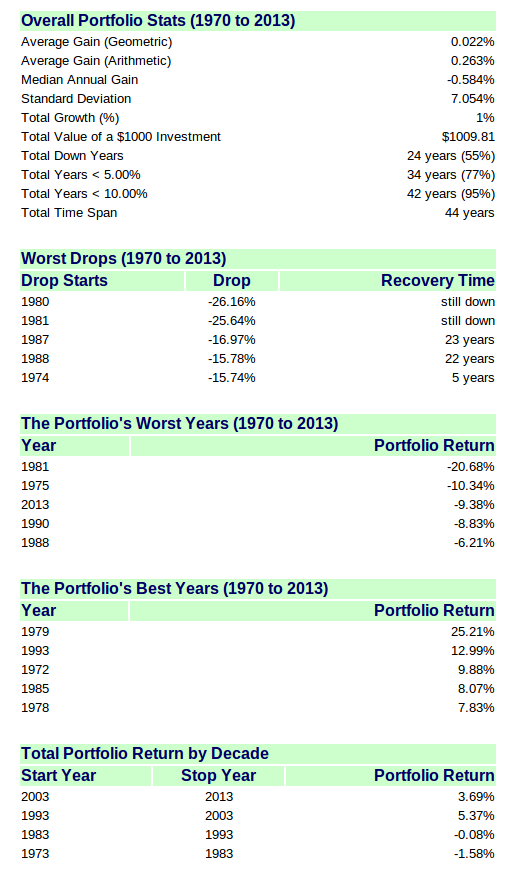 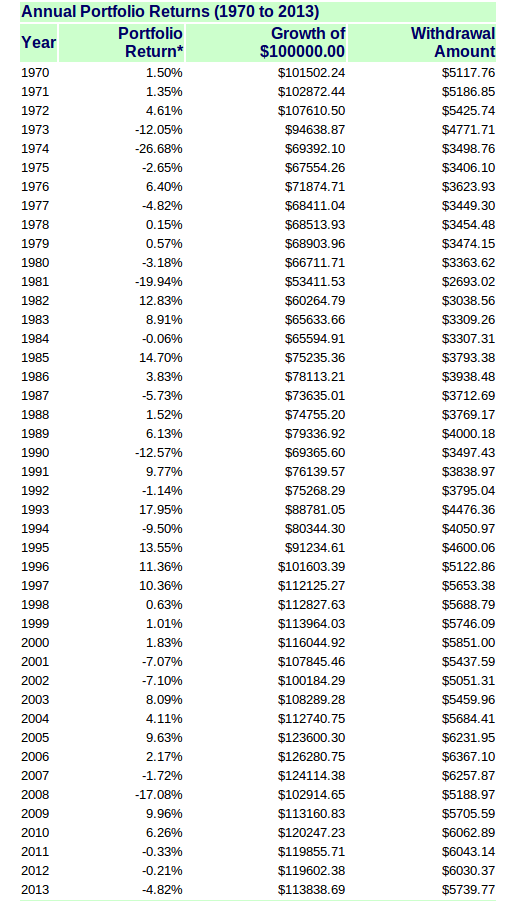 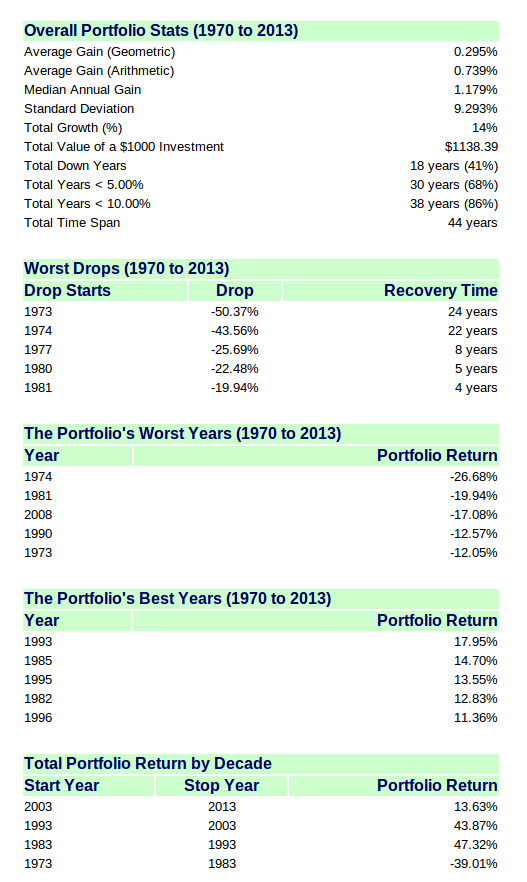 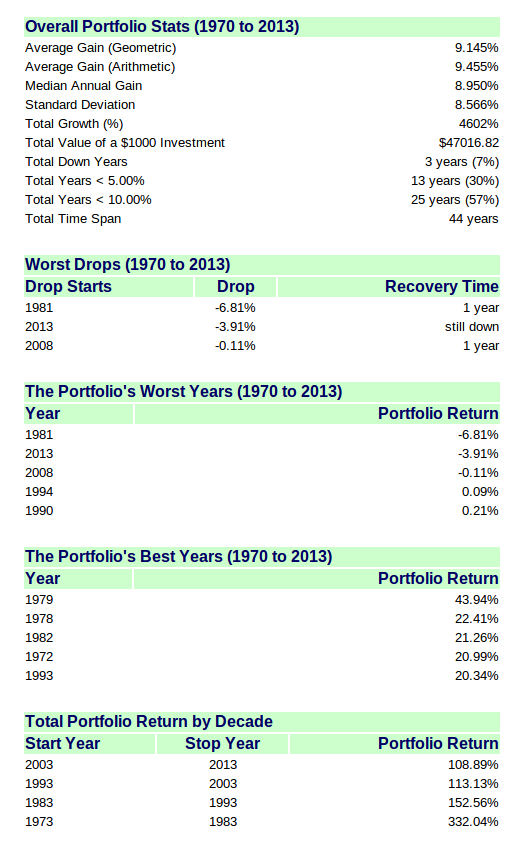 ETFs to implement a Canadian Permanent Portfolio
Here is the lowest MER cost way to implement a PP in Canada:
Bottom Line: Almost surely, the PP will make investors, including this blogger, uncomfortable since it is a marked departure, especially with the high weighting to volatile gold, from mainstream finance and most standard portfolio allocations to the various asset classes. It seems to have worked and its logic in holding assets that respond to different economic environments, makes intuitive sense. There is still the question as to whether it will continue to work in future - is the limited number of assets sufficient to deal with all potential future circumstances, particularly new types of crises? It's hard to say yes, and switch wholesale to such a portfolio model. Yet it's hard to say no too, given the results, especially for a retired investor. We're intrigued but sitting on the fence on PP.

Disclaimer: This post is my opinion only and should not be construed as investment advice. Readers should be aware that the above comparisons are not an investment recommendation. They rest on other sources, whose accuracy is not guaranteed and the article may not interpret such results correctly. Do your homework before making any decisions and consider consulting a professional advisor.
Posted by CanadianInvestor at 12:53

Good post, as usual.
I have a few comments:
1) This may be an awful time to invest in long government bonds. I personally chose BMO Discount Bond Index ETF (ZDB) since it holds mostly government bonds, however sold at a discount, meaning less of a chance of a severe drop in case of raising interest (which will happen, sooner or later).
2) HISA for cash? It may be OK for a small account, not for a large one. HISAs are only insured up to $100,000. I preferred DEX Floating Rate Note Index Fund (XFR) as a replacement which not only does not fluctuate much in value but also raises the interest it pays as interest rates grow.
3) Gold ETF? Don't even think about it! Harry Browne recommended buying physical gold. Besides, I calculated how much it would cost me in commission if I invested in gold ETFs vs. gold coins. Since I am about 10 years away from retirement (hopefully) I assumed I was going to continue saving for the first 10 years. Over 30 years I would pay the equivalent of 2.83% of my savings for holding physical gold as opposed to 13.98% for IGT and a whopping 25.35% for CGL.C. So no gold ETFs for me, thank you! My gold coins are doing just fine in my $45/year safety deposit box at the bank.

Hi Cristian, Good comments that make me think it is worth exploring further the options for holdings to implement a Permanent Portfolio in ways that are effective, practical, low cost, convenient, etc.