REITs are a basic component of most diversified portfolios. We first looked at the basic characteristics of investing in real estate trusts and funds in 2010, with updates in March 2011 and in December 2013 after Vanguard Canada launched its REIT ETF in November 2012. A bare month ago in September, First Asset entered the market with its ETF, joining well-established competitor funds from iShares and BMO. Let's do another update to see which is the best ETF and to see how the sector has been doing.


We've compiled the comparison table below to compare the ETFs and their characteristics. Data was obtained from GlobeInvestor's My WatchList, TMX Money and Morningstar Canada, as well as from the provider websites. 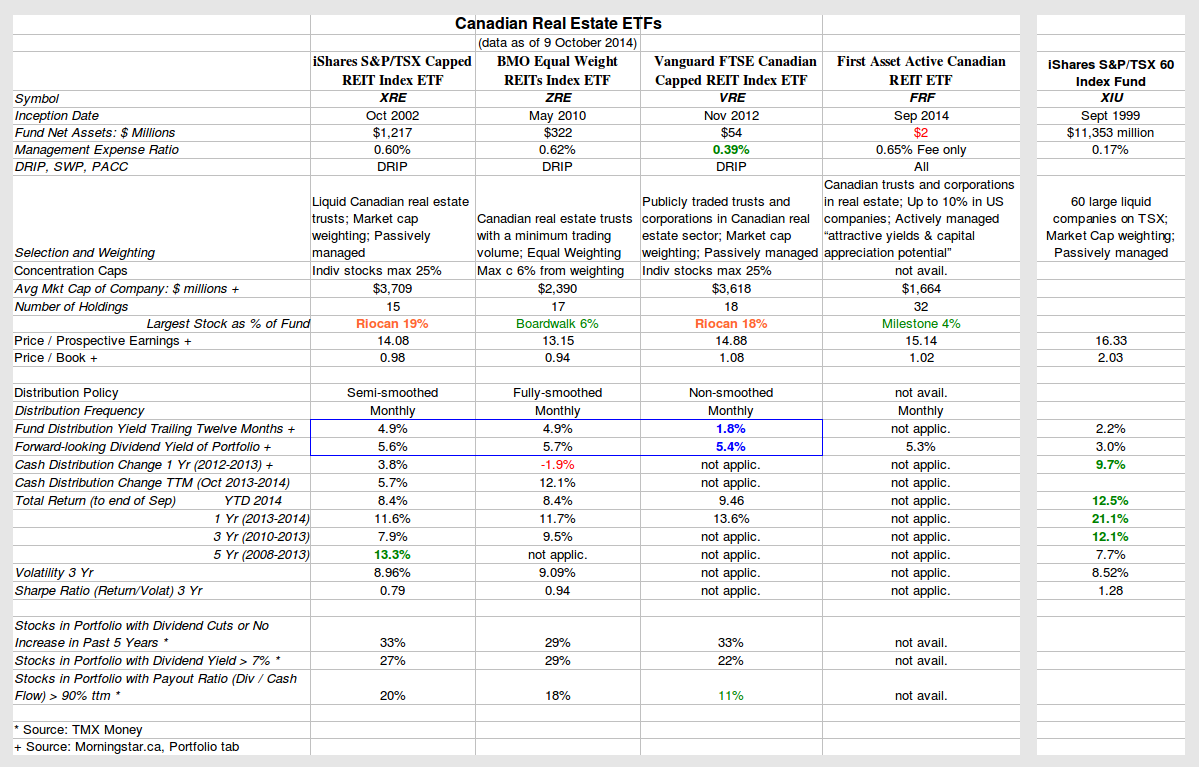 What are the key points arising from the table?

First Asset's Active Canadian REIT ETF (TSX symbol: FRF) is an unknown - There is very little hard data about FRF. There is no track record, of course. But there is also little visibility into the portfolio. The entire portfolio is not revealed, only the top ten of 32 holdings. The fact that it is actively managed fund means that the fortunes of investors in FRF will depend largely on the skill of manager Lee Goldman in attaining the objective of "... regular income and long-term capital appreciation". One thing that is quite likely are higher trading expenses, as a result of the active management. This in turn is likely to push the management expense ratio (MER) a greater degree above the management fee than FRF's passively managed competitors.

Similar portfolios - There is a high degree of similarity between the other three ETFs, especially between that of iShares (stock symbol: XRE) and Vanguard (VRE). The number of holdings is almost the same, as is the average size of companies, their P/E and P/B ratios, the largest stock and its weight (inevitable given that they both weight holdings by market cap). Our other table below shows in detail the high degree of overlap between the holdings of XRE and VRE. 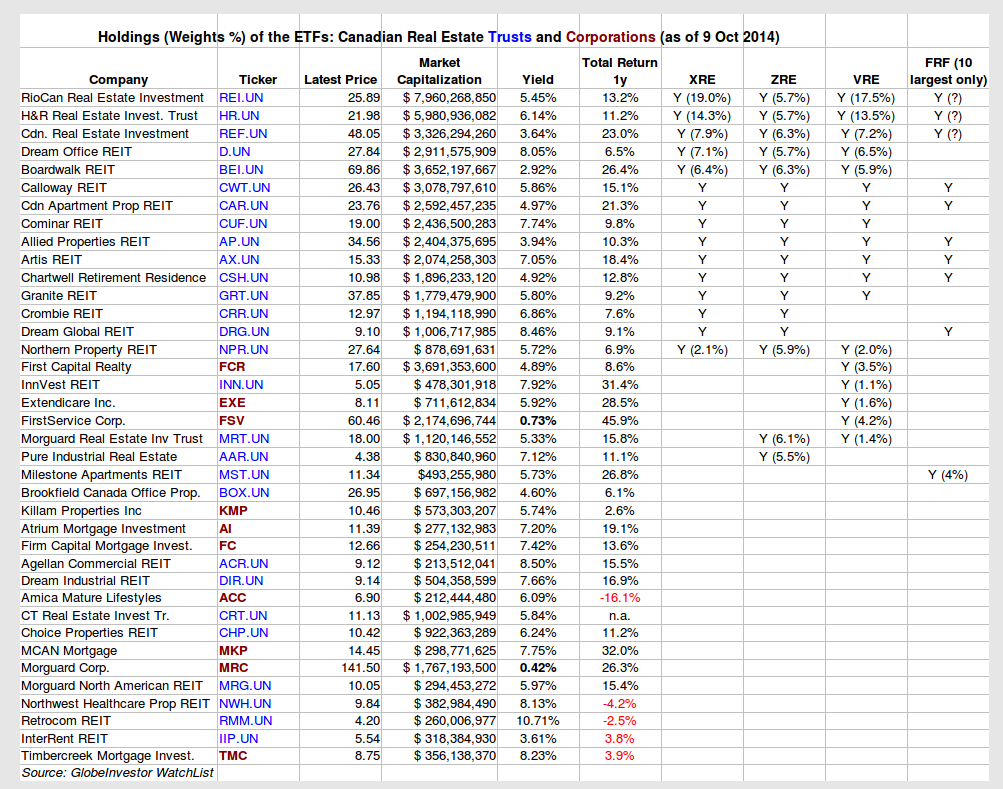 BMO's ZRE is also fairly similar with a high degree of holdings overlap. But ZRE weights holdings equally, resulting in much less concentration in one stock - Riocan is only around 6% of ZRE versus the 18/19% it represents in XRE and VRE. We consider the lower concentration risk to be a plus for ZRE.

Similar multi-year returns for XRE and ZRE - Despite the different weighting schemes, XRE and ZRE, the funds with the longest history, have amazingly similar returns and volatility. Both have also lagged the TSX benchmark stock fund (iShares' S&P / TSX 60 Index ETF, symbol: XIU) over the past three years.

Encouragingly, after a big dip in 2013 when interest rates took a blip upwards, returns have been positive again recently as interest rates again moderated. Every single holding in all of the ETFs has had a positive total return over the past year.

VRE's management expense ratio advantage - One significant difference between the ETFs is VRE's expense ratio, which is 0.2% or more lower than the others'. All else being equal, which does seem to be quite the case per the above, a lower MER leaves more money for the investor, year-in, year-out. Vanguard's cost simulator shows that the MER difference constitutes a significant long term advantage if the funds achieve the same long term return from holdings.

Distribution smoothing and yield: differences more of optics than of substance - ZRE pays out the same smooth amount of cash every month (currently $0.083 per unit). Meanwhile, XRE typically has paid the same amount for several months at a time, then it changes up or down, and VRE pays an erratically varying amount every month.

That smoothness of ZRE's distribution is not because the underlying holdings produce such steady income. As we've seen above, the holdings are pretty much the same as XRE's and VRE's. The difference arises only because BMO managers have decided to pay out a steady amount to suit investors who look at REIT funds as income generators.

All the ETFs, in order to maintain their internal non-taxable status and allow all income to be taxed in investors' hands, must distribute all their income in any calendar year. Within the year, whether it is paid out evenly each month, or in gyrating amounts, doesn't matter. The choice to smooth the income can result in some return of capital (ROC) to the investor if BMO mis-estimates the yearly income and pays out too much (that might be a bit of bad ROC but we have to remember also that good ROC can consist of unrealized capital gains or index-mimicing distributions - see our post on Good and Bad ROC, and this post in 2013 which discussed XRE and ZRE's ROC performance). The key point is that both XRE and ZRE have had returns, a sum of income received from holdings and their capital gains, that have consistently exceeded what they have distributed annually. So, though both have given out ROC, they are OK.

The other non-issue is Vanguard's consistently lower distribution yield. Read some excellent, simple explanations of how this comes about by Canadian Capitalist or Canadian Couch Potato or in one of Vanguard's FAQs. Vanguard's VRE portfolio is generating the income - see the blue bordered cells in the table that show the low trailing distribution yield of 1.8% along with the 5.4% yield of the portfolio holdings. The income is being distributed by the ETF, it's just that as the ETF grows, the investor benefits from capital gains instead of cash income.

For investors who are not withdrawing but building up assets and reinvesting distributions, the building up of capital gains in VRE's Net Asset Value can even be a convenience, though all the ETFs offer a free automated dividend/distribution reinvestment program (DRIP) which can accomplish more or less the same thing.

Real estate a good diversifier in a portfolio - Some investors look at the high distribution yield for income as the main benefit of REIT ETFs. But long term investors, who follow the strategy of rebalancing to a fixed asset allocation (see our Rebalancing what, why and how and model portfolios we have suggested - Simple, Swensen Seven, Smart Beta), look to the diversification benefits of REIT ETFs. The data is accumulating with time and it reinforces the notion that REITs provide diversification benefit by virtue of providing positive returns that are uncorrelated with other asset classes.

We can see this by using InvestSpy.com's calculator to find that XRE (enter the symbol XRE.TO) over the past twelve years has a 0.53 correlation with XIU (enter XIU.TO) and a -0.05 correlation with XBB (enter XBB.TO), the iShares broad Canadian bond ETF. The numbers vary somewhat for different time periods but XRE has had consistently low correlation with XIU and XBB i.e. away from the 1.0 mark which indicates the complete perfect correlation that we do not want. By contrast, XIU's correlation with US equities, as represented by the S&P 500 (SPY) in InvestSpy, has been 0.7 or higher all along.

Bottom line: It's a trade-off between the lower concentration risk of BMO's ZRE and the appreciably lower MER of Vanguard's VRE. We tend to favour the certain benefit of the lower MER, but all depends on the continuation of at least reasonable performance of big holdings Riocan and H&R.

Next week, we'll therefore look at the health of the individual REITs. Readers will also have noticed that the ETFs don't have many holdings and even a fairly small individual investor could buy all or most of the REITs in the ETFs themselves and save any MER entirely. In two weeks, we'll examine the considerations involved in managing a portfolio of REITs.

Disclosure: This blogger owns REITs, but only shares of individual REITs, and none of the ETFs mentioned above.

Disclaimer: This post is my opinion only and should not be construed as investment advice. Readers should be aware that the above comparisons are not an investment recommendation. They rest on other sources, whose accuracy is not guaranteed and the article may not interpret such results correctly. Do your homework before making any decisions and consider consulting a professional advisor.
Posted by CanadianInvestor at 16:13

Thanks for sharing the great analysis