ETF Liquidity Risk - What's real, What's hype, What to do

A few days ago, deputy governor of the Bank of Canada Carolyn Wilkins voiced concerns about ETF liquidity, a repetition of those raised in 2011 by the Financial Stability Board and by the Bank for International Settlements. She made the provocative statement that there is an "illusion of liquidity" with certain ETFs, using as an example those ETFs holding high-yield bonds. The concern is that ordinary investors could be caught in the cross-fire when interest rates start to rise, triggering large redemptions of ETF holdings and causing a crisis by the disappearance of liquidity (the ability to quickly and cheaply buy or sell without significantly affecting market price). No one wants the nasty surprise that a supposedly easily-traded ETF suddenly cannot be sold. But various ETF providers and industry participants reacted strongly to Wilkins in a Financial Post article, saying ETFs do not cause or create additional liquidity, nor additional risk. Who's right, what is the reality for ordinary investors and what can we do before a crisis hits to avoid investment pain?

Hype: ETFs create, or are exposed to, additional risks and problems
As researchers at the EDHEC-Risk Institute dissected in 70 pages of detail in a 2012 analysis, ETFs are not more, and in some ways less susceptible, to liquidity problems than mutual funds. The EDHEC authors don't mince their words about the FSB and BIC documents, calling their concerns "vague, highly tentative and hardly ever based on facts ...".

Reality: The real liquidity risk arises from the under-lying assets.
The old expression that one cannot turn a sow's ear into a silk purse applies. High-yield corporate bonds are less liquid, less easily tradable, than government bonds. That's a fact that doesn't change no matter whether it's an ETF or a mutual fund holding them. Institutional investors, those who might be wanting to sell the huge blocks of shares that might stress the market and cause a liquidity crisis, know this already. The only people who might be under an illusion of liquidity are us, less-informed retail investors.

The possible illusion is that trading volume may be mistaken for liquidity. Some ETFs, like the most popular US-based high-yield bond ETF, the iBoxx $ High Yield Corporate Bond ETF (NYSE: HYG) with $12.4 billion in assets, trades a very large $441 million per day on average. Yet it is much less liquid, especially in a crisis when US government securities are the safe haven, than the tiny by comparison Vanguard Short-term Government Bond Fund (NYSE: VGSH) with $505.8 in assets, which trades an average $6 million per day.

The reason the much higher liquidity of VGSH happens, that it would be easy even to trade large blocks of shares, is the presence of market makers and authorized participants who can create or redeem new shares of the ETF at will from the huge readily available supply of government T-bills and bonds. ETF.com explains how and why the mechanisms work in a series of short, informative articles What is the Creation / Redemption Mechanism?, Understanding ETF Liquidity and Understanding Spreads and Volume.

Assessing ETF liquidity - ETF.com has a very handy tab labelled "Tradability" in the detail it provides for every US-traded ETF (unfortunately, it does not cover Canadian-trade ETFs), e.g. this page for HYG. The tradability of HYG is only a weak 75 out of 100, while VGSH's is 100. So it is true investors need to be wary of the liquidity of high-yield bond ETFs, just not for the reason Wilkins cites. Ironically, apparently (see Liquidity crunch in bonds hits ETFs, raises risk in ETF Insight) part of the reason for the low liquidity of such bonds is the action of government regulators attempting to reduce the riskiness of investment bankers, which has drastically reduced the ready market supply of bonds.

Typing in the ticker symbols of a number of ETFs into ETF.com gives us a pretty good idea of the liquidity of various asset classes:
Though Canadian-traded ETFs are not tracked in ETF.com and there is no comparable source in Canada, the above help us figure out the liquidity for Canadian ETFs that track the same under-lying securities, which is what matters most.

There is even a US-traded ETF for total market Canadian equities:
EWC would be similar to Canadian ETFs like iShares' XIC (trading symbol on TSX), BMO's ZCN and Vanguard Canada's ECN.

Liquidity does not equate to volatility or risk - It is important to remember that though liquidity is one aspect of overall risk (and it is always mentioned in any ETF's prospectus as one of many risks), more-or-less equally highly-liquid VTI is still a lot more volatile than VGSH as this Yahoo Finance chart of the ETFs' prices shows. The day to day price of VGSH is a virtual flat line. 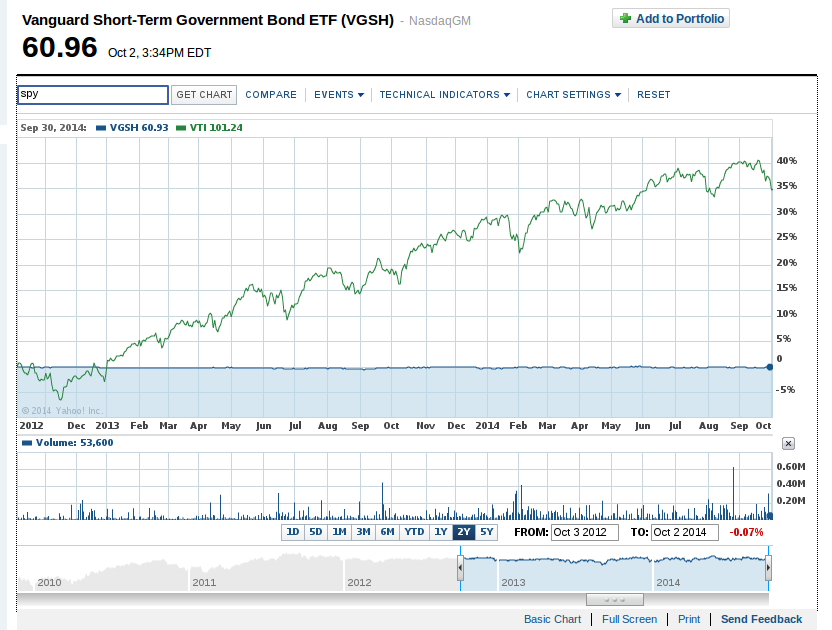 For HYG default risk would be a key concern, as we discussed in this post about default rates. Only a small sliver of HYG's holdings are safer investment grade (BBB or better) per the iShares holdings breakdown of credit quality. Should interest rates rise in any appreciable fashion, not only will HYG's price fall in the usual fashion that sees bond prices and interest rates go in opposite directions, it may put financial pressure on the borrowers and a rise in default rates within HYG's holdings. Liquidity may well be a lesser concern for HYG investors.

Disclaimer: This post is my opinion only and should not be construed as investment advice. Readers should be aware that the above comparisons are not an investment recommendation. They rest on other sources, whose accuracy is not guaranteed and the article may not interpret such results correctly. Do your homework before making any decisions and consider consulting a professional advisor.
Posted by CanadianInvestor at 13:04