Almost five years ago we reviewed how a broadly diversified international portfolio would have fared in the period from 1992 to late 2009. There's been more water under the bridge so let's update and expand the original analysis. We can add nine more years of data - the five from 2009 to 2013 and those back to 1988 - because Norbert Schlenker at Libra Investment Management has performed the excellent favour to investors by continuing to update the annual investment returns for a range of asset classes and making it available for free as a downloadable spreadsheet. In the intervening years we have also written about various model portfolios so we'll test those that we can to see how they might have performed (the main gap is those portfolios that invest in real estate since the spreadsheet unfortunately does not include that asset class).

The International Portfolio still performs very well
The diversification benefit of additional equity holdings in the USA, developed market countries (abbreviated as EAFE - Europe, Australasia, Far East) and Emerging markets (such as India, China, Russia and Brazil), continues to be felt, primarily by boosting returns, while the T-Bill and bond holdings dampen portfolio swings, as our chart below shows. 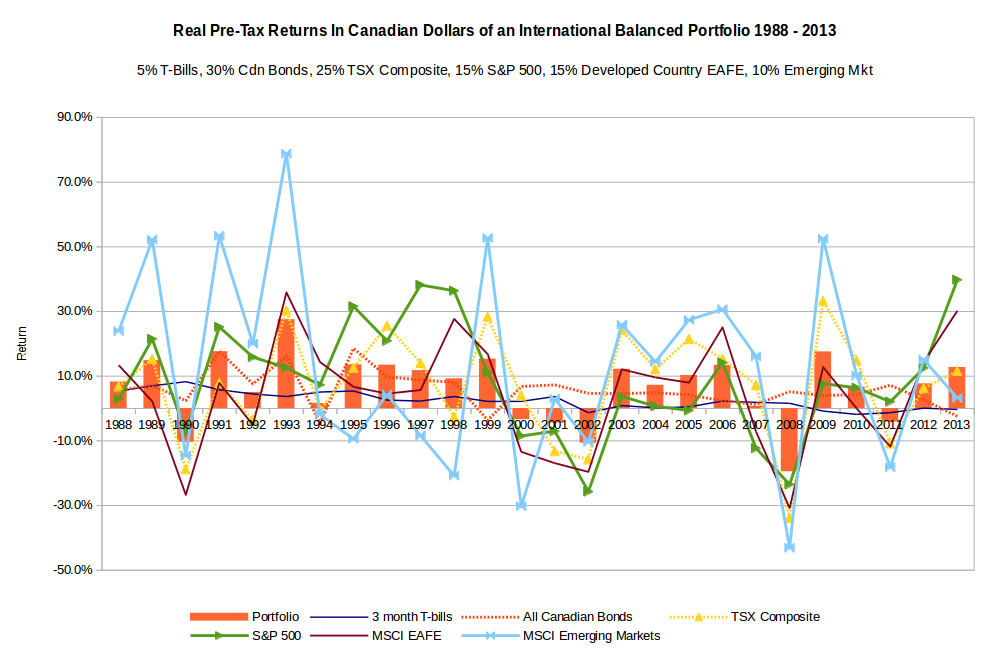 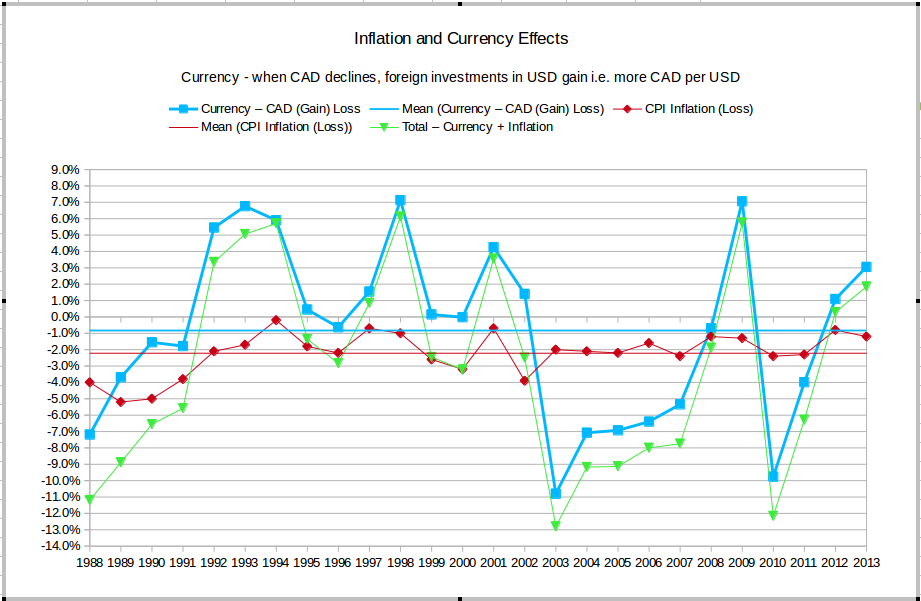 ... and currency swings often have quite substantial effects, sometimes boosting, sometimes hindering, returns of foreign equities, which also confirms what we noted in the first post five years ago. As the Canadian dollar (CAD) declines vis-a-vis foreign currencies, the same amount of foreign currency buys more Canadian dollars. That boosts returns. When CAD appreciates, the reverse happens. Thus, in our chart, CAD gains/appreciation are shown as a negative effect on returns (of the foreign holdings) and CAD losses/depreciation have a positive effect. In the early 2000s, for example, the Canadian dollar was gaining in value and that undermined returns of foreign holdings for six years in a row as the chart shows.

Note that the currency exposure for holdings such as developed countries and emerging markets is to the currency of those countries and not the US dollar when, for example, holding ETFs that are traded in USD on US exchanges. CanadianFinancialDIY explained how and why this works in this post.

In the 26 years covered by 1988 to 2013 almost exactly half - 12 years - currency movement helped returns for a Canadian investor. The mean of the yearly gains and losses over the period is slightly negative, just under 1%. That seems to add further evidence to the conclusion we presented in a 2012 post that hedging foreign currency holdings is not really necessary in the long term.

The International portfolio grew more, with less volatility, than a similar domestic-only balanced alternative
The following comparison chart was compiled from results of the Stingy Investor Asset Mixer tool that uses the data from the Libra spreadsheet. The international portfolio also gained more than either the Lifelong portfolio and the Permanent portfolio. However, both these portfolios experienced considerably lower volatility, no doubt due to the 50% allocation of both to T-Bills and bonds.

The Permanent portfolio in particular looked much less attractive during a retirement phase of 4% annual withdrawals as it had a lot more down years and minuscule total growth. The stats reinforce the idea of the Lifelong portfolio as a "good-enough" compromise, never the best but never the worst.

Finally, by way of interest only since few would advocate such an unbalanced portfolio, we include stats for the 100% domestic equity (TSX Composite) portfolio and the 100% Canadian bond portfolio. Neither grew as much as either the Canadian balanced or the Lifelong portfolio, a surprise especially with respect to equities which have the image of higher eventual growth despite higher volatility. Regular annual rebalancing (which is what the tool models) provided the returns boost (see our post Portfolio Rebalancing - What, Why and How). On the bond side, the surprise is the higher number of down years during retirement. The lower returns from bonds are more susceptible to turning negative, closer to the line between positive and negative, when withdrawals are also happening.

Disclaimer: This post is my opinion only and should not be construed as investment advice. Readers should be aware that the above comparisons are not an investment recommendation. They rest on other sources, whose accuracy is not guaranteed and the article may not interpret such results correctly. Do your homework before making any decisions and consider consulting a professional advisor.
Posted by CanadianInvestor at 17:20