A few years ago, we explored whether the presence of women on boards of directors was something investors should pay attention to. The indications we found in research and our cursory look at performance was that, yes indeed, companies with women fared better. We were curious to see how things have progressed since then. What we found looks pretty good.

Plenty more women on boards!
In 2012, the slow progression of women into the boardroom caused some controversy, e.g. the "Glacial Progress" Globe and Mail article by Janet McFarland. Corporate Canada seems to be changing fairly quickly, based on our analysis of the 100 largest companies by market cap that are publicly traded on the TSX (extracted using the TMX Money stock screener).

In November 2012, the top 100 companies had 167 women directors. Today the number is 200,a 20% increase. (We assembled this data ourselves by looking at the bios of directors under the Insiders tab of company listings on Morningstar.ca - e.g. for Royal Bank of Canada, which surprisingly is one of only three companies which have fewer women - one each - on the board than in 2012 ... but we shouldn't be too harsh on the Royal since it still has four women on its board and is thereby still in the upper echelon of the women director count as our comparison table below shows).

Though we don't show it in the table, the 15 companies that already have women are adding more than those with none at all in 2012. Seven of them added women. In contrast, only five companies went from zero to one, Catamaran jumped from zero to two, while eleven stayed at zero.

As an interesting aside, the financial sector which dominates the top of our table seems also (our impression from reading bios- we didn't count) to be the source, in the form of retired executives, of many women board members for other industries. 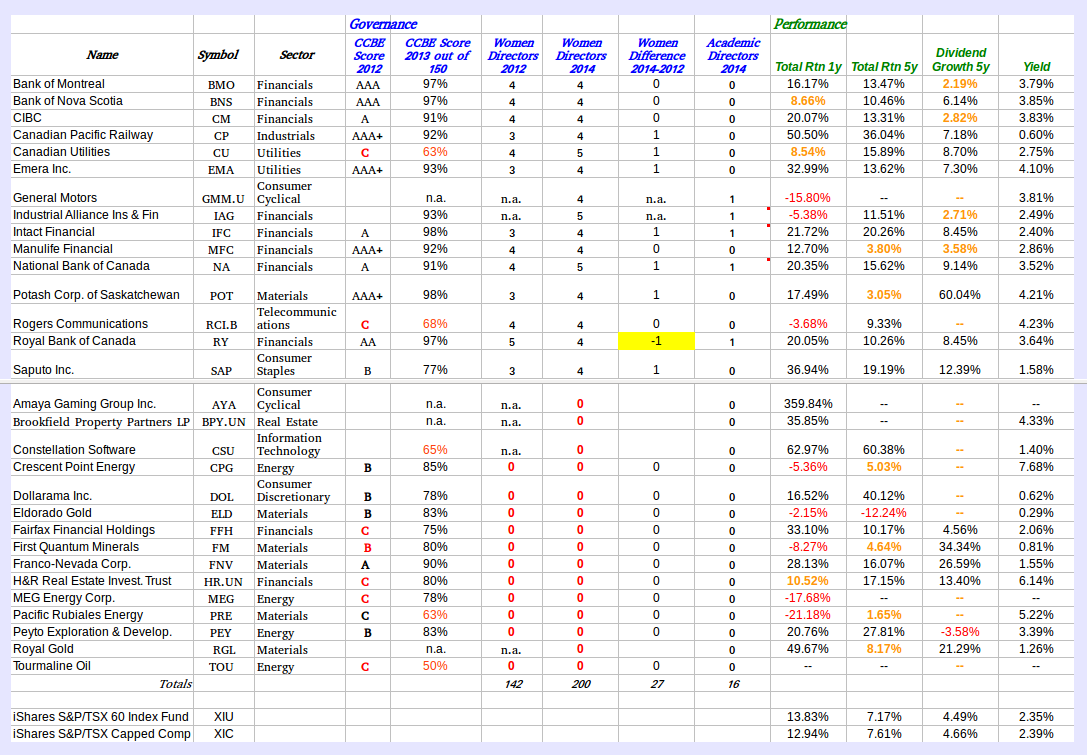 ... and their stock performance is generally better too
As we found in 2012, the one- and five-year total returns of companies (performance data is from the GlobeInvestor WatchList tool) with the most women directors at the top of the table look much more impressive on average, with positive returns that more often exceed our benchmarks, the TSX Composite (embodied in the iShares ETF that tracks that index with stock symbol XIC) and the large cap TSX 60 index (tracked by the iShares ETF with XIU symbol). Dividends are higher on average and five-year dividend growth is almost always positive and more often in excess of the benchmarks.

Board diversity is greater in other ways too - with the inclusion of academics.
We were a bit surprised to come across Professors in the Boardroom and Their Impact on Corporate Governance and Firm Performance by Bill Francis, Iftekhar Hasan and Qiang Wu (acknowledgement to Alpha Architect blog for the reference) that found a positive relationship between company performance and the presence of academics on boards. The paper sums up that profs are often "valuable advisors and effective monitors".

We scanned the director bios for the profs too and lo and behold, though few companies seem to consider academics at all (only 16 out of the 100 largest have even one), several of the companies that do are at the top of our table, while there are none in the bottom. Mere coincidence of no significance? Probably not, board diversity helps sound decision-making by bringing together different perspectives and ways of thinking about issues.

Bottom line: The conclusion is the same as two years ago - women directors do not absolutely ensure a profitable investment but it is a positive factor to include in the analysis of a company and its stock.

Disclosure: This blogger directly owns shares of stocks mentioned with symbols BMO, BNS, CU, EMA, IFC, NA, POT and RY at the top of the list and HR.UN at the bottom, along with ETFs that contain more or less all the stocks. In addition, he has a stake in the futures of four daughters who might well one day be considered for board membership somewhere somehow.

Disclaimer: This post is my opinion only and should not be construed as investment advice. Readers should be aware that the above comparisons are not an investment recommendation. They rest on other sources, whose accuracy is not guaranteed and the article may not interpret such results correctly. Do your homework before making any decisions and consider consulting a professional advisor.
Posted by CanadianInvestor at 14:43