Every six months or so, we take a look at which sectors and companies are currently in (the Darlings) or out (the Dogs) of favour in the market. Our method is simple - compare the weightings of sectors and stocks in two popular ETFs, the iShares S&P/TSX 60 Index Fund (TSX symbol: XIU), which is market cap based and tracks market sentiment, against the iShares Canadian Fundamental Index Fund (CRQ), which chooses holdings based on past hard accounting results likes sales, dividends, cash flow and book equity value. When an XIU holding weight far exceeds its weight in CRQ we can conclude that the market likes the stock and expects it to do better than its past results suggest, and similarly in the contrary sense.

The Numbers
The table below shows the companies and the sectors colour-coded - Darlings in Green and the Dogs in Red with the really big differences between XIU and CRQ highlighted in Yellow. The table also shows the change in internal weighting over the past eight months for each ETF, which tells us stocks and sectors that have been on the up- or down-swing, either in terms of price (XIU) or fundamentals (CRQ). 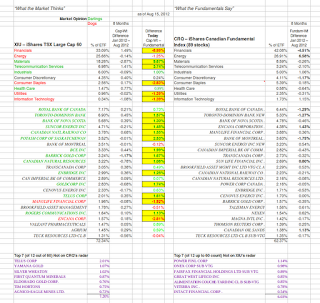 Financials - A few Darlings: Big banks are back in demand, at least the three biggest are; the Royal Bank (RY), TD Bank (TD) and Scotiabank (BNS) all exceed their fundamental weighting by a considerable amount. That's a continuation of the trend we noted in January at our last update and a reversal of the situation a year ago. The enthusiasm towards financials is not uniform across the board. Some others are neutral as Bank of Montreal (BMO) and CIBC (CM) trade with similar weight in both funds.

Some still are Dogs: Manulife (MFC) and Sun Life (SLF) still get no enthusiasm from investors, though a glimmer of hope is that the market weighting has stabilized. Are these stocks a turnaround play?

Materials - Still Darlings, only less so: The sector has double the weight in XIU of that in CRQ. Three companies are primarily responsible - Potash Corp (POT), whose market value weight is an amazing 2.5% more than its accounting fundamentals justify, Barrick Gold (ABX), which is still 1.67% over-weighted despite a considerable drop in that over-weighting since January, and Goldcorp Inc (G), which has dropped some too but is still 1.7% over-weighted.

Energy - the Darlings deliver: It looks like the market anticipation was right, as the weighting for the sector in CRQ has caught up with that in XIU. Some companies, namely Suncor (SU), Canadian Natural Resources (CNQ) and Enbridge (ENB), still qualify as Darlings as their market weight continue to far outweigh their accounting weight.

Meanwhile, the one sector Dog is Encana (ECA). We wondered a year ago, and still wonder now, what significant future events justify the market negativity suggested by its hugely lower weighting in XIU. Is ECA hugely under-priced or are the poor results in the most recent quarter a harbinger of things to come that will pull down the weighting in CRQ? A June article in Real Money, when the price was a bit lower than currently, called ECA value play.

Telecommunications - how much more Darling can it get? BCE Inc (BCE) and Telus (T) have been riding high for over a year. They have become even more in demand by investors as their market weight has increased since our last update. Meantime they are far down the list in CRQ's holdings, both having slid a bit further down. In other words, fundamentals are going the opposite direction of market sentiment. Is this a possible shorting opportunity?

Utilities - Individual companies are neutral but the sector is a Dog: Both companies included in XIU - Fortis (FTS) and TransAlta (TA) - have similar weighting in CRQ and thus they look neutral. But there are several other utilities included in CRQ and not at all in XIU - Canadian Utilities (CU), Emera (EMA) and Atco (ACO.X) - that cause the sector to be under-weight and a Dog as a whole despite the out-performance of these stocks year-to-date.

Information Technology - a Dog because of Research in Motion (RIM). The fall from grace of this technology leader that was a Darling a few years ago now sees it far less valued than its accounting results indicate. The market is in effect predicting even worse accounting results in future - will that happen?

Consumer Staples - still a Dog: The sector is severely under-weighted in XIU compared to CRQ both because some companies like Viterra (VT), Empire (EMP.A) and Alimentation Couche-Tard (ATD.B) do not even appear in XIU and because those which do, like Loblaws (L) and George Weston (WN), have a market cap weight much below their fundamentals. Is this possibly a buying opportunity? PurpleChips.com (see our post on this stock-picking method) rates one stock of this sector a Buy - WN, while SC, MRU and ATD.B are rated over-priced at current prices.

Consumer Discretionary - neutral, neither Darling nor Dog. This is the one and only sector where XIU and CRQ are more or less in balance with about the same weighting in each.

Health Care - a Darling: Valeant Pharmaceuticals (VRX) is the sole health care company in both XIU and CRQ. Its weighting is three times in XIU what it is in CRQ, a sign of a definite market Darling.

Looking back at previous Darlings vs Dogs reviews and comparing to what has happened since, we see that sometimes the market is right, but other times it is not and changes its mind.

The comparison between market sentiment as seen in XIU and accounting fundamentals as captured by CRQ continues to provide good leads for further investigation (see our previous post Getting Started in Value Investing for some ideas on that process) of possible stock purchases.

Disclaimer: this post is my opinion only and should not be construed as investment advice. Readers should be aware that the above comparisons are not an investment recommendation. They rest on other sources, whose accuracy is not guaranteed and the article may not interpret such results correctly. Do your homework before making any decisions and consider consulting a professional advisor.
Posted by CanadianInvestor at 15:21