Women on Boards of Directors in Canada - Should Investors Care?

A few days ago, Credit Suisse released Does Gender Diversity Improve Performance? The study of 2360 companies worldwide from 2005 to 2011 did indeed find a positive answer to its question, as the Financial Post reported in Shares of companies with women directors outperform those with men-only boards. A 26% stock return outperformance by companies with at least one woman on its board is certainly something to take notice of. So the natural question is, how strong is the relationship, does the presence of women on a board more or less guarantee great returns and is this factor a good stock selection screening criteria as a result? Since Canadian investors place more emphasis on the Canadian market, let's focus on the Toronto Stock Exchange.

How many women directors and where are they concentrated?
Credit Suisse looked at the 102 largest Canadian companies and found that women only made up 14.5% of directors but the study doesn't say how many companies have at least one woman on the board. The data doesn't seem to be already compiled anywhere, so we laboriously tallied, using Sedar's database search to pull up the latest Management Information Circular (which Sedar labels Proxy Circular), the women directors of the 100 largest firms traded on the TSX. 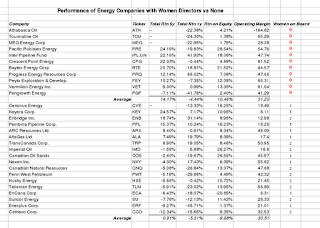 Boards with women tend to be better boards and companies with better boards tend to outperform
The idea of vetting companies using women board members as a test is not completely useless since their presence looks to be associated with more effective boards. The Clarkson Centre for Business Ethics and Board Effectiveness each year rates all the TSX company boards. Taking the latest 2011 tables and matching against our data on women directors, we find that very few men-only boards rate very highly. Only one of our men-only largest 100 - Vermilion Energy - got as much as an AA rating from CCBE. All fifteen of our 100 largest firms that attained CCBE's highest AAA board rating had at least one woman director, as did 10 of 11 AA boards and 13 of 16 A boards. As we noted a year ago in Stocks & Board Governance - Do the Good Guys Finish First or Last? companies with better boards do seem to reward investors but it is a tendency, an average. Credit Suisse also couches its conclusions in terms of tendencies, despite the huge glaring headline outperformance number.

When we recently winnowed out the Olympic Champion Canadian Stocks, we did not consider whether they had women directors, but lo and behold, all sixteen companies in our list have at least one woman director. We suspect this is more than mere coincidence.

The Credit Suisse report notes specific strengths and attributes that women can bring to boards. The bigger talent pool argument certainly makes sense - looking again to the Olympics for inspiration, we note that, as of time of writing, four of the seven Canadian medals to date have been won by the women!

Another group that tracks boards is the Canadian Coalition for Good Governance, a group of large institutional investors such as pension funds. Their take on the issue of women on boards from their website was expressed in a presentation to a Senate committee: "... gender diversity alone is not sufficient to ensure a high quality board ..."  Companies that include token women, or which don't do a good job selecting board members in general, are not likely to magically outperform with women directors.

We don't know whether the Financial Post intended the irony but the photo accompanying the above-cited news article is of a rather attractive newly-appointed first woman director of a well-known company. Perhaps this was not the best photo choice, given the performance of Facebook stock. Caveat investor, always.

Disclaimer: this post is my opinion only and should not be construed as investment advice. Readers should be aware that the above comparisons are not an investment recommendation. They rest on other sources, whose accuracy is not guaranteed and the article may not interpret such results correctly. Do your homework before making any decisions and consider consulting a professional advisor.
Posted by CanadianInvestor at 13:47