IPOs: Avoiding the Dangers and Spotting the Opportunities

When a company offers its stock for sale to the public for the first time, that is called an Initial Public Offering. From closed private ownership, the company stock begins to be traded on an exchange such as the TSX and it becomes available to any investor to purchase. It is usually an exciting time, especially when a highly visible company like Facebook launches its IPO, as it recently did. Unfortunately, sometimes the excitement turns to anger and disappointment, as it has in the case of Facebook (NASDAQ:FB) - its stock has plummeted about 50% in the few months since launch.

Facebook is not alone either. Six years ago Canadian fast food icon Tim Hortons (TSX: THI) attracted a lot of attention when its stock went IPO. There was an initial spike upwards then over the ensuing months the stock price sank considerably. However, as Globe columnist Rob Carrick described in Tim Hortons serves up a valuable IPO lesson, that was not the end of the story and the picture (see Google Finance chart below) over the long term looks much more positive than the initial disappointment. 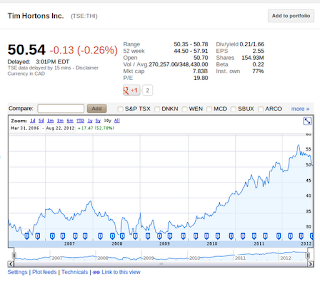 Carrick's lessons are well worth noting: "... the smarter play here for the buy-and-hold investor was to be patient and let all the excitement die away before buying in". Investopedia.com list a few more factors to be wary of in the immediate post-IPO period in the Don't Just Jump In article of its useful primer IPO Basics. Stingy Investor's Is That a Hole in Your IPO? backs up the idea to be cautious at first by citing extensive research on Canadian and US IPOs that showed a pattern of big first day price rises followed by under-performance on average over the next five years. Does that mean individual investors should just ignore IPOs entirely?

Maybe not, here's why. The initial excitement followed by disappointment may well, as Stingy Investor says, cause the stock to fall unduly far through over-reaction. That could be a good buying opportunity.

Even if there is no hype and no over-reaction, recent IPO stocks can be attractive opportunities. A good IPO where a company is enjoying success and is going public to obtain more capital for expansion can lead to much better than average returns, as seen in the following example of the largest Canadian IPOs from two separate years.

Canadian IPOs - the 2004 and the 2010 Vintages
When we took PWC Canada's listings of the top IPOs in its handy Survey of IPOs in Canada, we discovered a contrast between the performance of the 2004 and the 2010 crop. It seem that, as for wines, some years are better than others! as our summary tables below show, 2004 produced a more bitter taste for the investor than 2010. 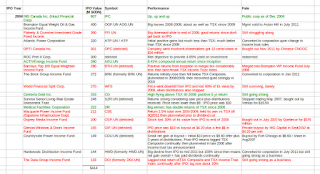 2010
Of the ten big IPOs three look to be big successes for the investor. A few of the other companies like Tahoe Resources (THO) and Pretium Resources (PVG) look risky - though there has been a big run up of the stock, they are mining companies in the development phase so long term success is not assured and they are incurring significant negative net income in the short term. One company, SMART Technologies (SMA), the maker of those ubiquitous interactive whiteboards, is struggling and has really hurt early investors. (Update August 27: thanks to reader Mohamed who spotted that the table below as first posted gave ATH credit for good stock performance whereas it has in fact been fairly dispappointing, as measured from the first trading day. It's a classic example of a big drop from IPO price that Rob Carrick talked about. Whether the rest of the Tim Hortons story comes about - recovery and long term good stock performance - remains to be seen. Though ATH has briefly traded above the $18 IPO price, it has been very volatile and is now trading around $13.)

Differentiating the Good from the Bad IPOs
There is thus no reason to automatically buy or avoid recent IPO stocks. Such stocks, especially those that have gone through a couple of years of market seasoning and have developed a track record, can be worthwhile hunting grounds (in this regard, PWC's survey has lists of the major IPOs each year going back to 2004).

The first obvious discipline for the investor to apply to these companies is thus the usual fundamental analysis of accounting data e.g. see our previous post Getting Started in Value Investing.

A second special set of IPO-specific factors arises from the findings of the 2010 research paper Management Quality and Operating Performance: Evidence for Canadian IPOs by Lorne N. Switzer and Jean-François Bourdon. They found that a successful IPO company had a larger management team with more years at the company and also included chartered accountants. Management teams with years of tenure at the company that varied too much, as well as the presence of dominant CEOs and MBAs on the top management team were bad for performance! Interestingly, the equity stakes of directors and managers did not seem to have a consistent association with the company's success.

Disclaimer: this post is my opinion only and should not be construed as investment advice. Readers should be aware that the above comparisons are not an investment recommendation. They rest on other sources, whose accuracy is not guaranteed and the article may not interpret such results correctly. Do your homework before making any decisions and consider consulting a professional advisor.
Posted by CanadianInvestor at 07:00