Elite Women Directors in Canada - How Do They and Their Companies Perform?

Last week we looked at the general picture of women on boards of directors of publicly traded Canadian companies and concluded that there was a tendency for such companies to do better. This week we go a step further and examine the idea of elite women directors, the cream of the crop and see how they might be associated with better-performing companies.

What is an elite director and why should an investor care?
The idea of elite directors comes from the Clarkson Centre for Business Ethics and Board Effectiveness, which found in a 2004 report with a follow-up in 2006 that a tiny select group of directors were largely responsible for driving improvements in board governance. The CCBE's definition of an elite director is quite simple - those individuals who sit on the most boards are the most sought after and most influential. If women are generally good for companies and investors, then elite women might be even better. Let's have a look.

Who are the elite women directors?
Using the same definition of elite to mean multiple directorships, we sifted through the Sedar regulatory website for the director listings within Proxy Circulars of large Canadian public companies. We counted in directorships of major foreign companies (which goes beyond the CCBE method). It turns out that a mere eighteen women are the elite directors with 3 or more board of director positions in listed Canadian or foreign companies. The list below shows the women and their professional background, along with the companies' stock symbols and the latest CCBE board governance score. Most (2/3) of the elite women are associated with companies that have high governance scores. 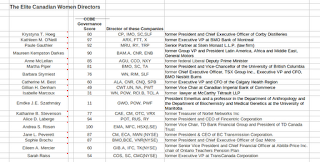 No doubt, it is not a coincidence that many companies with elite men directors from the CCBE 2006 study have re-appeared on the elite women's list. We counted nineteen such companies - BMO, BCE, BBD.B, CCO, CNR, CP, ECA, GWO, PWF, POW, RCI.B, RY, SC,, SLF, SNC, X, TA and TD (TSX stock symbols). Using the 2006 CCBE definition of elite-ness, four women would today make it on an overall both sex list. That's up from only two in 2006, so there's been progress of women's equality on boards.

How have the companies with elite women directors performed?
Now we get to the crucial question for the investor. We entered all forty-six firms with elite women into the Globe Investor's My Watchlist tool, and then sorted by several of the return measures available in the tool. We also entered as benchmarks the iShares passive index ETFs with symbols XIU (TSX 60 largest companies) and XIC (TSX Capped Composite).

Five-Year Total Return (share increase + dividends)
The elite women firms have generally outperformed, with almost 60% (27/46) doing better than both XIU and XIC. This is in,line with our previous blog's conclusion that having women on boards creates a tendency but not a guarantee of out-performance. Perhaps the most telling evidence that the elite women factor is also a tendency and not a guarantee, is that the company with the most elite women - MFC - is also the second worst performing over the past five years with an abysmal minus 18.5% compounded vs XIU's basically flat minus 0.3% total return.

One-Year Total Return
The results for the past 12 months give an almost identical proportion of companies with elite women that have done better than the benchmarks - 28 of 46.

Five-Year Dividend Growth
On this measure, results are not as good, as less than half - only twenty-one of the forty-six firms - managed to grow their dividends faster than XIU's 5.0% growth rate. Compared to XIC, which includes many smaller companies that pay less dividends and is thus an easier benchmark to beat, the result is much better - thirty-two, or 70% of elite women companies beat XIC's compounded dividend increase. The MyWatchlist screenshot below includes all we could fit on one screen. The bottom four worst performers are cut off - SLF, CCO, MFC and RIM. 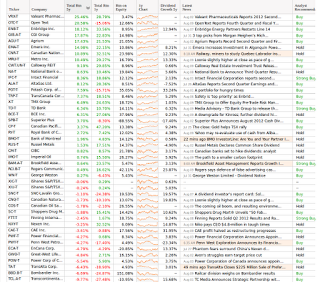 Return On Equity (ROE)
On this basic metric of company profitability, results are similar to those for Total Return - only five companies have a negative ROE, i.e. a net loss in the past 12 months, but only twenty-seven exceed a healthy 10% ROE level.

Analyst Recommendations
Analysts seem to have the same generally positive view of these companies. Again, about 60% (28 of the 46) are rated Buy or Strong Buy.

Olympic Stock Medalist Overlaps with Elite Women
When we cross-checked the sixteen Olympic champion Canadian stocks that have come out as looking good again and again in our many past comparison posts, ten out of the sixteen (62.5%) showed up with elite women directors - BBD.B, BCE, BMO. CM,EMA, GWO, PWF, RCI.B, TA, TD AND TRP.

Bottom line - Elite women directors tend to help companies and investors outperform
Our various measures all say the same thing - the odds of outperformance run about 60% in favour of those companies with elite women on their board. It's another positive factor to add to the due diligence process for assessing a stock as a potential purchase.

Further Reading
One of the elite men directors, David Beatty, a few years ago explained his suggested method for assessing whether a Board will foster good long term company performance - SPISE − style, performance, investment, spine, evaluation. The article contains links to two excellent free CFA Institute guides for investors - one on corporate governance, the other on executive compensation.