A Falling Canadian Dollar Can be An Investor's Friend

The week of October 6th to 10th was remarkable in several respects. Stock markets around the world suffered horrible record-breaking declines as government attempts to deal with the credit crisis seemed not to be working. No market was immune. The Toronto TSX Index fell 16% in the week, the US S&P 500 Index dropped 18%.

The Canadian dollar (CAD) also fell off a cliff compared to the US dollar (USD). From a value of about $1.10 Canadian on Oct.3, by the end of the day on Oct.10th, the USD rose (i.e. CAD fell) to $1.19, an unprecedented 9% shift. But that fall in CAD was actually beneficial to the Canadian investor with foreign holdings.

Here's how this benefit worked. In the chart below, I've taken a popular Exchange Traded Fund similar to the S&P 500, the Vanguard Large Cap Index Fund (with NYSE trading symbol VV) and graphed it in its original USD value as well as its value converted to CAD. The result - instead of the 18% drop, a Canadian owner of VV would only have lost 9%.

On October 10th, the value of VV in Canadian dollars actually rose despite the continued decline of VV in US dollars because the currency effect was stronger.

Naturally, the effect can work the opposite way too. As the Canadian dollar rises against the US dollar or any foreign currency, as has occurred more gradually over the last several years, the value of foreign holdings will be reduced. The net effect depends on whether the currency shift is greater than the stock market movement.

The currency effect extends to all currencies, not just the US dollar. An investor with a holding such as iShares Europe, Australasia and Far East Index Fund (traded in the US on AMEX under symbol EFA and available to Canadian investors) sees its value change according to foreign stock market results in those countries as well as the movement of the many national currencies such as Great Britain's pound sterling, Japan's yen, Europe's euro etc against the Canadian dollar. Note that EFA, despite being sold on a US exchange in US dollars, is actually not influenced by the US dollar, only the Canadian dollar and the other foreign currencies. CanadianFinancialDIY explains why this is so.

In the past year, the Canadian dollar has gone down simultaneously against most currencies. The chart below shows CAD vs other currencies from the RatesFX website.

This has helped cushion the brutal declines in stock markets around the world for an investor with internationally diversified holdings.

Although it is possible to buy funds that remove the fluctuations due to currency by hedging - an example being the iShares Hedged EAFE Index Fund (symbol XIN on the TSX), which is the same as EFA except with currency effects removed - most professional fund managers do not think the costs of hedging worthwhile. Currency swings tend to run out of sync with market moves and reduce the volatility of a portfolio with international holdings. This is a benefit to the investor, as seen during the gut-wrenching week of October 6th to 10th, 2008.
Posted by CanadianInvestor at 07:00 2 comments:

How safe is safe? The current market turmoil and the spectre of numerous failed, acquired and bailed-out banks in the US, the UK and Europe, though not in Canada, raises questions about the safety of investments, even those considered the least risky.

When looking for "safe" investments, most people have in their minds whether or not the invested capital and any interest owing will be paid back, which is termed credit or default risk. But any guarantee is only as good as the strength and reputation of the party making it, which may or may not be the institution where you invested the money. So what are the assurances or guarantees and who are the backers for some common securities?

Equities are very high risk in terms of default risk since no one makes any promise to pay anything back.

Brokerage Account Cash - the industry-funded body Canadian Investor Protection Fund (CIPF) promises to reimburse investors up to $1 million in cash (or other holdings) per account at member companies in case of their insolvency. This includes US dollars or other foreign currency, unlike CDIC coverage. At the end of 2007, CIPF had over $500 million available, which seems like a lot but it has to cover $1.3 trillion of assets at brokerages, most of which is invested in federal and provincial bonds. Is that enough? Since 1969 CIPF has had to pay out only $36 million in total. Is that past a guide to the present? The FAQ answers many questions about coverage.

T-Bills, Federal/Provincial Savings Bonds, Real Return Bonds, Federal/Provincial Bonds - their safety all depend on the credit-worthiness of the federal or individual provincial governments. And they are not all the same. In addition, there are numerous federal and provincial agencies and crown corporations (e.g. Ontario Hydro) issuing bonds and their riskiness is unique to each organisation.

Corporate Bonds - they all depend on the strength of the individual company but are almost always below government bonds.

Obviously, it is impossible for any investor to keep track of and perform risk assessments on all these issuers. Enter the ...

Credit Rating Agencies - companies that assign credit ratings on the issuers of debt as well as the obligations themselves. The main ones are:
Each has a number of classes according to the level of risk but they may give different ratings for the same organisation - after all it is estimation of what will happen in the future and there is judgment involved. Despite their best efforts they can be wrong. The government of Canada's is in the very best class but various provinces are rated lower, though still considered to be high quality. DBRS rates the City of Montreal the same as Enbridge Pipelines at A+ (high).

Like many things in life, safety is a relative and shifting measure.
Posted by CanadianInvestor at 11:26 1 comment:

Investing in a Recession and Avoiding Depression

Recession talk is common these days. The CBC reports that the OECD has forecast minimal growth for Canada in 2008 and is heading for a recession, while in the USA the Boston Globe says Economic Data Point to Recession.

Stock markets have suffered accordingly and you may be feeling like this man contemplating the decline in the Toronto Stock Exchange Index and the US S&P 500 (chart from Google Finance and photo from the Santa Barbara Independent). 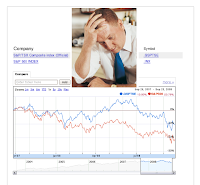 So what can an investor do to minimize losses and take advantage of opportunities?

Stay in the Game - that may sound ironic, a prescription to lose more money and go down with the ship but ... is the ship really going down? The market may take years to recover but it almost surely will. When stock prices have gone down and negative sentiment prevails, it is an even better time to invest than when markets are rising and high. Buying now is buying low, maybe not the absolute lowest but getting attractively low, especially in the US and the UK. I strongly believe that someone investing for retirement years away should continue with a regular saving and investment plan.

Own Sectors with Staying Power - some types of companies and investments tend to hold up well even in bad times. Products and services that are essential will continue to be bought. Others may even leap ahead, either because they are a cheaper substitute for more expensive consumer goods, or because they provide a diversion or small luxury to replace the big ticket items that people defer buying.
Diversify - In my opinion, the most important strategy is to hold a diversified portfolio of investments and to exercise patience for the economy and markets to recover. It is well-nigh impossible to tell in advance when markets will recover from recessionary losses. By the time you can be certain of a recovery, it will already have happened (see a table of past US recessions and how variable they were in Wealth Daily's Recession-Proof Investments).

With wise action by the authorities, the economy should avoid depression (see CBC's report Replay of Great Depression Unlikely: TD Bank Says). With wise investing, there's no need for an investor to suffer depression either.
Posted by CanadianInvestor at 09:16 No comments: