Best and Worst Canadian CEO Pay from the Investor Viewpoint

The recently released All in a Day's Work? - CEO Pay in Canada by Hugh Mackenzie questioned whether CEOs should be paid so much, especially in relation to the pay of an average worker. Others like Vincent Geloso of the Montreal Economic Institute came to the defense of high CEO pay, saying that CEOs live an ever-shortening and very risky existence. In between the blanket condemnation, or approval, sits the investor, merely trying to figure out whether individual CEOs are earning their pay in order to pick good investments. As might be expected, some CEOs and companies (since the Board of Directors are mandated to control CEO pay) have been plain terrible, while others are shining examples of superb performance for very reasonable pay. Let's see who sits where.

The Globe and Mail CEO Pay Tool
When we did this last year, naming the best performers and the most over-paid, we had to do our own data collection. Fortunately for us and all investors, in June 2014, the Globe and Mail posted the excellent (and free!) Interactive Pay-for-Performance graphic display tool created by Global Governance Advisors. It shows CEO pay for the 100 largest companies in Canada relative to other companies and to a series of seven key measures useful to an investor, starting with total shareholder return. It can also break down the various pieces of CEO compensation and show results of each company's Say-on-Pay shareholder voting. The screenshot below shows the possible selections and part of the output display. 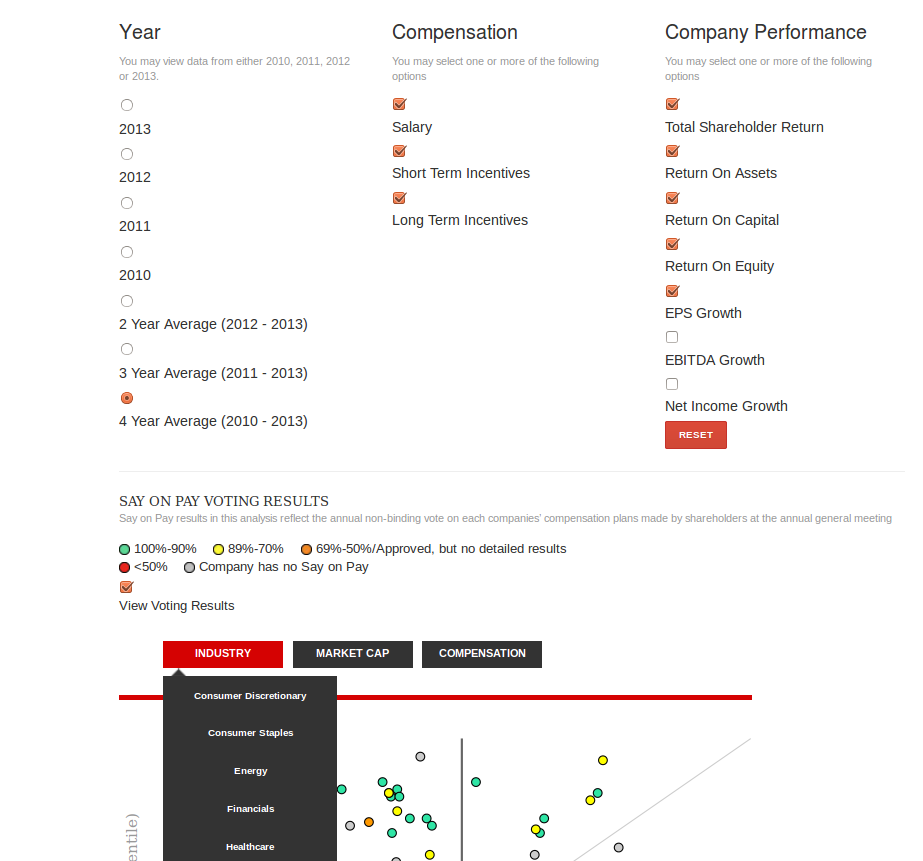 We've played around with the tool to find the most consistently good or bad CEOs / companies across industries, across time from 2010 to 2014 (year-by-year vs averages) and across the various performance metrics. Our logic is that if a company always looks good, no matter the time frame, industry or market cap group comparison, or the measure of performance, that company's CEO pay must be well-aligned to investor interests, and a positive indicator that the company is well-managed. Clicking on the various options and watching the CEO dots move around gives an impression of evolution and sensitivity of results. It's fun to do!

The best performers are those furthest away from the diagonal line that shows where company performance and CEO pay are in perfect balance. We are looking for those in the bottom right quadrant where company performance is above average while CEO pay is below average - the best investor bang per CEO buck. The worst performers are those in the top left quadrant where high CEO pay is matched with below average performance - when investors are being taken for a ride by the CEO.  In general, below the line is favourable for the investor, above it not so.

Best CEO Performers - "Great performance, modest (relative to other CEOs) pay"
It's hard to choose between the first three below, they have all been consistently superb: 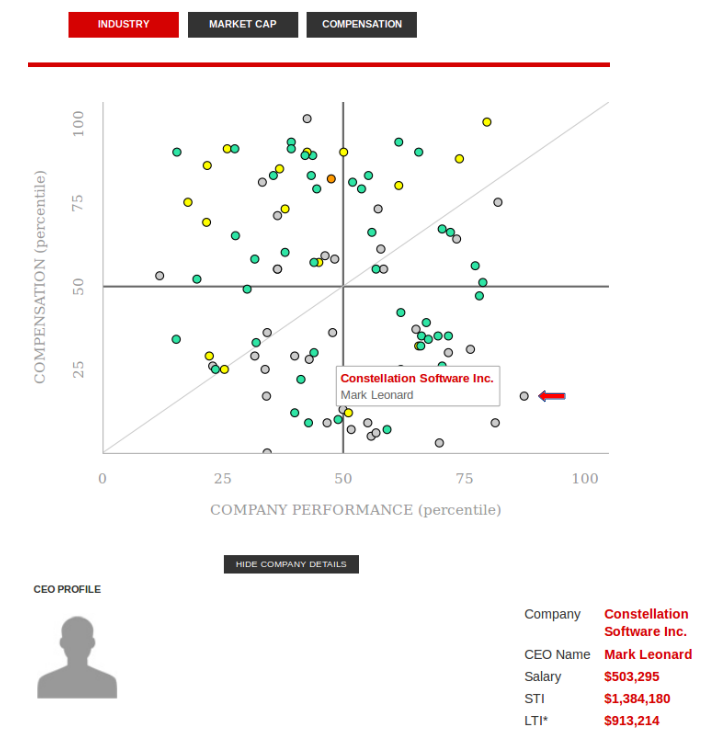 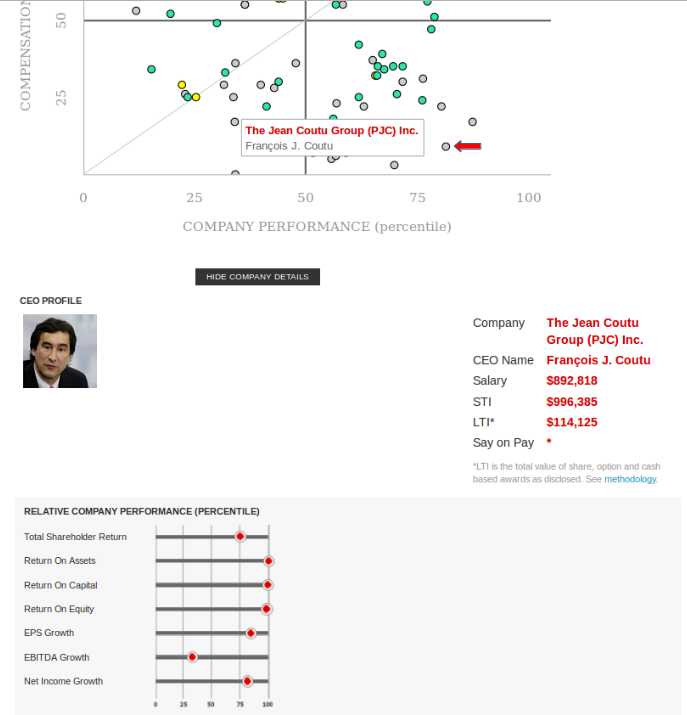 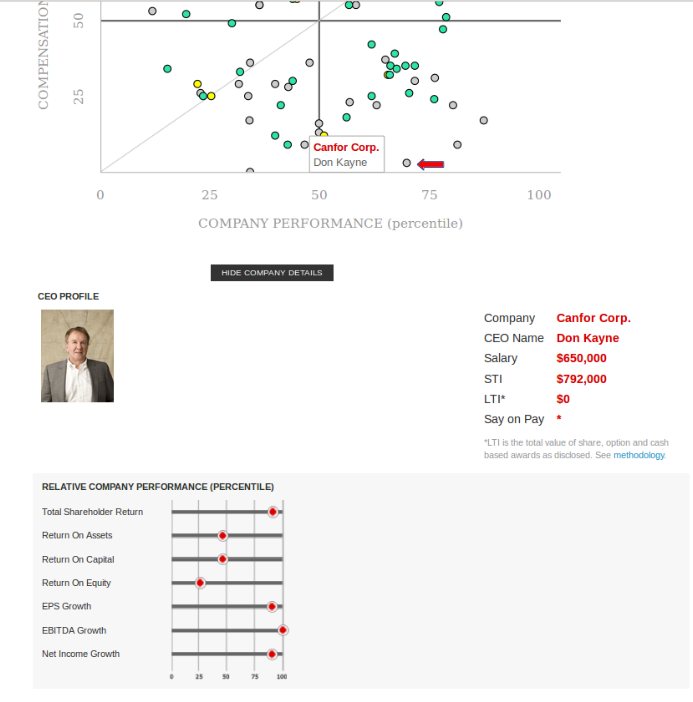 Using the same approach, here are fifteen other companies a good distance from the diagonal in the bottom right quadrant with a very investor-friendly link between CEO pay and company performance:

The top culprits here are: 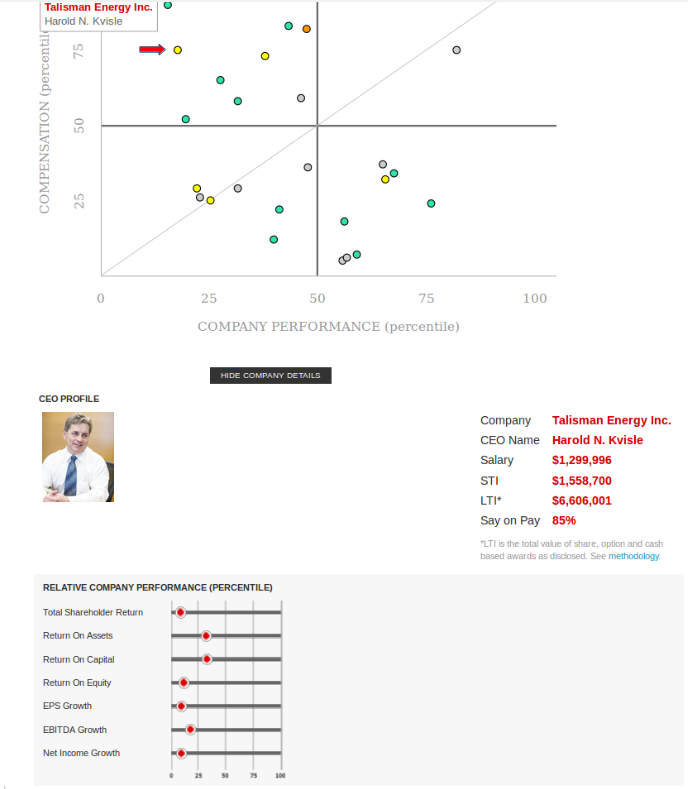 Gold mining CEOs - The price of gold may rise and it may fall but the CEOs of the gold miners are making buckets of money no matter what happens to the company or shareholders. Click on the Materials drop down selection and see the top left quadrant is filled with gold stocks and CEOs:
Other "heads I win, tails you lose" CEOs ....

Materials
Consumer Discretionary
Healthcare
This best vs worst list can be a help to company and stock analysis in determining which are well or poorly controlled by the Board of Directors. We have only discussed what we think are the best and the worst. The rest are somewhere in between. Being close to the median diagonal means a company CEO is being paid fairly, relative to peer performance.

Whether CEOs as a whole on average are too-highly paid is another matter (e.g. see the thought-provoking The World's Dumbest Idea paper by author James Montier, who argues long-term excessive CEO pay rises worldwide, not just in Canada, are a manifestation of the shareholder value maximization philosophy that serves investors and the economy poorly) and for consideration another day.

Disclaimer: This post is my opinion only and should not be construed as investment advice. Readers should be aware that the above comparisons are not an investment recommendation. They rest on other sources, whose accuracy is not guaranteed and the article may not interpret such results correctly. Do your homework before making any decisions and consider consulting a professional advisor.
Posted by CanadianInvestor at 10:09 No comments: