Is it Worthwhile to Wait for Higher Interest Rates to Buy an Annuity?

Payouts on annuities are at all-time lows these days. The same lump sum payment buys a much smaller lifetime income than it did ten or fifteen years ago. The main culprit is the steady fall in interest rates in the last few decades. Money that the insurance companies receive from investors and then invest themselves in highly secure bonds to back up the annuities yield a lot less so the insurance companies can offer less.

That situation may cause some people to wait for higher interest rates to get a higher payout on an annuity. How worthwhile is this? In our last post on annuity buying tips, Annuitize now, or wait?, in tip #7 we concluded that the basic answer is that if you need to start taking income, it doesn't make sense to wait. It is tough to beat the return required to beat the annuity. But that assumed that interest rates stay as they are. Suppose they rise, as has been expected for years now, though it has not happened yet.

Annuity payout rates will rise much more slowly than interest rates
Using the actual data from 2000 to 2013 on the Individual Finance and Insurance Decisions Centre in the Payout Annuity Index, we can see the steady drop in actual payouts on annuities as interest rates fell from around 6% on Government of Canada 10-year bonds to the 1.77% available as of 26 June 2015. Payouts on the way down can give us a good rough idea of what would happen on the way up. We found the payout for every 0.25% or so interest rate level and came up with the following graph. 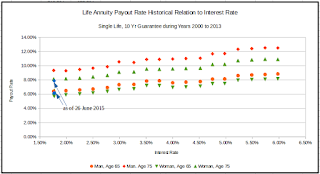 The graph shows how gradual the change in annuity payouts is compared to interest rates. A 4% difference in interest rates from 2% to 6% - a three times increase - produces only half that amount of change in payout, just over 2.3% from 6.5% to 8.8%.

Mortality credits, the return from people dying younger to those dying older, strongly influences the gentle slope of the graph points. As we noted in our previous post, interest return drives only part of the annuity income. Mortality credits are another large chunk. The 1.7% difference in payout rate between ages 65 and 75 also shows the powerful effect of mortality credits. It is much more worthwhile to look at getting older as a source of higher income than rising interest rates. And unlike interest rates, we definitely know which direction we are going in terms of age!

Continued rising life expectancy means the slope will be more gradual than the historical graph
The above graph over-states the steepness of the slope of changes to the annuity payout rate in response to interest rates. The reason is that life expectancy has continued to increase in the 15 years since 2000. The extra three or so years gained in longevity since 2000 means the insurance companies have to pay out for longer and so they offer lower monthly income. In addition, the insurance companies know about the actuarial projections which forecast a continuation of rising life expectancy. Since the oldest data and the higher interest rates are at the right end of the graph, that's where the greatest change in life expectancy has occurred and the payouts would be most reduced. The slope of the line is consequently reduced.

The relative attractiveness of annuities is greater at low interest rates than high interest rates
The higher are interest rates, the greater is the interest rate component of the annuity return versus the mortality credit component. The following chart shows the compression of the gap between annuity payout rates and interest rates / GOC 10 year bond rates the higher the GOC 10 rate. 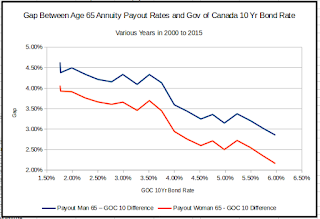 The investment funds that will be used to buy the annuity may be reduced by rising interest rates
If you as the investor waiting to buy an annuity hold a diversified portfolio of stocks and bonds, consider the reaction of those holdings to a rise in interest rates. For bonds, the answer is straightforward. They will fall in value. Investopedia explains how this works. The Duration metric indicates the sensitivity of a bond or bond fund to interest rate changes - e.g. as of 6 July 2015, the broad market Canadian bond ETF from BlackRock, the iShares Canadian Universe Bond Index ETF (TSX symbol: XBB) has a duration of 7.35 years. Thus, if interest rates were to rise 1%, XBB's value would fall about 7.35%. $100k of annuity money would drop to about $92,650. To recover that capital loss in XBB would require staying invested for the 7.35 year Duration (we described how this works in this post).  Meantime, for the annuity, that interest rate rise, judging roughly by the graph above, might bring about a 0.5 to 0.6% higher income payout. That's a much smaller gain than the XBB loss. In addition, XBB's return, aka yield, is only 1.65% net of fund expenses (1.98% portfolio yield minus 0.33% MER).

There are many shorter Duration, less interest-sensitive funds around, such as BlackRock's ETF with trading symbol XSB, but returns are even lower, such as the 0.8% net of expenses for XSB.

Stocks are usually also hurt by rising interest rates, especially in the short term, though in the long term, the businesses do adjust and stocks do ok. The price reaction of stocks and stock funds is much less predictable and more variable than for bonds, as we previously described. The investor is left with considerable uncertainty and the annuity purchase becomes very dependent on market conditions for the best annuity purchase timing.

Perhaps the best alternative waiting time investment is cash, whose value is completely insensitive and oblivious to interest rate changes. A High Interest Savings Account today can earn up to 1.95% (though the deposit protection may be less than the best, which is CDIC's). HISAs at major institutions with CDIC deposit insurance coverage currently earn about 1.0%. Nevertheless, while interest rates are steady, the opportunity cost metric Implied Longevity Yield, which we described last post, handily beats that return.

How long can you wait?
The final element to think about is how patient you can manage to be. In our previous post on which bond ETFs are most susceptible to interest rate changes, we wrote "Interest rates will inevitably rise when conditions improve, the only question being how soon that will happen. Be ready!". That was in 2010 - almost five years ago! It's a long time to hold one's breath. In the interim, the annuity payout rate for a female single life 10-year guaranteed RRIF-funded annuity fell from 6.7% to 5.7% as interest rates fell, instead of going up.

In short, waiting for rising interest rates likely is not worth it. Waiting while you get older is a better way to think about it.  But if you need to draw income and you can cover you can cover basic needs with an annuity even at today's low rates, it's likely not worth waiting at all.

Copyright 2015 Jean Lespérance All Rights Reserved
Posted by CanadianInvestor at 11:05 No comments: