October 2016 Update: Little has changed since last year and since the original 2013 post. The various equity ETFs continue to power ahead of bonds, both in terms of total returns and of cash distributions. Thankfully, all the ETFs, including bonds, are handily beating inflation. Many would think of bonds as sources of steady cash but ironically, the positive return for the bond ETF (symbol XBB in the graphs) has come from capital gains. Financials still rule, far outstripping the other types of ETFs and the average market in cumulative total return over the past five years. Energy has continued to be a severe disappointment for investors, not even managing to outdo inflation.

The updated charts are as follows:
1) ETFs with the longest history back to 2002 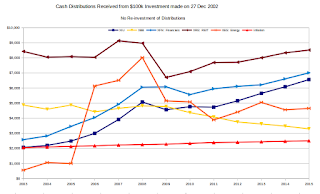 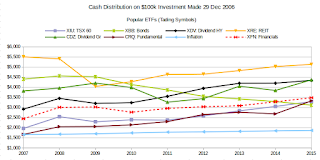 3) Returns and table of cash distributions 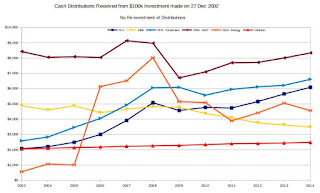 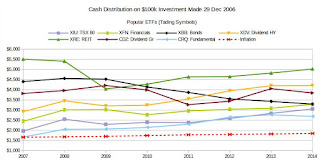 Returns matter too ... and that changes the overall picture. The table below for the same ETFs shows the overall change in cash distributions along with the annual compounded total return (distributions plus capital gain or loss) for the five years up to 30 Sept 2015 for these ETFs.
(click to enlarge)

First, we note that XBB's results are not all bad - its total return has been positive despite falling cash distributions. Next, we see that XEG's returns have been strongly negative to go along with the fall in distributions. Energy has been a very poor investment. It has done worse than inflation, unlike every other ETF, both bonds and equities. Ironically, one ETF with weak growth in cash distributions - CDZ - is the one explicitly targeting companies that have shown strong dividend growth. The ETF seems to pick up companies after they have had a burst of increases, a fine example of past results not necessarily being indicative of the future. Neverheless CDZ's total return has been very strong, second best overall. The clear overall winner has been the financials - the XFN ETF has had both healthy cash distribution rises and excellent capital appreciation to produce an outstanding total return of 9.3% per year compounded.

The Original article ...
Back in January (2013) we looked at the cash distributions of a few mainstream Canadian equity ETFs and made the pleasant discovery that such income was quite stable from year to year in recent times despite the often gut-wrenching moves of the ETF's price in the market. That is very pleasing to know for long term buy and hold investors who are seeking income, such as those in retirement. It was doubly pleasing to see that the equity ETF distributions were as stable as those of a broad market bond fund. A third attractive feature was that the distributions of the equity ETF had risen appreciably during the 2000s decade while that of the bond fund had declined as interest rates fell continually through the period. Today we return to this theme to find out more - how specific industry sectors like financials, energy and real estate (REITs) have fared and what the longer term history of dividends can suggest about the likely future.

Equity ETF cash distributions generally rose ....
The chart below shows how distributions per unit / share have evolved from the inception of each of the following ETFs.
Immediately we notice that the gap between per share payouts on the bond ETF, the yellow line, and the various equity funds has narrowed considerably over the years. 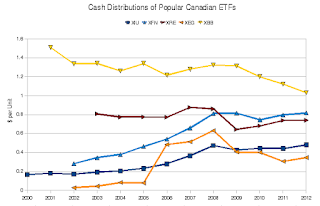 ... but the progression has been uneven amongst sectors
The orange line of the energy ETF XEG is up over the long term but it has seen wild upward then drastic downward movement, not very attractive to anyone seeking steady cash income.
The dark red of the REITs XRE started quite high but there was a big drop during the financial crisis with some recovery since but the overall income level is slightly down from its 2003 start year. That's a surprise for a sector that is often portrayed as a steady high-income investment. We explore more why this happened below.
The mid-blue line of the financials in XFN is the best performer of the lot. Another surprise is that it took the least hit during the financial crisis. The big banks merely held their dividends steady for a few years then started boosting dividends again. Now the sector has recovered all the lost ground and is at a new peak.
The broad TSX 60 XIU fund, which contains a large dose of financials and energy as well as other sectors like mining, industrials and utilities for which we do not have data, has gone steadily but slower ahead overall. The ETF with the broadest diversification across economic sectors has had the steadiest payout record.

Equities look even better on a total income basis
Another way to look at the past distribution performance is to pretend we had invested a large lump sum ($100k) at the end of the year 2002 and simply collected the cash payouts. We ignore total return and do not calculate any re-investment of the distributions. The distributions are real cash in the investor's hand, net of any management and administrative fees. The chart below shows what would have happened. 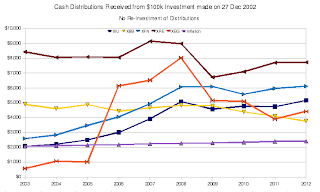 The REIT fund XRE started well ahead of the pack and is still way ahead after 10 years but its lead has narrowed considerably. And it has lost ground to inflation (shown by the purple line), as has XBB, due to falling total distributions (NB again that we are only considering the cash distribution part not the total return of the fund where capital gains might have made up for the declining income). From second highest total cash received in 2003, the bond fund XBB would now trail all the equity funds.

The erratic path of XEG might have caused many investors heartburn even though overall the net increase in distributions since 2003 has far outstripped inflation. The financials XFN and the mixed equity XIU have followed quite a parallel path, though XFN has inched ahead.

Why did REIT distributions fall so much?
The answer is that a few REITs with a heavy weight in XRE cut their distributions during the financial crisis, most notably H&R (HR.UN) and Chartwell (CSH.UN) while another, Dundee (D.UN) made no increase. All the other big REITs had increases, most of them quite healthy e.g. from 2003 to 2012 RioCan (REI.UN) +21% total increase in cash distributed, Canadian REIT (REF.UN) +20%, Calloway (CWT.UN) +35%, Cominar (CUF.UN) +25%, CAP REIT (CAR.UN) +2%, Boardwalk (BEI.UN) +52%. When we note that XRE contains only 14 REITs the influence of one or two holdings can be significant. Cuts in distributions are not typical of the sector.

For investors looking at direct holding of REIT units instead of a fund, the past history is a reminder to closely consider the sustainability of the REIT payout - is the REIT distributing more cash than it earns? Chartwell is still having big problems with large net losses. H&R seems to have steadied the ship somewhat and has increased distributions since 2009 but the 2012 payout was still 10% below that of 2003 and it has more debt and lower return on equity than the other major REITs.

Will the equity ETFs continue to outgrow bond ETF cash distributions?
The investing landscape has been changing fast recently as interest rates, long kept at record low levels by central banks, have started to rise dramatically (see Bank of Canada's charts of various benchmark bond rates). As a result, bond prices have fallen and it is now much cheaper to buy into XBB. Anyone buying in at the current price (as of 26 June 2013) with a lump sum, such as we pretended to do in 2002 would get a 3.23% cash distribution yield from XBB according to its iShares webpage. By fluke, it so happens that XIU's current cash distribution is exactly the same 3.23%.

XIU distributions will evolve with economic growth and earnings growth
Equity ETF distributions are driven by the dividends paid by companies held within the funds. There is good historical evidence, some of which we linked to in our first post back in January, that dividends on broad market indexes do rise over time and do also handily outstrip inflation. Unless economic growth stops entirely, companies no longer grow earnings and dividends cannot grow too, we do not believe cash distributions of funds like XIU will stop rising. For example, Thornburg Capital's The Benefits of Dividend Paying Stocks shows much the same exercise as our pretend investment of $100k in 2002 but for the USA's S&P 500 going back to 1970. The results in their chart, copied below, look very similar overall, though we notice that there was a much bigger hit to dividends from the 2008 financial crisis. The results of sectors may vary but the overall market should grow over the years. 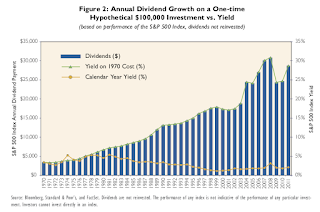 Bottom Line: Equities, especially broad-based ETFs such as XIU (and there are multiple others from other providers such as BMO, Powershares, Vanguard) present the income-seeking investor with an attractive combination of cash distribution stability and long term growth.

Copyright 2015 Jean Lespérance All Rights Reserved
Posted by CanadianInvestor at 05:14 No comments: