How to Calculate Interest and Capital Gains for Tax on Bonds, T-Bills, GICs, CSBs

The April 30 deadline for filing a personal income tax return is not that far off (see list of this and other tax deadlines from the Canada Revenue Agency) so it is a good time to talk tax. Today, we discuss common types of fixed income.

Not everyone holds fixed income investments in tax-free or tax deferred accounts such as a TFSA, RRSP, RRIF, LRIF, LIRA, RESP etc, though one should do so if at all possible. When fixed income is held in a taxable account, the income must be reported every year. Some calculation and reporting is easy and some is fairly intricate.

Misconceptions - First, let's clarify a few points about fixed income that might lead people astray.
Guaranteed Investment Certificates (GICs) and Canada Savings Bonds (CSBs)
Tax reporting is easy. The financial institution where such investments are held sends you a T5 with the correct amounts to transfer onto your tax return. In the case of compound GICs or CSBs, where the interest cumulates and is only paid at maturity, you still must, since you are legally entitled to receive it, report the income year by year as if you had received it, and the T5 includes it.

In the case of cashable or escalating GICs where you may receive a lower rate of interest if cashed in early, the interest is reported year by year as if you were holding to maturity. If this maximum rate is not achieved, then the loss difference is reported as negative income in the year it happens.

CSBs and GICs never have a capital gain or loss since you always receive back the exact principal amount invested.

Coupon Bonds
The most common type of corporate and government bond bears interest coupons that are structured to be paid twice a year six months apart. Since current required rates of return or yields fluctuate constantly and never exactly match the coupon interest rate, coupon bonds will produce both interest income and a capital gain (or loss) whether held to maturity or sold before maturity.

Two situations are possible when buying a bond. In one case the bond asking price from the broker is above the standard $100 par value, which is when the coupon interest rate is above the current yield. That is the case today for almost every bond on the market as current record low interest rates have increased the value of bonds issued in past years far above their initial price. These are called premium bonds. The other case is the opposite - bond price below par and bond coupon interest below current yield - and such bonds are called discount bonds.

The best way to explain how the taxes work is to use examples.

Premium Bonds
Click on the image below to enlarge the spreadsheet.
Our example bond is the Government of Canada bond with a 5% coupon paid twice a year on June 1st and December 1st as 2.5% (half of 5%), or $250 of interest on our supposed purchase of $10,000 worth (called face value) of bonds. Since the coupon rate is far above current interest rates on offer, manifested as the 1.999% yield, the price of the bond per $100 of par face value is, not surprisingly, much higher at $109.313. If we place our order on March 11, 2011, the cash and ownership trades hands three business days later on March 16th, the settlement day. 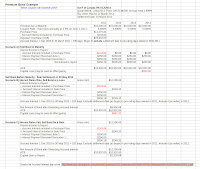 Part of the total price to pay for the bond is the interest owing from the previous regular payment date, in this case December 1, 2010. This $143.84 of accrued interest is important for taxes. The amount of accrued interest is pro-rated as the number of days times the per-day coupon rate, in our case 5% x 105 days/365. From an investment return point of view accrued interest matters only as a question of timing of cash flow since the $143.84 that we pay out to the previous bondholder is recouped on June 1st when we receive the full $250 in interest, not just the portion earned while we have owned the bond. Discount brokers will normally show the accrued interest on the online quote and the trade confirmation sent to the investor. In counting days of interest, a buyer excludes the settlement day, while a seller includes it (see section 3.3 in Canadian Conventions in Fixed Income Markets).

Interest Income
Capital Gains
Discount Bonds
Click on image to enlarge spreadsheet.
Our discount example was hard to find - the Government of Canada 2% coupon maturing 01 June 2016. The coupon is slightly below the 2.45% yield so the price is $97.88 per $100 par value. 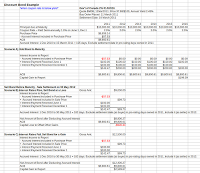 Tax Calculations:
The rules are, of course, exactly the same as for premium bonds regarding calculation of interest income and capital gains. The spreadsheet works through the numbers.

What is important is the fact that the discount bond produces a lot less of its return in the form of interest than a premium bond. Some of it is capital gains and that is deferred until maturity or sale. (Note that a capital gain is not guaranteed if interest rates rise in the interim before sale, as our Discount bond scenario B shows.) The fact that a premium bond naturally produces a capital loss for taxes in effect means that it generates too much interest income. The investor ends up paying more in taxes. A discount bond is thus inherently better than a premium bond from a tax point of view. TaxTips.ca constructs a hypothetical example that shows how much tax advantage a discount bond can have over a premium bond with the same yield. TaxTips' recommendation makes sense: in a taxable account, to minimize taxes, choose the bond with the biggest discount.

Possible Future Opportunity - Interest rates / yields are still at long time lows. When they inevitably sooner or later rise, bond prices will fall. There will be many more discount bonds. If interest rates rise strongly, the discount will be even higher and longer maturities will experience the greatest price fall. A greater and greater part of the return on bonds will consist of capital gains, deferred till maturity or sale. That will reduce taxes for the investor. For investors who do not need the income flow, discount bonds could become a very tax-effective holding, especially highly secure Government of Canada bonds, which also tend to have the lowest coupon rates.

Treasury Bills
T-Bills do not pay any interest. Their return comes from being purchased at a discount to the standard par maturity value of $100 per T-Bill (though the minimum purchase amount at discount brokers is usually $5000). The return when held to maturity is considered to be interest by the CRA. Since by definition T-Bills always mature within a year, the easiest way to account and report the interest is for the tax year the T-Bill matures, though the taxpayer / investor could choose to accrue part of the interest, following the method explained below for Strip bonds, in each tax year for T-Bills that straddle two tax years. The broker does not report on T-slips the interest. The broker reports the proceeds of disposition on a T5008 slip. It is up to the investor to do the step of subtracting the ACB to net out the interest.

Strip Bonds
Strip bonds are created when investment dealers or other financial institutions take normal bonds and separate (i.e. strip) each interest coupon and the principal into individual securities that can then be bought by individual investors. For detail on how strip bonds work including tax treatment, see the excellent Strip Bonds Information Center by financial industry insider Keith Campbell.

The essence of taxation is the same as for Treasury Bills. There is no on-going cash flow but the CRA forces tax to be paid each year based on the implicit return an investor receives, which is the yield to maturity at purchase. The return is considered to be interest income for tax purposes, which attracts the highest marginal tax rate. The fact that taxes have to be paid every year at the rate for interest income, while the investor only receives the cash return up to decades later, is the reason strip bonds make most sense in a tax-deferred / tax-free account.

Our example spreadsheet below works through the tax calculation for a strip Government of Quebec maturing 01 June 2014 with a quoted yield of 2.306%.

Tax Calculations:
Disclaimer: this post is my opinion only and should not be construed as investment or tax advice. Readers should be aware that the above comparisons are not an investment or tax recommendation. They rest on other sources, whose accuracy is not guaranteed and the article may not interpret such results correctly. Do your homework before making any decisions and consider consulting a professional advisor.
Posted by CanadianInvestor at 04:52