For investing purposes, retirement is when a portfolio is steadily and systematically drawn down over many years. Retirement presents particular challenges and risks for the investor, most critically:
Different types of investments may be beneficial or harmful to the retiree in meeting these challenges. For instance, equities provide higher long term returns than bonds, and are thus better protection against running out of money, but as was evident in the 2008 crash, they can be highly volatile, which increases sequence of returns risk. Bonds, cash, GICs and other fixed income on the other hand, are much less volatile but their value is susceptible to inflation and they may not provide adequate returns to ensure long term health of the portfolio in real terms. What lessons arise from such realities? 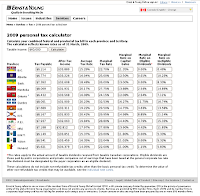 Posted by CanadianInvestor at 06:59 No comments:

This second part of a two part post on ways to hold bonds in a portfolio looks at Bond Funds. Part 1 looked at the Bond Ladder.

Bond Fund
A bond fund holds a collection of bonds. There is a wide variety of investment policies and bond mixes to choose from. Some are passive and indexed, holding a representative sample of the overall market. Some are actively managed attempting to achieve extra returns from trading and anticipating corporate changes or interest rate shifts. Some funds are specialized in government or corporate bonds, some have US or international holdings, others have short duration bonds and still others focus on high yield high risk debt. All charge an annual management fee.

Advantage to the Fund:Where to Find

Posted by CanadianInvestor at 10:00 No comments:

Bonds, or fixed income, have a place in every portfolio. Two ways to hold bonds are in a fund, either an ETF or a mutual fund, or in a ladder of individual bonds. How do the two methods compare? This post looks at advantages of the Ladder approach while Part 2 will review the advantages of Funds.

Bond Ladder
A bond ladder (more detailed explanation on Investopedia) consists of a series of bonds that mature at staggered, regular intervals, often chosen to be about one year apart. They can be bought online at many discount brokers, though it may be necessary to phone and speak to a representative. The bond price includes an implicit one-time fee charged by the broker - i.e. the bond's price is slightly higher.

Some discount brokers have a better inventory and wider selection of bonds. BMO Investorline seems to have a good inventory from the experience of this writer but check around. The embedded commissions can also vary between discount brokers.

Advantage to the Ladder:
Where to Find

Posted by CanadianInvestor at 06:27 3 comments:

Controlling Your Own Investing Over-Confidence

Question: What’s the difference between God and an actuary?
Answer: God doesn’t think he’s an actuary
This old joke (quote above taken from Making Actuaries Less Human) has appeared with many substitutes for the word actuary. And with good reason because overconfidence in one's abilities, knowledge and judgement is a widespread tendency among humans as academic research (see citings in the above article) have confirmed time and again. Investors are no exception (not even professional investors and analysts) - for proof, read excellent books like Richard Deaves' What Kind of Investor Are You? and Terry Burnham's Mean Markets and Lizard Brains or references on the Overconfidence page of BehaviouralFinance.net.

Investors over-estimate their knowledge, under-estimate risks and exaggerate their ability to control events, including their own reactions. The result is bad decisions that lose money - excessive trading, taking on too much risk, under-diversification, over-estimating possible returns, thinking a bad outcome can't happen, panic selling.

What to do to Control Overconfidence?
Simply saying to yourself "I won't be overconfident" isn't likely to work. Specific techniques are required. Here are some techniques to try:
As the actuaries recognize, we cannot stop being human, we can only take steps to minimize and control overconfidence. At least we can avoid being the cat in the photo "This is going to end in disaster, and you have no one to blame but yourself" from 2FlashGames.com. 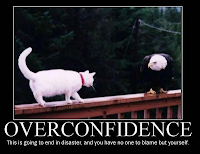 Insider Trading: Using It to Get an Edge, Legally of Course

Insider trading - the illegal kind
Stock trading by insiders - the top management and directors of a company - normally makes the headlines when the insiders exploit their inside knowledge to unfair and illegal advantage by buying or selling based on material information that is not publicly available. Securities regulators and police step in to bring criminal charges with fines and possible prison as sanctions. CBC's "Insider Trading - What's the problem?" explains in more detail about illegal trading.

Legal insider trading - why should an investor care?
Stock ownership by a company's top executives is desirable for public investors - it aligns their fortunes with ours. Insiders are allowed to buy and sell shares of their own company and they are allowed to, and do use, within the rules, their intimate knowledge of the company to their advantage. Paying attention to what they do is worthwhile.

The rules require insiders to disclose both their holdings and their inside trades. When doing research on a company to decide whether to buy or sell shares, an investor is well advised to check out both aspects of insider stock ownership:
Where to get insider trade info

Posted by CanadianInvestor at 08:12 No comments:

Dividend stocks are an attractive proposition these days for several reasons, though such attractions are always tempered by potential downsides.

1 - High Yield
Despite the tremendous drop in share prices many solid companies are still making profits and are continuing to pay out some of those profits as dividends. As a result the return from dividends alone, defined as the Dividend Yield (the annual dividend / current price as a percentage) has gone up to historically high levels. For instance, Bank of Montreal shares (symbol BMO) are paying out $0.70 per quarter or $2.80 per year, which yields over 5% on recent prices around $51 per share. The iShares TSX 60 Index ETF (symbol XIU), a combination of the 60 largest companies on the Toronto Stock Exchange yields about 3%.

Risk: The big unknown is whether the dividends will be maintained or cut in response to the recession. Companies may state their intention to keep paying out but the investor is wise to check outside commentaries, read financial reports and form an independent opinion.

Tax Advantages
When investing in a non-registered taxable account, one needs to be aware of how income taxes affect dividends. There are strong pluses but a few caveats and potential downsides exist too.

2 - Low(est) Tax Rate Type of Income
For all but taxpayers in the highest income brackets, dividends have a lower tax rate than interest and capital gains. The effect is most pronounced at lower income levels and peters out in most provinces as taxable income (total income, employment earnings plus investment income minus deductions like RRSP contributions, child care, moving, education, union and other expenses) exceeds $70,000, though that varies considerably by province. Some like Alberta, Ontario and BC still show a much lower tax on dividends at $100,000 income while in Nova Scotia the superiority ends at around $90,000. Enter your 2008 income in the Ernst and Young Personal Tax Calculator to see what it is for your province.

3 - Extra Dividends Can REDUCE Taxes for Lower Income Taxpayers
Tax rates on dividend income are less than zero, i.e. negative for the lowest tax bracket of $36-37,000 (in 2009) in most provinces, except Nova Scotia and Newfoundland at c. $30,000 and the real outliers of BC at $71,000 and Quebec at $0. Detailed tables are available at TaxTips.ca's Provincial Personal Rates page. When filling in your tax form, there is a dividend gross up and tax credit that can offset other income taxes so that you end up not paying any tax on the dividend and paying less on other income. TaxTips.ca explains with an example here.

Tax professional Tim Cestnick wrote a column titled How to take advantage of the dividend tax credit in GlobeInvestor in which he noted that a BC taxpayer with no other income but dividends could earn up to $70,000 without paying tax. TaxTips.ca shows how much in dividends could be earned tax-free in other provinces.

Risks: Several realities may temper the benefit of the "use dividends to get tax-free income" idea.
The above is for information only and is not to be construed as advice. When in doubt consult a professional to ensure you get it right.
Posted by CanadianInvestor at 09:15 No comments: