The 2008 Crash - Case Study in Diversification

Diversification is meant to help protect a portfolio by combining asset classes that do not move in tandem, that move in different directions in a particular time period, for example by moving sideways or up while another is going down (though over the longer term, all investments would be expected to move up, otherwise why would anyone invest in them?). The year 2008 witnessed huge drops of about 35% in the TSX in Canada and the S&P 500 in the USA. How well did various asset classes perform as a diversification tool? Did any go in a different direction, making a lie of the feeling that everything plummeted?

A few charts from Google Finance give us a pretty good idea: 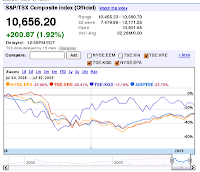 No diversification help at all - paralleled the TSX very closely and fell just as much
Fair diversification effect - dropped some but not nearly as much as the TSX
Chart 2 - Corporate, Government and Real Return Bonds 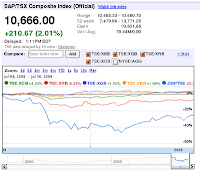 Superb diversification effect - did not fall and even rose a bit, which is a bit hard to see since the huge drop in the TSX compresses the scale so much

Hello,
Thank you for a very useful article.
It is really true that investing in real estate is from long-run view the most profitable action, but we cannot underestimate diversification factor, as we witnessed in 2008.