Indices
There are several providers used by the various ETFs to construct an index to represent the countries and the companies to include, just as the S&P TSX Composite is used to benchmark the Canadian equity market.

Why Emerging Markets?
Growth: Emerging Markets countries are harder and harder for the Canadian investor to ignore. In July Bloomberg reported that Emerging countries now constitute 24% of world equity market capitalization, up from 18% from only the start of the year. EM stock markets have bounced back much more strongly from the 2008 crash during 2009 than any of Canada, the USA or Europe.
Diversification: Not only have such countries offered faster economic growth and stock appreciation than developed countries, they offer Canadian investors companies in sectors weakly represented in Canada's TSX equity index, such as information technology, health care, industrials and utilities. As a result of the different industry structure, economic policies and exchange rate fluctuations, the equity returns from these countries do not move in perfect lockstep with Canadian or US returns, allowing an investor to construct a more stable portfolio by including such holdings.
Risks: EM countries are less stable economically, less well regulated financially and more prone to corruption and other problems that make stock investing riskier. The swings of their stock markets, individually and even as an group, have been much more pronounced, which is the prime reason to reduce risk through an ETF with many company and country holdings and to not go overboard as a proportion of portfolio.

ETFs Traded on US Markets
The largest and best established ETFs available to Canadian investors are traded on US markets. Though that means they are denominated in US dollars (USD), the real currency exposure is, since none are hedged against currency shifts, to the combination of all the EM countries, not the USD (see CanadianFinancialDIY's explanation). The list below includes only broad market ETFs. There are many others available, ranging from individual country funds, to groups of countries (e.g. BRIC), to leveraged bull and bear funds - see the Stock-Encylcopedia's Emerging Markets list. 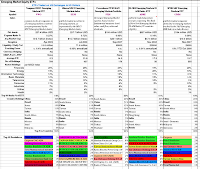 That's already a good selection of Emerging Market ETFs for the Canadian investor to choose from. The next post will review the Canadian-traded ETFs.

Disclaimer: this post is my opinion only and should not be construed as investment advice. Readers should be aware that the above comparisons are not an investment recommendation and that past performance may not continue, costs may change and other comparative factors like taxes may alter their value to you. Do your homework before making any decisions.
Posted by CanadianInvestor at 04:08