CleanTech & Profitable Investment - Yes, the Two Can Go Together

Clean, green technology may be the way of the future but is it possible for an investor to find solid profitable companies in the burgeoning sector? For many, the debacle of the dot com era, where start-up companies galore without profits (or sometimes even revenues) achieved stratospheric stock prices, only to have it all crash and burn into cinders, is an all-too-painful reminder that an emerging sector can pose great danger.

Let's take a look at the 19 members of the S&P/TSX Clean Technology Index (see link on this page)"... whose activities provide value-added solutions to environmental problems". The Index members are not tiny start-ups - S&P selects only companies with C$100 million or more in market cap with enough stock trading volume and shares outstanding available for trading to be reasonably liquid.

Eliminating The Unprofitable Companies
By clicking on the stock symbols in the Constituent Companies list and then the Financials tab for each company on the TMX Money website, we are able to quickly see that these companies have chronic and/or repeated big losses:

These companies may eventually be highly profitable and for many hope springs eternal (which some of the stock price charts for these companies suggest!), but for now, we say, no thanks and move on to the proven performers.

Nine Profitable Clean Tech Companies
More than half the profitable (i.e. positive Net Income) group consists of renewable hydro and wind power generation firms:
These companies are characterized in most cases by long-term electricity sale agreements. Barring major weather or equipment problems, they should continue to generate as much profit as power. The healthy dividends most already pay confirms that capability.

Two of the power companies - Macquarie and Brookfield - have yet to convert from the income trust structure to corporations, as they are being in effect forced to do by the federal tax change (see previous posts on this topic here and here) to take effect January 1st, 2011, but both Brookfield and Macquarie have announced the intention to convert. When that happens they will likely reduce cash distributions by about a third.

One power company - Boralex - is an interesting case. Boralex Inc has been in the throes of a takeover attempt (apparently likely to be successful under revised terms) on the similarly-named but separate income trust Boralex Power Income Fund, which has its own listing under BPT.UN and has not not been profitable.

The other four present a range of CleanTech sectors:
Summary of Key Financial Ratios (source TMX.com)

Market Action
None of the profitable CleanTech stocks has exactly been a market darling powering to lofty heights over the past five years as all but one stock - WaterFurnace - has done no better and in most cases much worse than the TSX Composite. However, over the past year the chart below shows that four of the power companies have done considerably better than the TSX Composite. WaterFurnace itself made all its gains in 2006; in 2009 -2010 it has seriously under-performed, falling while the TSX has risen. It seems that there is no GreenTech bubble so far. 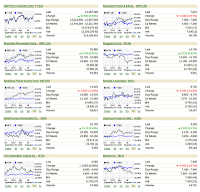 Several of these stocks, notably Macquarie, Algonquin, Waterfurnace and perhaps Newalta, exhibit reasonably attractive combinations of low P/E, low P/B and growing dividends, enough perhaps to make them candidates for a potential buy. The final judgment as to whether any of these stocks is worth an investment needs to rely on much more than simple past profitability or ratios and a thorough examination of financial reports and each company's prospects would be the next step for the investor.

However, it is encouraging to know that clean technology companies can be considered more than a politically correct fad. Some do indeed appear to have credible investment potential.

Disclaimer: this post is my opinion only and should not be construed as investment advice. Readers should be aware that the above comparisons are not an investment recommendation. They rest on other sources, whose accuracy is not guaranteed and the article may not interpret such results correctly. Do your homework before making any decisions and consider consulting a professional advisor.
Posted by CanadianInvestor at 10:21

Reader Diane sent an email asking about MPT.UN's distribution and whether it will be reduced. Good question!

The company has stated and still asserts (I asked them again) that it can and will maintain the distribution at present levels of $0.66 p.a. after conversion to a corporation in December 2010. The composition of the distribution for tax purposes by dividends, income, return of capital will change inevitably and that may affect net investor returns in a taxable account. The "other income" amount, which made up more than half of total distributions in 2009 according to the T3 (http://www.macquarie.com/mpt/mpt09_t3_form.pdf), will probably (my guess) change to dividends.

Another follow-up on MPT.UN ... the investor relations folks say that the 2010 distributions will be an estimated 15% return of capital. Assuming the ROC stays around the same, in 2011 most of the distribution will be dividends eligible for the dividend tax credit when held in a non-registered account.