GIC vs Tax-Advantaged Bond ETF - Which is best in a taxable account?

Situation: You have maxed out your RRSP and TFSA accounts and you want to put some fixed income in a taxable account, perhaps because your total portfolio asset allocation calls for it, or you simply want to receive the income to spend. Let's compare two options to do it, the well-known GIC against a specialized ETF oriented to this situation offering tax advantages.

1) Guaranteed Investment Certificate (GIC)
2) iShares Advantaged Canadian Bond Index Fund (TSX symbol: CAB)
CAB is quite complicated and its workings are well explained in a fine series of posts by Canadian Couch Potato in which he explains the structure that utilizes a forward contract, the costs and risks and how the cash payout mechanics work.

GICs offer a better return than CAB at the moment
Our comparison, based on a five year investment, shows that despite the tax advantages, the yield on CAB is too low, by almost 0.5%, to beat out GICs. The main reason is the more or less fixed costs of MER and forward fees. As our table below shows, CAB would need to yield at least 1.65% to equal GICs paying 2.45% annually. That is even assuming that taxes on CAB's returns were deferred till the end of the five years. As the Distributions tab on the iShares website shows, indefinite deferral has not been the case throughout CAB's short life since 2009 startup - its distributions in 2010 were not ROC but capital gains. The fact that a strong equity market can trigger the shift from ROC (an explanation related in Couch Potato's payout mechanics post) tells us to expect occasional future episodes of the same. (It is an interesting thing to note that BlackRock has an incentive to pick the worst stocks for the equity portfolio so that it will have no capital gains and only return of capital!) Thus CAB would need to pay out an even higher rate to compensate for taxes to be paid sooner. 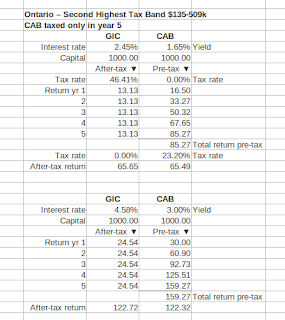 If interest rates start to rise, CAB will become more competitive
The corollary of CAB's fixed costs is that as interest rates go up and CAB's yield rises, GIC s will need to provide a much bigger interest rate spread to keep ahead. We have illustrated this in the lower part of the table where GICs would need to offer 4.58% to breakeven with a net 3.0% yield in CAB. The higher interest rates rise, the more the effect of the tax rate difference. The higher your tax bracket and the higher the tax rates of your province, the greater the effect as well. To figure out the breakeven point, the above table can be used substituting the relevant current numbers.

Disclaimer: this post is my opinion only and should not be construed as investment advice. Readers should be aware that the above comparisons are not an investment recommendation. They rest on other sources, whose accuracy is not guaranteed and the article may not interpret such results correctly. Do your homework before making any decisions and consider consulting a professional advisor.
Posted by CanadianInvestor at 16:57