What Happens to a Bond ETF When Interest Rates Rise?

From late May to mid June market interest rates took a relatively big and sudden jump upwards, anywhere from 0.5 to 1.0% across various bond maturities, as these Bank of Canada rate charts show. There was an immediate and appreciable effect on bonds and bond ETFs. After years of declining and ultra-low interest rates, the landscape may be changing for investors so it is opportune today to try looking forward and see how further rises might effect bond investments.

We'll focus on one ETF as a specific example - the iShares DEX Universe Bond Index Fund (TSX symbol: XBB) to work through the effects on several key elements of  bond fund performance:
Cash Distributions
Despite the recent increase in interest rates, the amount of cash being distributed every month by XBB is likely to continue dropping slowly, as it has done for the last ten years (see our post of June 28th with its graph of XBB's cash distributions per share). Until the return required from bonds goes up another 0.6% or so and stays at least that much higher for a considerable time, we believe several factors will combine to keep cash payouts on the decline.

XBB has enormous inertia
The first factor is sheer inertia due to the huge number of holdings in XBB - 735 according to its Overview tab. Change will take place slowly as the ETF's mandate is to passively track the DEX Universe Bond Index, which is the broadest index of investment grade bonds, and not to trade actively. Even though there is constant monthly rebalancing as newly issued bonds are added and some of the existing bonds exit, the monthly change is a small proportion of the total holdings.

New bond bond coupon rates match current interest rates
The second factor is that new bonds issued by governments and corporations will pay a coupon closely aligned to prevailing interest rates. In other words, bonds are issued as close as possible to $100 par value, give or take daily market movements around the actual day of issuance, and the coupon is about what investors expect as the return - e.g. see how succeeding  bond issues by the Government of Ontario for a seven year term to maturity had progressively lower coupons from 3.15% to 3.00% to 1.65% between 2010 and 2012 but they were always priced near $100.

Coupon rates of existing bonds in XBB are higher than required yield, therefore ...
Right now, on average, new bond coupon rates would still be below the vast majority of the bonds held by XBB. The return required by investors for XBB's bond portfolio is shown by the Weighted Average Yield to Maturity, which is 2.64% as of July 9th per the same Overview tab page. New bonds will, as an average, be entering XBB with coupons at about 2.62%. Meanwhile XBB's Weighted Average Coupon (same page) is 3.86%. Unless the bond market changes drastically and a disproportionate amount of long maturity bonds and/or from higher paying corporate issuers suddenly appear on the market, skewing entrants to XBB on the high coupon side, new bond issuance will still work to lower XBB's average coupon, and consequently its cash distributions. XBB is obliged to distribute all its interest income to share owners to avoid being taxed so the coupon interest drives the cash distribution level down as well.

Share Value
The immediate short-term effect of the rise in interest rates starting from the beginning of May has been a downward hit to the share price of XBB as the Google Finance chart below painfully shows. 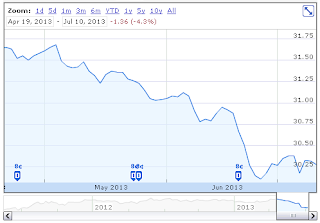 The sensitivity of XBB's price to changes in interest rates is indicated by a variable called the Duration, which is also shown on XBB's Overview page. As of July 9th, the number is 6.80, meaning that for every 1% rise in interest rates XBB's price (i.e. the market value of the bonds in its portfolio) will fall about 6.8%. If we take a figure within the interest rate band we mentioned at the start of this post, say a 0.7% rise in interest rates, and multiply that by 6.8 we get a 4.2% drop, which is reasonably close to the price drop of 4.3% for XBB in the chart above. We note in passing that different bond funds will have differing Durations due to their holdings, as we found when we made compared fixed income alternatives in a previous post.

Premium bonds decline in value with time
All bonds mature at par ($100) no matter what price they were bought at. As we have already noted, XBB's portfolio consists almost entirely of bonds paying higher coupon rates than the required return /current interest rates..That means they are worth more and they sell for a higher price, which is why they are called premium bonds, i.e. priced above par.  But as time passes and they inexorably get closer to maturity, everyone knows that they will be redeemed at par at maturity. So the premium price declines steadily. XBB's premium bond portfolio will decline in value and price even if interest rates stay constant. Nevertheless, the investor is not doomed to inevitable net losses, since the higher coupon rates are still being paid out. The Yield to Maturity (YTM), also published on XBB's Overview page, tells us investors exactly what net return we can currently expect from XBB given the opposing effects of bond prices and interest received.

Rising interest rates will cause bond prices to fall and the premium prices to be eliminated. With XBB's YTM at 2.64% as of July 9th and the coupon rate at 3.87%, there is still more than a percent rise in interest rates to go before the premium bond effect disappears.

Return
In figuring out what will happen to the net return from XBB, the place to start is Yield to Maturity (YTM). The rise in interest rates meant the overall market required a higher return from bond investments. The higher required return is reflected in a rise of XBB's YTM. At the end of March 2013, the YTM for XBB was 2.23% (per the iShares Fact Sheet) and had risen to 2.64% on July 9th (see also the YTM chart for the past year from the index provider).

But hold on, the observant reader may say, XBB just went down 4.2% in a month due to the interest rate rise and there would not have been enough interest cash paid out to compensate the big capital loss. How and when can an investor expect to make a positive return. How does YTM figure in?

Re-enter Duration as the "no net loss" time indicator
Duration has another meaning than sensitivity to interest rates. A calculation called Macaulay Duration (see Wikipedia details) gives a time in years at which the weighted average of the cash flows (interest and principal repayments) from a bond, or portfolio like XBB, are received. The significance for the investor of Macaulay Duration is that it will give a pretty close approximation of how long an investor needs to stay invested from the moment of buying XBB to be sure to make very close to the YTM as his/her return. Buy XBB today, hold on for the current 6.8 years duration, and the return will be about 2.6% - no matter what interest rates do till then, up or down! Whatever is lost on capital is made up by interest, or vice versa. Note that there are some sginificant assumptions that contribute to the accuracy of the approximation, such as all short to long term interest rates moving by the same amount when they change, and that yields of all bonds are equal (which is not really true as can be seen by listing the XBB holdings and comparing the individual bonds' yield to worst values). The calculation for sensitivity, called Modified Duration, differs slightly from Macaulay Duration but numbers are very close, such that it doesn't matter much for practical purposes of an individual investor in XBB that the iShares website's published Duration figure is in years (Macaulay) but the popup explanatory note talks of sensitivity (Modified).

MER taketh away return but rolling down the yield curve gives it back
In addition, XBB's management expense ratio would need to be subtracted from the YTM, though there is a good argument to be made that the constant pushing out of bonds reaching the one-year to maturity point serves to increase the yield somewhat (the so-called rolling down the yield curve strategy- see notes and links in this Finiki post) such that the effects offset each other.

Return of Capital (ROC)
It is normal for XBB to throw off some ROC when new shares are created and the fund distributes cash according to the payout rate before the interest has really been generated by the new units. This would normally be quite small amounts unless XBB undergoes a huge inflow of investor money, such as happened in 2005 when XBB quadrupled in assets. In effect interest income is transformed into tax-deferred ROC. See also Rob Carrick's discussion of ROC in this Globe and Mail article.

Capital Gains
It is harder to predict exactly how much capital gains will be distributed in future though rising interest rates will operate to decrease gains, even up to the point of elimination if rates rise enough. XBB generates capital gains when its index tracking procedure forces it to sell bonds and those bonds are worth more than when they were purchased. We noted above that premium bonds decline steadily in value towards par as they move towards maturity. That tends constantly to reduce gains.

Bond rollover in XBB at one year to maturity won't generate gains
A predictable part of the turnover of XBB's portfolio is when bonds reach the point of one year to maturity and they are sold since they are considered at that point to be a money market security. Sorting the XBB holdings by maturity on the iShares website allows us to see that only 3 of 65 bonds that will get to within one year of maturity during the next twelve months have a coupon rate below its yield. In other words, these 62 are all premium bonds which will have declined in value since purchase from the natural decline towards par and from the recent rise in interest rates. There will be very little capital gains realized from selling those bonds.

What to do about rising rates
We investors have two choices - either hold XBB at least 7 years or so till its Duration, or buy a shorter Duration fund and accept the lower return that comes with it.

Disclaimer: this post is my opinion only and should not be construed as investment advice. Readers should be aware that the above comparisons are not an investment recommendation. They rest on other sources, whose accuracy is not guaranteed and the article may not interpret such results correctly. Do your homework before making any decisions and consider consulting a professional advisor.
Posted by CanadianInvestor at 12:01

You mention that "XBB is likely to start generating capital losses, which are not distributed to shareholders." Why is that? Are they carrying forward these losses to offset future capital gains?