Investing Ideas from Norway, Home of a Humongous Pension Fund

When we reviewed the investing practices of Canada's three largest pension funds a few years ago, we discovered a number of ideas useful to individual investors. However, we also found that some of their strategies - pursuing absolute return strategies, making large private equity investments, direct investment in infrastructure or timberland - are really not available to the average individual investor. Step forward the national investment fund of Norway, the Government Pension Fund Global (GPFG). It was set up to invest Norway's oil money, to ensure that the oil wealth would be maintained for the long term to benefit future, as well as present, generations of Norwegians. GPFG happens to be the world's second largest retirement fund according to Pensions and Investments, with assets of $712.6 billion, dwarfing the Canada Pension Plan's $184.4 billion. And it has been quite successful. In their excellent review paper The Norway Model, business professors David Chambers, Elroy Dimson and Antti Ilmanen call it "... an exemplar for investors around the world". Best of all, its methods are very simple, a model that can be reasonably easily emulated by ordinary investors.

Pursue the market return
Starting with a belief that markets are largely efficient, GPFG follows a coherent set of policies:

Equities provide most of the return not bonds
Another key belief is that equities, albeit riskier, will provide more return over the long run than fixed income. GPFG's policy is to allocate 60% to equities and 40% to fixed income. The fixed income is 99% investment grade (rated BBB- or better), lower yielding but safer. Up to 2007, the allocation to equities was only 40%, but was then increased to 60%. This allows GPFG to more confidently pursue its 4% long term real return objective.

The investment policy allows Real estate to form up to 5% of the total asset allocation, taken out of fixed income's 40% target.   Individual investors can take away the idea that a diversified balanced asset allocation works well.

Slow evolution of investment policy
Another idea that individual investors can apply from GPFG's example is that its investment policy has evolved very slowly, as the chart below from the Chambers paper shows. GPFG is only now dipping its toe into Real estate despite a policy change dating back to 2008 - the share today is only 0.9% of the portfolio, well below its allowed target. The decision to shift upwards from 40% to 60% allocation took nine years. The GPFG has a lot of studies on its website on other possible investment strategy changes, such as tilts to small caps and value stocks, but it is moving slowly to implement them. The deliberateness helps ensure the strategy is followed, especially in times of market turmoil. Once a good basic strategy is in place, the idea of thinking twice and making changes slowly is a sensible example for us all.

Leverage avoided
Though its policy allows up to 5% leverage, GPFG currently has none. The idea of trying to boost returns by leverage is shunned. If the GPFG can achieve a 4% real return without leverage, why should individual investors bother?

Volatility and tracking error help manage "stay the course risk"
The GPFG belongs to all the people of Norway and the arm of the central bank that manages the fund makes a lot of information available. High transparency is an explicit aim and that allows deep public scutiny. During the 2008 financial crisis, GPFG under-performed both its equity and fixed income benchmarks by quite a bit, which caused much public criticism. The public debate that included proposals to de-risk the fund's strategy took some time. Meanwhile, the GPFG kept to its asset allocation policy, including rebalancing, and by the end of 2009 it had recouped all its losses and kept going strongly in 2010.

The immediate public pressure was relieved, but a key lesson came out of this that is highly applicable to individual investors. Setting reasonable expectations is a critical step to being able to keep to a plan - knowing how much the total portfolio could drop (it was down 23.3% in 2008) despite diversification and a sound conservative plan; investing in markets entails facing volatility and the more every investor, whether Norwegian or Canadian DIY online investor, recognizes it, the less likely panic reactions and selling out at the worst time will occur. Surprises, especially nasty surprises, cause extreme irrational reactions. The GPFG publishes its quarterly estimate (see slide 10 of the latest 3Q2013 quarterly report here) of how much the fund value could vary within the next year).

Investing to a benchmark is another clever and effective technique for controlling bad reactions - if everything is down and one's own portfolio is down the same, the pain is a lot less - misery loves company. For an individual, investing in a broad market ETF means doing no worse than the average and that means plenty of company.

Part of the reasonable expectations should be the fact that a 4% return is to be achieved over the long term, not each and every year. There will be considerable ups and downs quarter to quarter and year to year, even for a balanced fund like GPFG, as slide 8 of the same quarterly report shows.

Rebalancing is an essential discipline
A big part of the reason that the GPFG bounced back so quickly is that it followed its rebalancing policy, which sets a limit of +/- 4% from the policy targets of 60% equity, 40% fixed income. Such a policy-spurred rebalancing has happened only twice since 2002. One of the fund manager's research notes shows that the rebalancing policy boosted returns. The constant inflow of new oil money added to the under-weight asset class, just like an individual investor would do with contributions to his/her account, allows regular small-scale rebalancing. In other words, an easy to monitor, simple, mechanical rebalancing policy works quite well.

No currency hedging
The GPFG does more or less zero hedging of the currency fluctuations of its vast portfolio, 100% of which is foreign. The exposure to the variation of 35 international currencies against the Norwegian kroner at different times boosts, or reduces returns, as this chart image taken from the 3Q2013 quarterly report shows where the light blue kroner rate changes in each quarter vary between positive and negative. 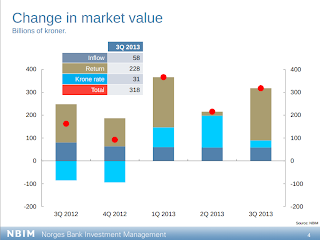 If an investor has a well diversified portfolio with exposure to many currencies and is willing to withstand more short-term volatility, perhaps it is not necessary to buy currency-hedged ETFs.

Low costs are key
A critical part of the strategy to obtain the market return is to not have it eaten away by costs and fees. The GPFG is managed almost entirely internally, while individual investors must use funds to gain broad diversification, but the fund puts great emphasis on keeping its costs as low as possible, achieving 0.09% management costs since 1998. There is more than $2 billion managed by each employee on average. When searching for funds, we investors should always look favorably towards lower MERs.


Environmental, social and governance aspects are integral to investment decision-making
Though it is mainly the public will of ultimate owners Norwegians imposed through the political process that accounts for the GPFG's active consideration of ESG factors, the professional fund managers believe paying explicit attention to six key areas of ESG will enhance long run fund performance. GPFG managers are active shareholders, not only voting at annual meetings of companies but also lobbying them to make improvements and changes. It is possible and likely financially worthwhile (see references in links below) for an individual investor also to factor in ESG, either through ETFs based on these factors, or to do this directly for separate companies, as we have explored with REITs, consumer-facing firms, oil and gas and mining companies.

A caveat with ESG is that everyone may not always agree on what constitutes good/bad behaviour. The GPFG has only a handful of companies it excludes from its portfolios due to bad behaviour. Two of that tiny (52 companies worldwide) shunned minority happen to be Canadian mining companies we have examined in the last few weeks and found to be quite pro-active in implementing ESG - Barrick Gold and Potash Corp! Yet both these figure in multiple "ESG best" lists and Potash Corp is even part of the iShares Jantzi ETF (TSX: XEN) selected for ESG superiority.