Last week we laid out what by historical standards are the modest future long term returns investors can expect from Canadian stocks and bonds. Since most Canadian investors also include an allocation to equities of the USA and other countries, this week we'll review the indicators of their likely future returns over the next 10+ years.

Method 1 - Current Dividend Yield + Dividend Growth
The idea is the same as that in our post about Canadian stocks but since US companies make heavy use of stock buybacks (see this Credit Suisse article) to return money to shareholders instead of dividends, we'll adopt the modification that takes account of buybacks and new share issuance to derive Shareholder Yield. Patrick O'Shaughnessy at Millenial Invest recently explained Shareholder Yield and graphed its historical actual values for the US equity market, which currently looks to be just under 4% - we'll use 3.9%.

Then we add potential dividend growth based on growth of the overall US economy. Forecasts of long term US GDP growth vary from the Conference Board's Global Outlook of about 2% as an average of the two periods from 2014-19 and 2020-25, to the US Federal Reserve's 2.2 to 2.4% cited by Rick Ferri back in January. We multiply those GDP forecasts by the 0.6 proportion that flows through on average to shareholders (as we reported in our original post on future return expectations, research shows that GDP growth gets diluted and does not translate into as much shareholder return) to get a range of 1.2% to 1.4% annual dividend growth.

Method 2 - Shiller's Cyclically-Adjusted Price Earnings (CAPE) Ratio
Yale professor Robert Shiller found that a P/E that adjusts earnings for inflation and averages over the past ten years smooths out economic cycles in calculating a Price/Earnings ratio for the US stock market. The adjusted P/E or CAPE gives a good indicator of probable future long term stock returns. The higher the CAPE the lower the future returns. Clifford Asness of AQR Capital explains the ratio in more detail and defends its usefulness in An Old Friend: The Stock Market’s Shiller P/E.

The CAPE is now over 26, which is very high by historical standards, as this chart from Guru Focus shows. Note the tiny implied future annual return, a mere +0.6%! 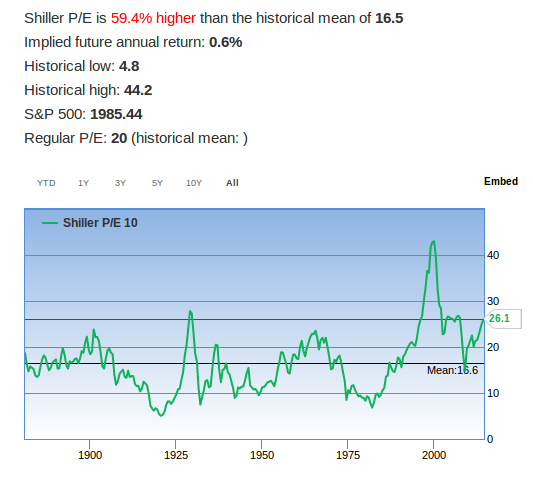 The following chart from a post at the Blakeley Group shows what happened to subsequent S&P 500 returns at various CAPE levels through the past 114 years. 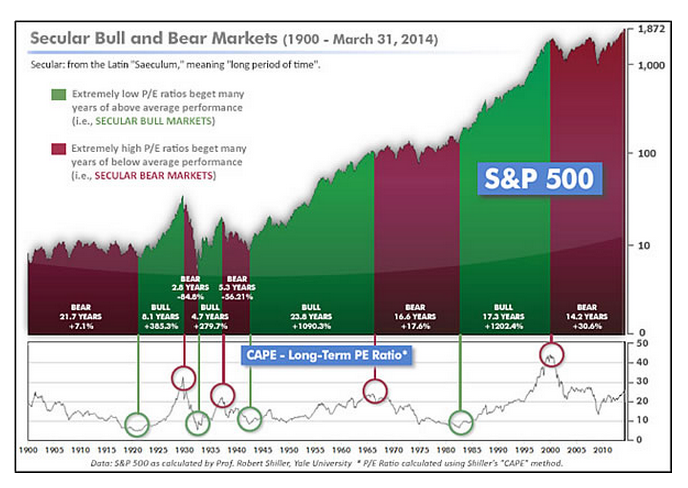 However, the relationship between CAPE and US equity returns has a fair degree of variability - all is not deterministically and rigidly fore-ordained. Asness includes a table showing that for CAPE over 25, subsequent annualized 10-years have ranged over a worst case of -6.1% to a best of +6.3%.

Method 3 - Ratio of Total Market Cap to GDP
This is apparently Warren Buffett's method of assessing whether the US market is over- or under-valued. As calculated by Guru Focus, it currently shows the US market to be significantly over-valued. Consequently the expected future return for US equities is a paltry 1%.

We would have hoped for closer agreement between the three methods but that's the situation. US equity real returns will be muted but there seems to be a high degree of uncertainty with a plausible range from 0.6% to 5.3%.

For those who wish to look at nominal returns including US inflation, simply add the Federal Reserve Bank of Cleveland's current 10-year inflation forecast of 1.8% to the real return figures above.

Developed and Emerging Market Country Equities
CAPE works about as well for other developed country markets as for the US, but less reliably for Emerging market countries, according to this 2012 paper by Joachim Klement. The Shiller P/E for Europe has been rising but is still low in relative historical terms as seen in the charts on MrMarket.EU and in this presentation by Henderson Global Investors. The latter two papers do not translate the low CAPE numbers into projected returns but Klement does and his projections, though two years old, may still be useful, especially for emerging markets which have gone sideways since 2012. His projections are for five years only. The annual compound real return for emerging markets he projects at 5.8%. For developed markets the projection in 2012 was 5.7% annual real growth, but we have seen gains of over 23% in the last year alone so a current projection will not be as high.

Guru Focus uses a method similar to the dividends plus dividend growth formula we have used above, but it explicitly adjusts for reversion to the mean of the ratio of market cap to GDP. By this method, of the 19 major countries in the table of CAPE-based return expectations on Guru Focus, every single country, both developed and emerging market, is estimated to have future returns significantly above the USA's (see chart below). Emerging markets have very high projected returns. Incidentally, we note that the Guru Focus estimate for Canada is 3.9%, which fits within the bound of other estimates we wrote about last week. 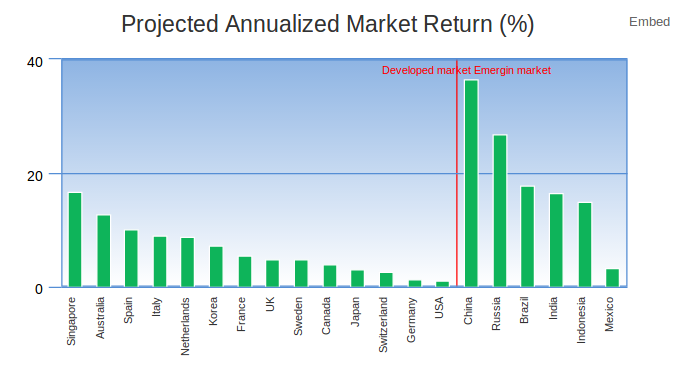 Takeaway:
A Canadian investor should look to maintain, or establish if not already there, an allocation in the portfolio to developed country and emerging market equities. The USA offers less promise of reward than those markets.

Caveat: A Canadian investor's return on foreign assets will be affected by moves of the Canadian dollar versus the currency of the foreign country equities. Though such moves tend to even out in the very long run for investors who maintain and regularly rebalance their asset allocation, as we discuss here and here, over longer periods such as ten years or more, returns may raised or reduced by foreign exchange moves. Forecasting foreign exchange shifts is too uncertain to be worth trying.

Addendum April 2016: McKinsey & Company's Global Institute is forecasting much lower returns for the USA and Europe than those experienced over the last 30 years - 1.5 to 4.0% per year lower on equities and 3 to 5% on bonds. Research Affiliates provides monthly updated forecasts of long term future returns for many asset classes, including Canadian equities, which as of the 31 March 2016 update pegged the 10-year expected real return at 3.4%.

Disclaimer: This post is my opinion only and should not be construed as investment advice. Readers should be aware that the above comparisons are not an investment recommendation. They rest on other sources, whose accuracy is not guaranteed and the article may not interpret such results correctly. Do your homework before making any decisions and consider consulting a professional advisor.
Posted by CanadianInvestor at 11:11